Roads in Jalisco: Carriers demonstrate on the road to Chapala due to nonconformities

Due to disagreements such as insecurity on the roads, complications with the SAT, the bike paths and the restriction of hours to circulate around the city, carriers from the Mexican Alliance of Carriers AC (AMOTAC) demonstrated this morning.

From 8:00 a.m. they began to concentrate on the highway to Chapala shortly after the Periférico and on the Guadalajara-Zapotlanejo highway.. Although they announced blockades on the tracks yesterday, Monday, the carriers did not impede traffic and only took the far right lane to meet.

The AMOTAC delegate, Eduardo Maldonado, who attended the demonstration on the Carretera a Chapala, explained that the protests are taking place at a national level, with insecurity being one of the main annoyances for carriers, despite the fact that they have already had meetings with the Government of Jalisco, who assured them that security would be reinforced in the city and on the highways. At the Entity, he said, Macrolibramiento is one of the most insecure ways for your transfers.

“The assaults are up to date, we have had up to four or five daily assaults. They are not just robberies, they have been stoning us, I think the stones are over 10 kilos, and they have been damaging vans and trucks. Los Altos de Jalisco also, in San Juan de los Lagos, Jalostotitlán, Lagos de Moreno, La Chona and here on the Autopista a Colima”, said the delegate.

What they asked of both local and federal authorities in the face of the disappearance of the Federal Highway Police (now the National Highway Guard), It is that a coordinated strategy is established that provides them with security, since they have registered deaths of colleagues, and even many others have chosen not to work anymore..

Another point that dissatisfies the union members is the restriction of hours so that cargo trucks can circulate in the city, which currently the hour restriction is from 6:00 to 9:00 a.m. from Monday to Sunday at the seven entrances to the metropolis. . 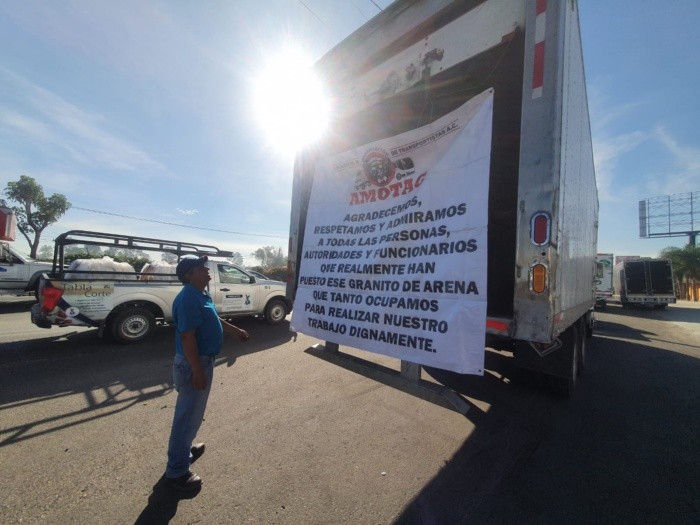 “We have told them to make statistics, because they say that cargo transportation is what causes chaos. Previously, the cargo truck entered the city with its delivery appointments, now they all enter at nine in the morning and then there is chaos, so that is not the solution for traffic here in the city”, assured the delegate .

In the protest of the Autopista a Colima, another of the transporters pointed out that the request for the Carta Porte by the SAT, required to guarantee the legal transport of merchandise, has become a headache, because with the fiscal changes it happened from being a five-minute procedure to taking up to 45.

It will be at 1:30 p.m. when the representatives of the national AMOTAC meet with the federal authorities at the Government Palace awaiting a response.. Meanwhile, in Jalisco, the union members remain at the points mentioned, alert to the indications received by the Alliance, so it is unknown until now if they will move from them later.