In January, fiscal stimulus hit the collection of IEPS for gasoline; fell 56.3%

The rise in oil prices, which has led to the implementation of a greater fiscal stimulus for gasoline, has taken its toll on the public treasury, according to tax collection data released by the Ministry of Finance and Public Credit (SHCP) .

Yes OK the rise in oil prices allowed oil revenues to increase 35.1% annually in January, The story was different for the collection of the Special Tax on Production and Services (IEPS) on gasoline.

In January, the IEPS on gasoline left a collection of 11 thousand 315 million pesos, which meant a decrease of 56.3% compared to the same month of 2021. This fall is associated with the fact that, given the high levels of oil prices and their impact on the price of gasoline, the government increased the fiscal stimulus to this tax in the month, that is, they stopped collecting a part of the IEPS on gasoline. .

In this way, the IEPS registered its biggest drop since the government stopped subsidizing gasoline, in 2015, in addition to being its lowest level for the beginning of the year, according to information from the agency.

“The government seems determined to sacrifice other income in order to look good with the most difficult voters to convince at the polls, the middle class,” said México Evalúa, recalling that as of March a complementary fiscal stimulus was implemented for gasoline. , with which more falls in collection are expected because “the de facto system prior to the tax reform is being returned, when gasoline prices were subsidized, which is not a good way to use public resources.”

According to the estimates of México Evalúa, in January only 47% of the total possible IEPS was collected, due to the fiscal stimuli that were implemented, which translated into a collection loss of 12 thousand 700 million pesos, equivalent to 95% of the annual budget of the priority programs of The School is Ours or Production for Wellbeing.

However, he stressed that despite the efforts, the price of gasoline has increased. In January, Magna gasoline accumulated a rise of 14%, that is, 2.5 pesos per liter compared to the same month of 2020. Meanwhile, Premium 21%, which translates into four pesos per liter. 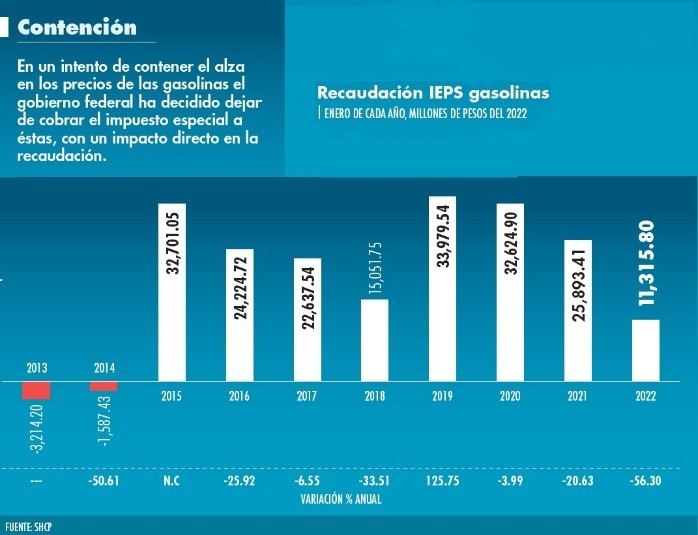 Adrián García, a researcher at the Center for Economic and Budgetary Research (CIEP), recalled that as of 2016 the price of gasoline in Mexico has been controlled to avoid abrupt increases, this through the application of a fiscal stimulus.

Last February, before Russia’s invasion of Ukraine, oil prices began to increase and, therefore, fuel prices, which caused the government to implement for the first time a fiscal stimulus of 100% IEPS on gasoline. regular and, given the insistent increase in prices, decided to implement a complementary fiscal stimulus.

“The application of IEPS subsidies to gasoline and diesel, derived from an increase in the price of oil, could generate revenue losses of around 554 billion pesos, this is 2% of GDP. Although part of this loss is offset by additional revenue from crude oil exports, the application of this type of subsidies can have a regressive effect on the population”, he added.

In addition, he pointed out that subsidizing the IEPS on gasoline is regressive, since it benefits the highest income deciles to a greater extent. Only deciles IX and X contribute 57.9% of tax collection, while the first and second deciles contribute only 3.4 percent.

Other collections that fell

However, within the IEPS, lower resources were also observed in other areas. For example, the IEPS that is charged on energy drinks left the treasury a collection of 14.6 million pesos, 23.2% less compared to January 2021.

AMLO questions the rise in interest rates by central banks: “it is the formula they always apply”

AMLO: Anti-inflation package will stop the increase in the cost of the basic basket

Mexican economy: Dollar is sold at 20.51 pesos in banks this September 29