“Medusa”, a Brazilian thriller set against a backdrop of Catholic fundamentalism

Sex, femininity, murder and religion were already at the heart of Anita Rocha da Silveira’s first film, Mate-Me Por Favor. It does it again with Medusa, which comes out this Wednesday March 16: a very Latin cocktail, being Brazilian, with nods to Italy in expressionist photography, in the wake of the fantastic thrillers of Mario Bava and Dario Argento.

In Rio-de-Janeiro, Mariana, 21, a devout Catholic, practices her religion with aggressive proselytism. She leads a gang of girls who roam the night and lynch women deemed immoral, sassy and deviant. But from an “accident”, the group begins to see its convictions disintegrate.

Medusa is a strange nocturnal film, set in a Rio that we usually associate with the sun and golden sands of Copacabana. Would this night be that of Bolsonaro governance in Brazil? Born Catholic and baptized according to the Evangelical ritual (Protestant) in 2016, the far-right president was elected by flattering this conservative electorate, insulting women, homosexuals and belching racist remarks. This is all that director Anita Rocha da Silveira stigmatizes in the character of Mariana.

From this point of view, Medusa recalls A Girl Walks Home Alone at Night (2015) by Iranian Ana Lily Amirpour, where a woman in a chador vampirizes men at night, as if to avenge the fate they reserve for women in Iran. The girls of the Brazilian gang commit their abuses with their faces covered by the same white, inexpressive, anonymous mask, which amplifies the fear for their victims. It is also the symptom of their cowardice in the execution of their acts.

A realization will take place in Mariana who will see her fellow creatures turn against her. However, it comes a little late, after a certain repetition of similar scenes. An imbalance that weakens the film, but a minor imbalance with regard to the originality of the subject, and its effectiveness within the framework of a realistic, modern and political fantasy. 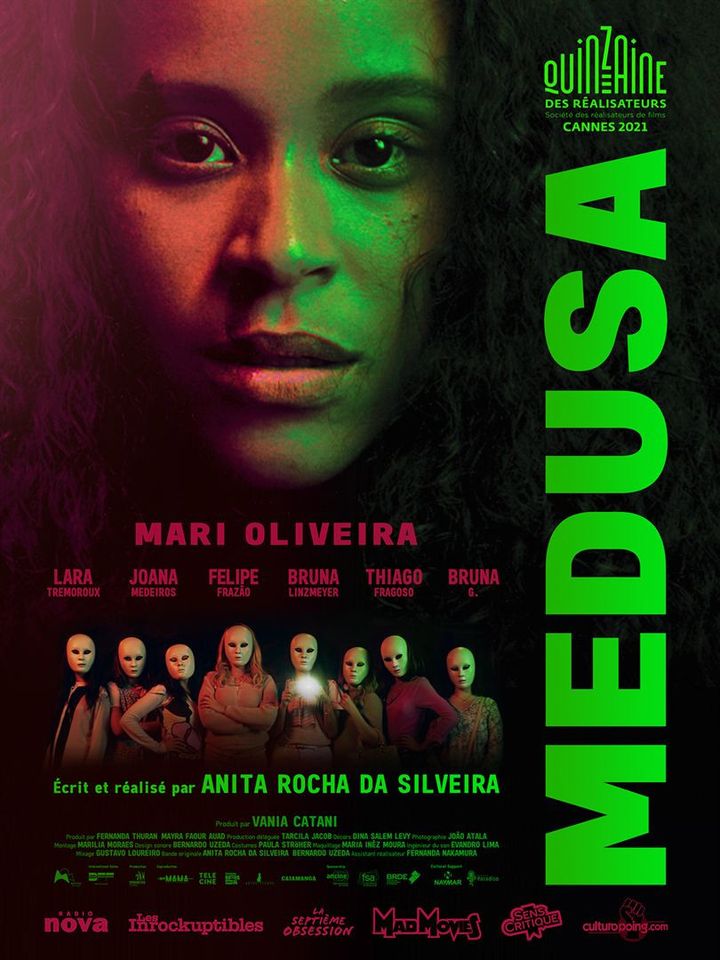 Summary: Brazil today. Mariana, 21, lives in a world where she must be a pious and perfect woman. To resist temptation, she sets out to control everything and everyone. When night falls, she reunites with her gang of girls and together, hidden behind masks, they hunt and lynch those who have strayed from the right path. But within the group, the desire to shout becomes stronger every day.