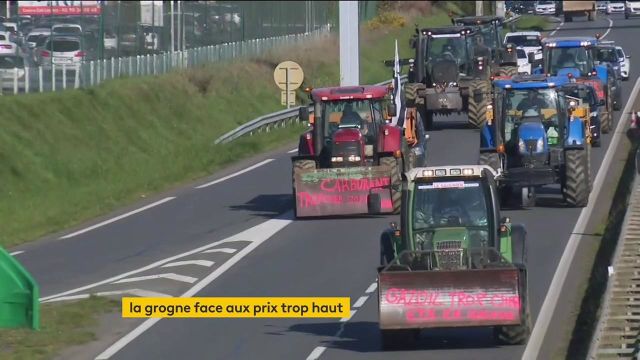 On Friday March 18, farmers, winegrowers and craftsmen wanted to make their dissatisfaction heard about the rise in fuel prices, but also about the measures deemed insufficient taken by Jean Castex.

Friday, March 18, fuel depots were blocked in Brest, Lorient, or near Rennes. To calm the anger of professionals who contest the surge in prices, the government announced aid of 400 million euros for road hauliers. An envelope which is added to the measures announced this week by the Prime Minister, and in particular a discount of 15 centimes per liter of diesel. In Carcassone (Languedoc), farmers, winegrowers and even craftsmen demonstrated against a measure deemed insufficient: “These 15 cents is really a bowl of rice. It’s almost an insult”.

More aid is also what Breton farmers are asking for, who carried out a “snail” operation near Rennes. An action to challenge the State on the increase in prices at the pump. Another worry is the soaring production costs linked to the war in Ukraine. The government has called on distributors and agri-food manufacturers to review the contracts for trade negotiations.