“Me, I don’t swing…” Abdeslam’s provocations electrify the audience 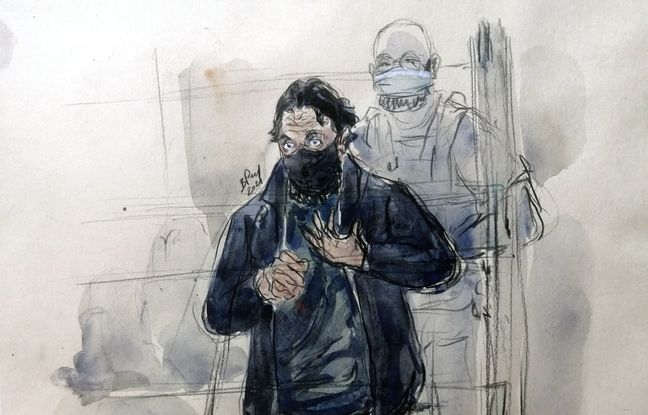 At the specially composed court of assizes in Paris,

Never, for six months, had the specially composed Assize Court experienced such tension. This Tuesday, while Salah Abdeslam had been interviewed for nearly five hours on the preparations for the November 13 attacks, the defense lawyers decided, as one man, to no longer perform their duties for the end of the day. “The serenity of the hearing is irreparably compromised for today,” said one of Salah Abdeslam’s lawyers, Me Olivia Ronen, before packing up her things, immediately imitated by her colleagues.

From the first questions from the president at the opening of the hearing, and as his line of defense takes shape, the first tensions appear. Salah Abdeslam does not deny everything but meticulously chooses the elements he wishes to bring to court. Thus, if he admits having escorted some of the terrorists, the accused affirms that he knew nothing of the deadly project which brought them back to Europe, or even their status as combatants when they were in Syria. And this, even though he spent twenty-eight hours in the car with them – “They never spoke to me about their mission” – and that he was mandated by a man whose name he refuses to give go back and forth.

According to him, it was only a question of coming to the aid of his “brothers of Islam who lived in a war zone”. “I helped them, I couldn’t abandon them”, insists, straight as an i in the box, arms dangling, Salah Abdeslam. And to make the comparison with the Ukrainians who are currently fleeing the war: “There are people who go looking for people, others who want to do humanitarian work. It’s exactly that. Wave of indignation in the courtroom.

Why then, did he take false identity papers for himself and the men he brings back to Belgium, when most terrorists are European nationals, questions the president? “No comment. Who, moreover, provided him with these papers? “I will not answer this question.” Why does he have two phone lines? ” I do not know. He even refuses to give the names of three of the five men whom he nevertheless admits to having escorted.

As soon as the questions are more concrete, specifically addressing elements of the file, Salah Abdeslam eludes. “Me, I don’t say names, I don’t swing,” he assures, multiplying the provocations towards the court, the public prosecutor or the lawyers for the civil parties when they insist. “It’s okay, are you giving birth? “, he thus gets carried away against Me Sylvie Topaloff who questions him at length on a point nevertheless essential: of the five convoys which are reproached to him, he recognizes only two – those for which there is irrefutable proof of his presence – but firmly denies the repatriation of the members of the November 13 commando.

Provocations that add to the ambivalence of his defense: not to disavow those he considers to be his brothers in arms, while only recognizing the facts for which there are material elements. Thus, if he denies having brought Bilal Hadfi, a member of the Stade de France commando, and Chakib Akrouh, from the terraces, to Europe, he confides that he could have picked them up if he had been asked. “If you had known that these two people were going to participate directly or indirectly in these attacks, would you have gone to look for them? », asks one of the assessors. Long silence. “It’s a good question,” says Salah Abdeslam. He thinks. “If these two people had in mind to carry out attacks, it is because they had good reasons. […]. But in the state of mind I was in – I was a party animal, I was having fun, I was going to get married – I don’t think I would have gone looking for them. Out of fear, perhaps…”

Put in difficulty, Salah Abdeslam loses his temper, reverses the roles, victimizes himself. “When I don’t speak, it satisfies no one; and when I speak, it’s the same thing”, breathes the accused. On several occasions, throughout the afternoon, he reproached France for having “screwed up” his life, denouncing in particular his conditions of detention. An “unbearable indecency”, according to Me Gérard Chemla, lawyer for the civil parties.

Around 5:30 p.m., yet another battle between the president and one of Salah Abdeslam’s lawyers, Me Martin Vettes, electrified a full house. While the latter reproaches him for his management of the hearing, the magistrate retorts: “Change job! A loud applause rings out. It is too much, the suspension of hearing will not calm the spirits. The trial will resume tomorrow.

New research on Reiser regarding a 1987 disappearance