The San José de Antofagasta school (Chile) has become the target of criticism on social media after a photograph of a circular addressed to parents was shared in relation to the next celebration of “Men’s Day”.

The Chilean campus informs parents and guardians in said circular issued on March 7, 2022 of the next school celebration, which immediately began to go viral among netizens They considered it controversial.

“Dear parents: We inform you that on Thursday 17, the College celebrates “Men’s Day”highlighting the values ​​of “Saint Joseph”, as the father of Jesus, husband of Mary, Guardian of his family, just man, humble, kind and above all obedient to God”, reads the letter.

“On this occasion the GIRLS celebrate their classmatessharing and participating with them in activities prepared for this day (Information in attached communication, only for girls)”, he continues.

The reactions and criticisms were swift on Twitter, where some users condemned the practice of such commemorationwhile others joined the debate specifying that said activity is of a religious nature within the school.

“It’s something religious, they do it with the Josés and Marías, a religious thing. Never put your offspring in a school like that if you’re not religious, pure chub,” says Supay de la Perla; “Out of context. That wea is done the other way around too. Women’s Day… the boys surprise the girls; dances, cards and such things”, indicates PUMA ÁCIDO in response to Pablo_86_Z, who shared this image with the message “Did you think that the Uandes thing was embarrassing? The San José de Antofagasta School thing is worse” on Twitter. 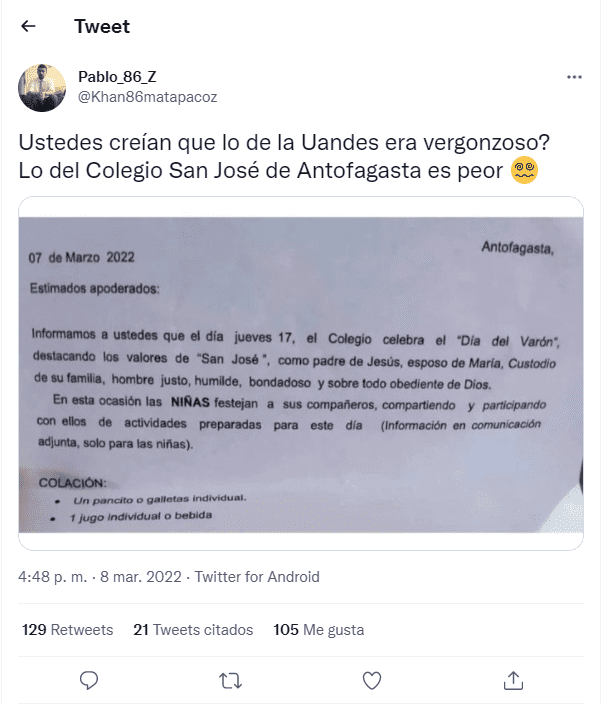 Despite the clarification of some former students Regarding the religious nature of the school celebration, many users condemned the school and its staff for promoting this practice. So far it has not been released a message from the campus in response to opinion on social networks.