‘I Thought He Was Burning His Wings’: How Stromae Overcame ‘Suicidal Thoughts’ to Prepare for a Great Comeback 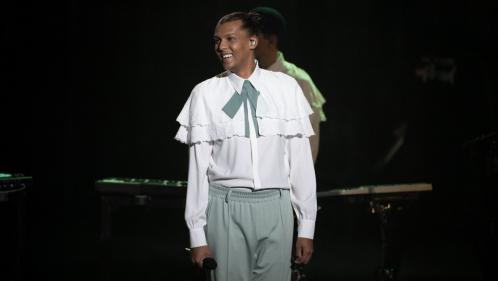 “I sometimes had suicidal thoughts, I’m not proud of it.” Tears in his eyes, Stromae recounts his depression and his “suicidal thoughts”, facing the camera, on the set of the 8 p.m. newspaper of TF1, Sunday January 9. Interviewed by Anne-Claire Coudray, he explodes the framework of the classic interview, speaking directly to the camera and recounting those thoughts that “make him live through hell.” In a title, L’Enfer, Paul Van Haver, of his real name, put into words the burn-out he went through during the year 2015, while he chained the concerts after the success of his second Square Root album.

A very noticed media passage, criticized by some, in particular by Booba on Instagrambut also hailed by others as revealing a subject, suicide, the leading cause of death among young people, as recalled the program “C to you”. On the occasion of the release of his third disc Multitude, Friday March 4, and after the remarkable passage of the Belgian at the Victoires de la Musique on February 11, franceinfo looks back on this period which could have cost the artist very dearly.

When Stromae returned in the summer of 2013 with Racine Carrée, he had to confirm the success of Cheese, his first album released in 2010. The hit So On Danse, which sold more than three million copies worldwide, made him a star. “It was like nothing, he had managed to mix electro music, Jacques Brel, Louise Attaque, urban style and French song”, deciphers for franceinfo the producer Tefa, who collaborated with the Belgian artist. In full preparation for the release of his second album, a video shot by an unknown person appears on the web. We see Stromae, eating quietly in his car, who is being bothered. The next day, this video made the headlines, obscuring the promotion of the singer. “I had put out some clips just before and the media was more interested in this video of me in my car being annoyed than a clip I put out just before… I was like, ‘ They want blood? I’m going to give them blood'”, says Stromae in 2018 in an interview with Laurent Delahousse on France 2. Thus is born the clip of great, where we discover a Stromae, drunk, strolling in the heart of Brussels, under the incredulous gaze of onlookers, mobile phones in hand. A coup staged and orchestrated by the artist and his team. The success is overwhelming, “this clip has led to everything”, notes Tefa.

A few weeks later the title Papaoutai came out, which met the same fate, and when the album came out, it was “the atomic explosion”, according to Sylvestre Defontaine, director of cultural programs for RTBF. Result: two million albums sold and an international tour that spans almost two years. “You are caught in a whirlwind, the whole planet wants you”, supports Sylvestre Defontaine. When he lands in Africa for the last leg of the tour, Stromae is “stressed, exhausted, all predisposed to freaking out, that’s for sure”, he testifies in the France 24 documentary. Malaria business: laboratories against natural medicine? “I had still done 200 concerts in two years, which was, when I think about it, an insane number”, he recalls at Laurent Delahousse. And a Stromae show requires a heavy investment. “You are pushed by the stage device, which was massive. And the bigger the show, the more physical effort it requires of you”, observes Sylvestre Defontaine.

“I saw him giving himself on stage, losing liters of sweat, I thought he was burning his wings.”

Then the inevitable happens. “As in any job, when you work too much, you get a burn-out”, slips, with hindsight, the artist. In Congo, on June 10, 2015, after a concert, Stromae cracks, in particular because of the side effects of Lariam, an anti-malaria drug. “The accelerator was the Lariam. During the concert, I did not realize, because I was convinced of the madness in which I was, I had no perspective (…) My brother had the click and realized that there was something wrong. If he had not been there I would have probably committed suicide that night, that’s for sure, I weigh my words well when I say that. If he hadn’t been there, I wouldn’t be here to talk to you today”, he admits in the France 24 documentary.

For four months, the artist disconnects completely. He ends his tour with a concert in Rwanda, in his father’s country, then disappears from the radar. “Did he foresee fame and its consequences? With such dazzling success and once he reached the top, it was very complicated for him”, asks Cédric Naïmi, author of the book Stromae (ed. Carpentier, 2014). “No one is ready for success, assures Tefa, Stromae has experienced the same thing as Diam’s”. The rapper had fallen into depression after the success of her second album In my bubble and had recounted this dark period in the last title of her career, If it was the last. “He’s a very sensitive person, but who really has his head on his shoulders. So I didn’t spontaneously say to myself that there was a breeding ground for it to go into a spin”, assures Sylvestre Defontaine. “People realized how bad he was,” continues the program director who, like his colleagues and the public, bowed to the silence imposed by the artist.

“He had lost his footing, we knew he was rebuilding himself.”

The artist simply needs a break, as he explained to the British magazine Complex in 2014: “It will take a long time before [je] get back to a normal life, and be normal myself.” “I want to make music, but also have a normal life. Of course I would always like to travel, but I’m more concerned about my mental health [rires] and seeing my family. I understand that one can go crazy with such success […] I don’t think it’s natural to get so much attention…I think I’ll need a few years to get over it.”

At home, in Brussels, Stromae is rebuilding. He becomes a father and marries the Belgian designer Coralie Barbier. A wedding organized in the greatest secrecy. “He invited his relatives, but without telling them that it was for his wedding, it was only once there that people understood why they were there, says Sylvestre Defontaine, he wanted to regain control.” He also launched his clothing brand, Mosaert, an anagram of Stromae, with his wife and brother Luc Junior Tam. In the spring of 2018, he came out of silence, first to talk about this brand for Paris Match Belgium, and repeats his need to breathe. “Mosaert, it allowed us to diversify and continue to work. It allowed me to work while remaining in the shadows, and that felt good,” he slips. Then on France 2 with Laurent Delahousse, where he reassures about his desire to return to music, but at his own pace: “I recognize that it’s something I couldn’t do without. On the other hand, the way I I will consider the rest, a tour, an album, it will be at a much healthier and rested pace.”

This media reappearance is coupled with a new title, Scroll, which accompanies the presentation of the Mosaert collection. But his return to the music scene is through others. He collaborates with rappers Orelsan and Bigflo and Oli, singers Vitaa, Anggun and Yael Naim. “The fact of collaborating with someone else, for someone else, allows you to keep only creativity, the fan side and sharing, without the burden and heaviness of career management” , assures Yael Naim in a report from France 2. By his collaborations distilled in dribs and drabs, Stromae proves that he is ready to come back.

In the fall of 2021, in the midst of the Covid-19 pandemic, he released Santé, an evocative title when you know where he came from, which evokes the “invisibles” of society. Before a thunderous return at the beginning of January to the JT of 20 hours of TF1. Facing the camera, he talks about his descent into hell which led him to the brink of suicide. “After more than eight years of absence, an incredible duration on the artistic level, when we say to ourselves that he will not be able to do better in terms of ‘wow’, he folded the ‘game’ once again with this performance”, analyzes Sylvestre Defontaine. “I found it inspiring and creative, assures Yael Naim, contacted by franceinfo. Talking about this theme openly is liberating and necessary. Art has a social and political role and it is important to remember that. Stromae conveys a personal message, while reaching all social strata and all ages.”

“He appropriated the television news, it’s magnificent, some people criticized it as a lesson in marketing.”

A return that confirms the artist’s aura, power and recipe. “He managed to mix heavy subjects and make them dance on it”, summarizes Cédric Naïmi. “A verse that makes you want to kill yourself in the face, and a chorus that makes you want to picnic”, had one day launched Jamel Debbouze in “Complement of the investigation”.

“He seizes the subjects that affect him, it turns out that here it was suicide. He did not do it to make a hit”, advances Sylvestre Defontaine. But this service, in addition to the controversies it triggered on the notions of interview and promotion, also shone the spotlight on a taboo subject. “It is extremely important because we are finally bringing to light the fact that suicidal thoughts are associated with shame and guilt”, explains Charles-Edouard Notredame, psychiatrist at the University Hospital of Lille (Nord) and coordinator national for 31 14, the national suicide prevention number, on franceinfo.

“Finally, it means giving our youth the opportunity to identify with a person who has a very strong charisma, talent, and to be able to identify also with the malaise that they can feel and allow themselves to experience. to speak. “

A subject even more ignored in the artistic community, according to Yael Naim. “In the artistic world, we have never really been able to put our finger on mental health. As it is an environment where it shines, we distinguish and we listen less to the first signs of distress, but it is an environment where the risk of depression exists. This is a subject that is beginning to be treated more seriously by initiatives such as theInsaart (Institute for the Care and Support of Artists and Technicians) and the Cura collective“, adds the artist. “Under the pretext that music is a passion profession, we are to be forced to thank you, we have to support everything, it can become a trap”, abounds with AFP Sophie Bellet, psychologist and one of the responsible for the study of Insaart, who was also an artist manager.

Even WHO boss Tedros Adhanom Ghebreyesus wanted to thank him on Twitter. A consequence that Stromae had probably not foreseen. He only considers talking about things that people can experience. “My music is often defined as being rather joyful with themes that are a little darker, a little sadder, that’s a bit how I see life, it’s not completely white, it’s not completely black, there are difficult times, happier times, and it’s always alternated”, underlined the artist on TF1. Before probably summarizing what makes the strength of his songs: “There are no highs without lows, no lows without highs, that’s life.”

If you need help, if you are worried or if you are confronted with the suicide of a member of your entourage, you can reach 31 14 24 hours a day, 7 days a week. Line suicide listening can also be reached on 01 45 39 40 00. Other information is also available on the website of the Ministry of Solidarity and Health.