Social theater according to Eva Kotatkova 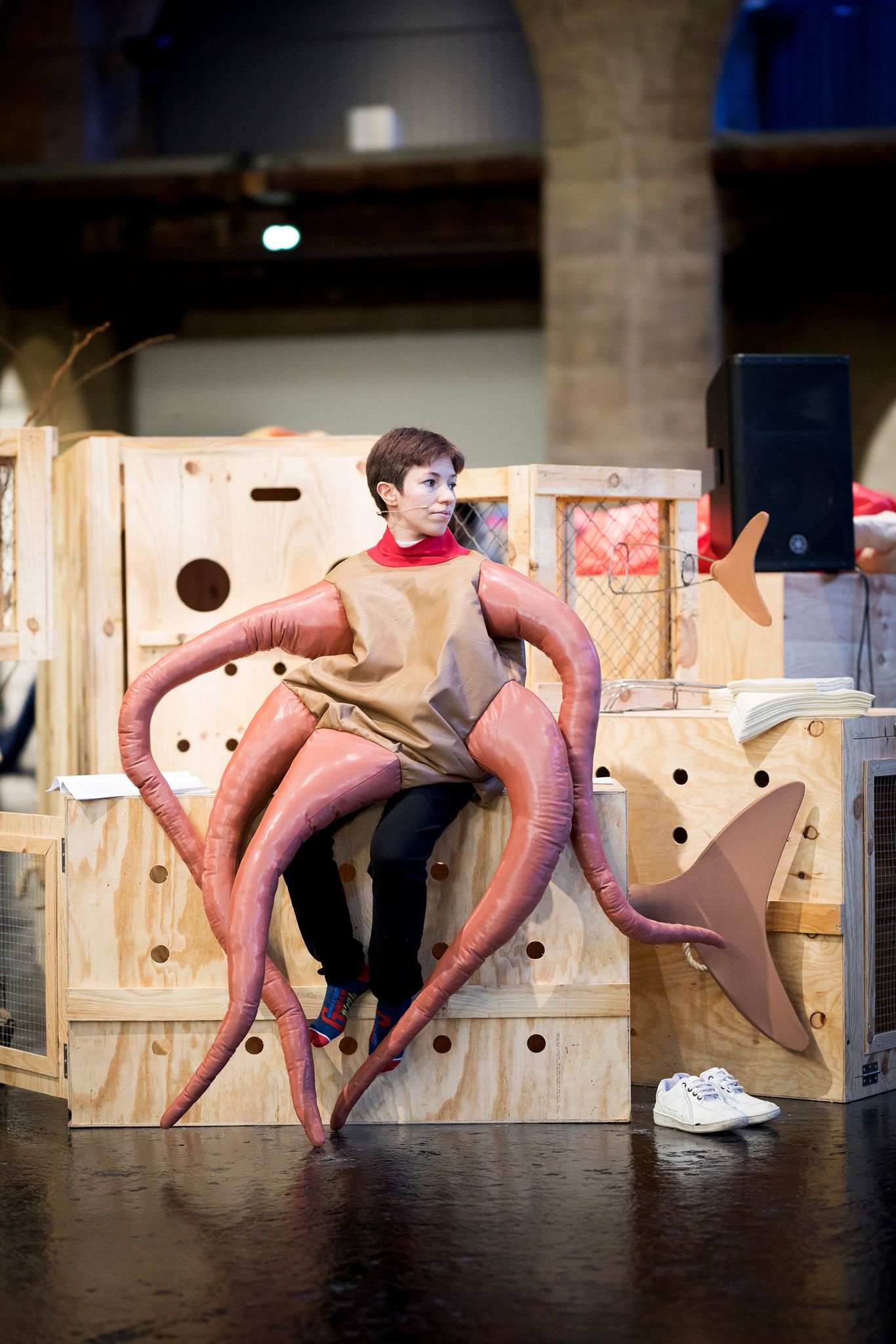 The steel carcass of a gigantic fish lies on either side of the nave of the CAPC Museum of Contemporary Art in Bordeaux. In the middle, as if emerging from the animal’s belly, among half-open mesh boxes, strange costumes in bright colors, in the shape of octopus, starfish or coral, seem to be waiting only for an interpreter. to come to life… Invited to exhibit in this former maritime warehouse, the Czech Eva Kotatkova has transformed the space into a veritable theater stage. Strolling through this scattered setting, the visitor picks up snippets of stories, recorded or sometimes told live by actors, twenty-one stories that all speak of beings uprooted or discriminated against…

In 2013, at the age of 31, the artist caused a sensation with Asylum at the Venice International Art Biennale. This vast installation presented metal cages and corsets mixed with images, cut out from magazines or books, showing gagged, tied up figures. Two years earlier, the young woman had already deployed at the Biennale de Lyon a Re-education Machine that looked like a torture chamber for recalcitrant schoolchildren and a printing press transformed into a censorship office. “As a child, I grew up in a very traditional and normative school. This inspired my first works. All my work focuses on how individuals are shaped by social norms,” explains this graduate of the Academy of Fine Arts in Prague.

It’s hard not to see the legacy of the Czech surrealists here, marrying the unconscious and the absurd in corrosive assemblages. Another reference: Kafka and The Metamorphosis, where the main character wakes up one day prisoner in the shell of a cockroach. “We talk less about the fact that the writer was a vegetarian, that he had a very sensitive relationship with nature, far from any anthropocentrism”, specifies Eva Kotatkova.

Daughter of a writer and philosopher father and a clerk mother, she says she is also very influenced by great feminist figures. The different roles – of mother, wife, worker – that women have to play are also the subject of a small exhibition annexed to the CAPC, in which the artist presents puppets made with his mother, Dana. One of the dolls has a thousand arms like an octopus, the other is crumbling under the weight of shopping bags, while another in thorn-covered pajamas dreams of being finally left alone…

After favoring blunt metal structures, his work has thus integrated, for several years, more textile elements, like a liberating counterpoint. “They bring qualities of gentleness, inclusion, empathy,” emphasizes Sandra Patron, director of the CAPC and curator of the exhibition. For example, in the head of the giant fish, mattresses are arranged to invite the visitor to sit down and listen to the stories told on a screen. As for the costumes escaping from the boxes scattered around the nave and each associated with a singular story, they seem to invite the visitor to mentally escape from his overly formatted roles, to realize his most intimate dreams, to put on “other skins to his arrangement “. Like this actress slipping into a huge pink duvet in the shape of a fin to tell the public about the emancipation of a little girl. One can imagine the excitement of young schoolchildren called upon to explore this vast playground and to make their own stage costumes around a large central table!

Only downside: the unequal quality of the stories, written or collected by the artist, ends up scattering his subject and turns to political correctness. In her desire to denounce all forms of discrimination, Eva Kotatkova jumbles together the situation of invisible night workers, refugees, the homeless, the disabled, homosexual or transgender people, patients in a psychiatric hospital, the body “controlled” women, a shrimp thrown into a pot of boiling water and an exotic bush transplanted to the West. The title of the exhibition itself, “My body is not an island…that you could colonize” refers to Bordeaux’s past as a center of the slave trade. Don’t throw any more, the nave is full!