Death of the philosopher Marcel Conche, disciple of Lao-Tseu

Author of an abundant and eclectic work, the former teacher, distinguished by the French Academy, lived in an isolated house in his native town of Altillac (Corrèze). In recent decades, he had immersed himself, among other things, in the writings of Lao-Tseu, the founder of Taoism, of which he published in 2003 a translation of his book of wisdom, the Tao te king.

To reach Marcel Conche’s house, you have to take an unpaved road and climb a little up one of the hills surrounding Altillac, a small town in Corrèze. Formerly, this rocky path was the occasion of a memorable dispute between the philosopher and his father, former mayor of the village, anxious to connect the isolated hamlets to the town.

“He had two magnificent chestnut trees cut below to make way for the paved road. I was furious, because I’ve always loved trees and wild nature,” recalls Marcel Conche, who then managed to prevent the tar from reaching the door of the family home.

Alone but surrounded by nature, it is in this isolated house that the 95-year-old philosopher, professor emeritus at the Sorbonne, lives today. A retirement that impresses for a now fragile man. “I live on the sidelines as a sage and as a philosopher,” he nevertheless replies without hesitation or detour when asked about this chosen solitude.

A wise disciple of Lao-Tse

“As wise first. After a moment of silence, with a hesitant but determined step, Marcel Conche retrieved from the living room table the Tao Te King, a famous work of Chinese wisdom, written around 600 BC.

He needs a magnifying glass, but reads in a confident voice the description given by Lao-Tseu of a country governed by sages: “A country of small size and small population where although there were instruments doing the work of ten or a hundred men, they would not be used. Where people would be reluctant to travel far, because he wouldn’t take death lightly. Wherever there were carts and boats, they would not be used…” (Tao Te Ching, chapter 80).

Marcel Conche looks at his house with its faded decoration, where a number of objects no longer seem to have much use. “I don’t use the Internet, email, tablet, or any of these new objects. I don’t travel either, he says. Why ? Because I am a disciple of Lao-Tse. » 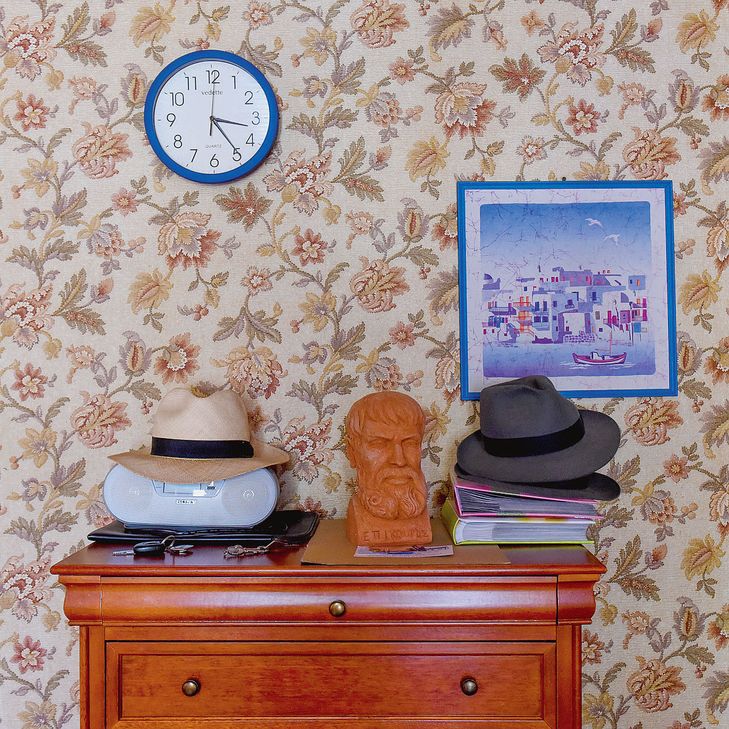 The bust of Epicurus whose wisdom accompanied Marcel Conche all his life. / Marc Chaumeil for The Cross

Already old, Marcel Conche discovered the Tao Te King, thanks to a young Corsican friend. There he rediscovered the wisdom of Epicurus which accompanied him throughout his life. A wisdom that invites us to limit ourselves to natural needs, not to invent new and vain ones. “We don’t live very long, say a hundred years,” the old man confides gravely. “Yet some people think you have to go to China and see all kinds of things. Especially gas pumps, he mocks, kindly. They also go to America, and there too they see gas pumps…”

It will be understood, Marcel Conche prefers to travel motionless. “Without stepping out of your door, getting to know the world. Without looking out of the window, see the Way of Heaven”: this is again from Lao-Tseu (Tao Te Ching, chapter 47). And a way for the old man to reconnect with Pascal, the companion of his young years, who thought that “all the misfortunes of men come from a single thing, which is not knowing how to remain at rest in a room” (Pensées , 139).

A Philosopher on the Edge

It is also “as a philosopher” that he sought the gap. Not simply a physical difference, but “a difference of will, of decision”. “Living apart. It is necessary to give birth to a personal philosophy”, he underlines. He constantly reminds us that philosophy is not a science, but a singular interpretation of the world.

Returning to Corrèze for his old years, the “wise-philosopher” found the countryside where he “devoted himself to philosophy”, “probably around the age of six, when I ventured to turning, on the road along the meadow that my father was mowing, to find out if the world continued afterwards, he likes to tell. My big question was: what am I doing here? »

The solitary child will have an atypical career within this rural family: normal school, then high school in Tulle. The decisive meeting with Marie-Thérèse Tronchon, his teacher, who will become his wife. The aggregation then teaching, until La Sorbonne where he will finish his career, teaching in Paris while residing in Versailles.

“In Paris, I felt good. I knew the Latin Quarter by heart. It was my world, but I always looked for the trees!, he recalls. Versailles, I didn’t really like. Nature is too domesticated there. And then, it is still a royal city. And me, I don’t like kings so much, ”he slips playfully. In the past, he never failed to recall that he was one of the rare philosophers in Paris “to have worked in the fields and looked after the animals”.

If the roots of Marcel Conche are in Corrèze, he does not feel like a man of loyalty to a land. “The only thing I’m loyal to is philosophy,” he says, determined. Loyalty to the child he was “who needed to go towards more knowledge, knowledge, truth…”

Carry the places in itself

However, Marcel Conche’s relationship with Corrèze is intense. “My soul is not in the places, but I carry them within me”, he wrote in Epicure in Corrèze, an autobiographical story with an eloquent title. We feel at home “where we have been happy”, he specified.

He was happy at La Maisonneuve, the house where he lives today. He lived there until the age of five with his maternal grandmother, “Maman Marie”, who took care of him after his mother’s death, until his father’s remarriage. From those years remains the memory of a simple and joyful daily life: walking in the woods with his two young aunts, drinking goat’s milk, returning with arms laden with loquats or summer fruits…

Back in this natural environment, the old man feels at his rightful place: “The hills, the sky, the Dordogne: it is the face of infinite nature which is in the inaccessible depths of things”, he describes. weighing his words. A structured whole, where “things are in their place”. “It’s reassuring, peaceful, quiet,” he shares.

In this setting of solitude, Marcel Conche can reflect on the essential, “what one cannot put aside”. He counts them three in number: “time, illness and death, nature”, he lists. “This is what the wise man lives with, trying to stay away from all the other things that men have added unnecessarily. »

To live wisely, Marcel Conche relies on the teaching of nature. Around him, season after season, he contemplates the way in which it unfolds, gently, but irresistibly. “Nature progresses from the germ to the small shrub, to the big tree, he evokes. Its strength does not impose itself as a power: it begins with the least, the weak, the most restricted, to go towards the achieved, the completed, the fortified. »

This should be the case in our lives, where “for everything, there is a way, a tao”, assures the philosopher. You have to follow your own path, but “with subtlety, avoiding any violent use of force”. 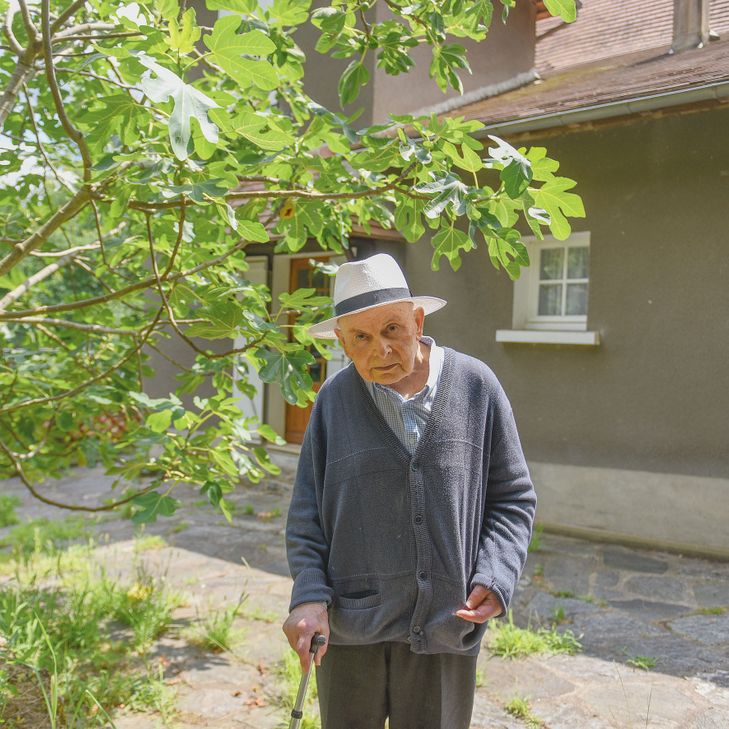 For his old years, the philosopher had chosen to return to live at La Maisonneuve where he lived until the age of five. / Marc Chaumeil for The Cross

Marcel Conche does not evade the fact that nature unfolds to decline, “a natural thing”. He who pleaded for the right to die, today accepts the idea of ​​“natural death”. “You have to die naturally, let things happen as nature wants them to,” he says.

On the “after”, he continues to profess a strict atheism. Formerly, he refused to dialogue philosophically with believers. Today, religious subjects punctuate the conversation: the evil and suffering of children, providence, sin… Curiosity for the last ends? Perhaps… But Marcel Conche built his rejection of God on a catechism that no longer exists and that he hardly has the strength – the desire? – to question.

The philosopher prefers to meditate on the Tao Te Ching: “The good man, I treat him with kindness, and the one who is not good, I also treat him with kindness: thus I obtain goodness” (chapter 49). “You will tell me that it is close to Christianity, isn’t it?, he notes with a smile. I wouldn’t say the opposite…” Before adding, almost immediately: “But faith is a grace that one has or does not have. I don’t have it”.

The Corrèze there and back, the philosophy always…

1950. Agrégation in philosophy and teaching activity, until his retirement in 1988. Marcel Conche specializes in the study of pre-Socratic philosophers (Epicurus, Heraclitus, Parmenides, etc.) and publishes translations and commentaries on their works.

1956. Educated in the Christian faith, Marcel Conche rejects the idea of ​​God, arguing that the suffering of children is an absolute evil “that cannot be justified from any point of view”.

In 1963,he discovers Montaigne whom he studies in
philosopher in Montaigne or the happy conscience (1964).

In the 2000s, he published a more literary work: his journals (in five volumes) and Epicure in Corrèze, an autobiographical account.

In 2001, he meets Émilie, a young Corsican, who will become a close friend. She introduced him to Eastern philosophy (Rumi, Attar) and the Tao Te King of Lao-Tseu, of which he published a translation and commentary in 2003.

In 2017, publication of Heraclitus, fragments recomposed (PUF) translated and commented by Marcel Conche.