Women’s Day: These are the mobilizations that will take place in Guadalajara for 8M

The next march 8 Internationally commemorates the Women’s Dayin order to make visible the need for effective equality, the violence suffered by women, and to empower women and girls.

Like every year, even during the strongest crisis of the COVID-19in Guadalajara, different mobilizations will be carried out such as marches, talks and concentrations, to commemorate this day and make visible the obstacles that women must face, involving different groups of women and girls in the city.

Various groups from Guadalajara and Jalisco have already announced some of the activities that will take place compared to 8Mand among them, two face-to-face marches and various talks and virtual forums have been contemplated so far.

“We do it because in Mexico a true war is waged against our bodies, because they disappear, enslave and murder us with total impunity.”

For example, the collective “I’m going March 8” He announced through his Facebook account that a march is being prepared to accompany the families of disappeared persons, victims of femicides and dissidence. The protest will take place on Tuesday March 8 at 3:00 p.m.and will depart from the Glorieta de las y los Desaparecidos until reaching the “Antimonumenta”, located in the so-called “Plaza Imelda Virgen”, on the Paseo Alcalde at the height of the Plaza de Armas, in the downtown area of ​​Guadalajara. 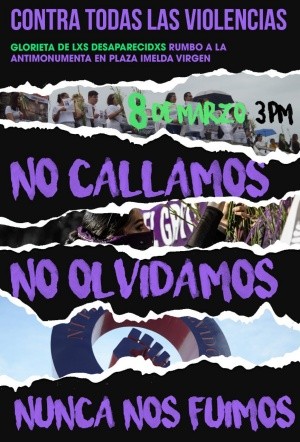 “We call on everyone to return to the streets this March 8. And we do it because of the historical debt that our societies have with each one of us. We do it because in Mexico a true war is waged against our bodies, because they disappear, enslave and murder us with total impunity. But we also take to the streets, because we know that by meeting, hugging, sharing and existing together, we face violence in all its forms”, recounts part of the message shared on their social networks.

Among the groups attending, in addition to the Feminist Front of Jalisco, there is also the well-known feminist Batukada GDL, which called yesterday for a rehearsal towards the march, which will continue until the day comes and which are made known through their social media.

In addition, the Feminist Front of Jalisco will broadcast various talks through its Twitter account to address different gender issues, such as the forum “Violence against women: criminal and family law” or the talk “Violence in the couple: cycle of violence and its types”, among others.

For his part, the “GDL Radical Feminist Front” and “GDL Radical Coven”under the slogan “In defense of the rights of women based on sex”, will carry out a separatist concentration, to which only women of birth who coincide with their ideology have been invited.

The meeting will start at 2:00 p.m. in Revolution Park, also known as the “Red Park”where different activities will be carried out to give rise to a demonstration that plans to conclude in the Secretariat of Substantive Equality for Women and Men. 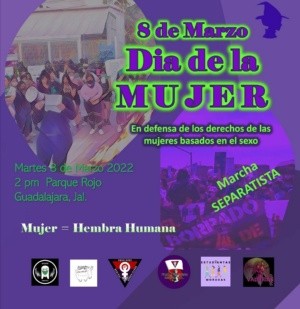 The women members of this group will also give various talks that will be broadcast on their Facebook account from March 1 to 6, with topics such as “Being a girl in the patriarchy”, “Wombs for rent and false freedom” and “Prostitution and trafficking networks”, among others.

It was on March 8, 2020, before the COVID-19 crisis, that the largest women’s march in the city took place: According to the organizers, more than 15,000 women and girls participated, while the State Unit for Civil Protection and Firefighters Jalisco reported that the final figure had been more than 35 thousand attendees.

The march, which was attended by women from all groups, and from society in general of all ages, covered several blocks of Chapultepec Avenue and covered the surroundings of the Glorieta Niños Héroes, where the concentration that began in the University Square of the Tapatío Center.