VIDEO. Ukraine: in Kharkiv, the violence of the street fights contrasts with the calm of the basements where the inhabitants are holed up 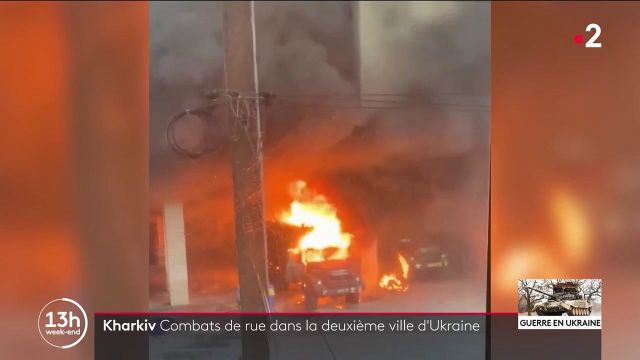 The governor finally affirmed, Sunday at midday, that Kharkiv was under the control of Ukrainian forces. But the fighting continues.

Kharkiv is the scene of violent clashes on Sunday February 27. “There was a breakthrough of the Russian enemy’s light vehicles in the city of Kharkiv, including in the central part,” said the governor of the region, Oleg Sinegoubov. As fighting raged in the streets of the country’s second city, he called on the estimated 1.4 million residents not to leave their homes. Some residents, terrified, filmed the intense fighting. “Please come to our aid, we are civilians,” says a videographer, who films cars on fire. A little further on, carcasses of Russian vehicles are inspected by armed Ukrainians.

Residents are also hiding in the basement of a downtown hotel and remain calm despite the dread. The carefree children are playing. The director of the establishment, Olga Sokolenko, watches. “It’s difficult for everyone. When you see danger approaching, it’s hard but you have to control yourself, stay calm,” she says. “The Russians will never make us their slaves,” says the father of two girls sheltering in the darkness of this parking lot.

The regional governor asks the population to mobilize and send Molotov cocktails from their windows at the Russian armored vehicles. The governor finally affirmed, Sunday at midday, that Kharkiv was under the control of Ukrainian forces. But the fighting is likely to continue.