Peloton for the Omloop in Pieters’ thoughts: ‘Amy is there, every day’ 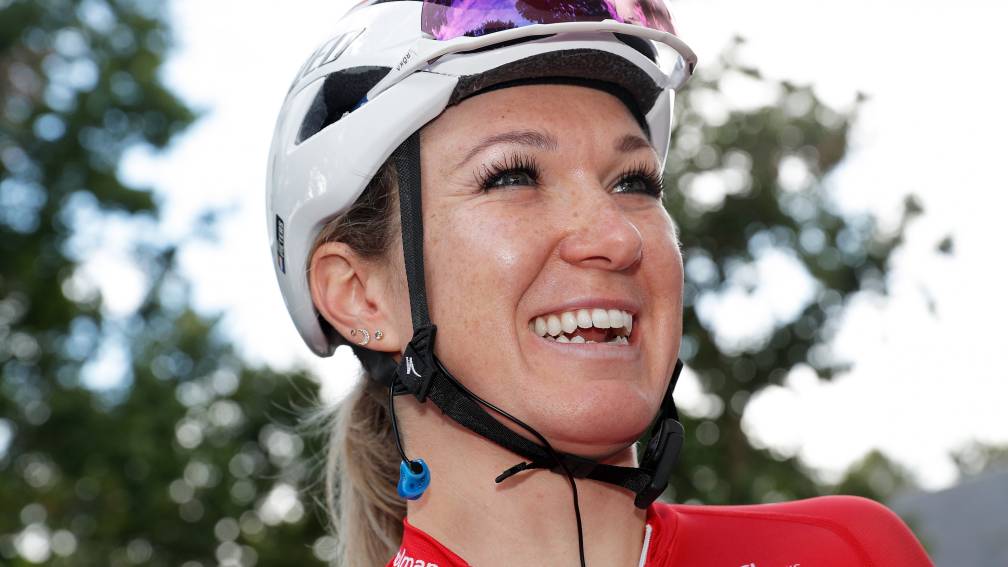 “I was standing on top of a mountain. Suddenly I see Amy approaching, a little swinging on the bike. She was doing a scavenger hunt with the plow and was fiddling with her navigation. ‘Really something for you,’ I said. We both laughed and agreed to have coffee. That agreement still stands.”

This is how Roxane Knetemann remembers her last meeting with Amy Pieters, in mid-December in Calpe, Spain.

Not much later, just before Christmas, Pieters crashes heavily during a training ride with the track selection. She sustains serious brain damage, an air ambulance has to be involved. Pieters is still in a coma, the situation ‘stable, but critical.’

The red-white-blue is missing today in Ghent at the start of Omloop Het Nieuwsblad, the race that Pieters won at the start of her career to the surprise of many. Last year she finished third.

“Of course it is very much about Amy in the peloton,” says Ellen van Dijk. “In our minds she is there, every day.”

When we call Van Dijk, she has just completed the first stage of the Valencia Cycling Week. A race in the area where Pieters had her accident. “Shortly after the accident I drove past the place during training. That was very difficult. You wonder: what are we still doing here? But in the meantime everyone is racing again. Yes, that is confrontational.”

The day after the conversation, Van Dijk wins the second stage. Then Annemiek van Vleuten delivers a mighty solo in the third stage. Van Vleuten rides the final stage with a handwritten message on the sleeve of her leader’s jersey: Stay Strong Amy. With a heart.

On the eve of Omloop Het Nieuwsblad, Van Vleuten talks about Amy Pieters and her tribute in Valencia.

Pieters comes from a real cycling nest. Father Peter was a topper on the track, became Dutch champion on the Posbank and won Paris-Tours. A few months after Amy’s birth on June 1, 1991, he became second in Omloop Het Volk. And brother Roy also belonged to the Dutch top in track cycling for years.

Girl with bow and beautiful dress

“My first acquaintance with Amy was at the cycling track in Alkmaar”, says Knetemann. “She sat next to her mother in the stands to watch her father. Amy was about six years old and had that beautiful, reddish hair with a bow and a nice dress. After the games we went out on the track together. climb up the bend and then down on your buttocks.”

Knetemann recognized herself in that playful girl with the bow in her hair. Although she became especially aware of this after the sudden death of her famous father Gerrie Knetemann during a bike ride in Bergen.

“I looked up to Amy in juniors, even though I was four years older,” says Roxane. “She was so good and so driven. No matter how young she was, she seemed to already know everything about cycling. I also saw how Amy interacted with her father and saw myself in it. We clicked, even if it was sometimes painful too.”

Knetemann said he was “blissfully happy” when Pieters asked her to form a duo in the coupling race. In 2010 the duo even became Dutch champion.

A year earlier, as a 17-year-old boy, Pieters even drove the World Team Pursuit Championship with tempo masters Van Dijk and Kirsten Wild. “Amy was young, but incredibly tough,” says Van Dijk. “Once she was in the wheel, she never let go.”

The trio finished sixth at the London Olympics. After that, the focus went to the road, where she first had Knetemann and later Wild as a teammate.

With a broad smile, Wild looks at the images of the Omloop Het Nieuwsblad for women in 2014. “Head down, tail in the air. And ram. That’s Amy.”

A few weeks earlier, Wild had celebrated Pieters’ first professional victory in the Tour of Qatar. Head woman Wild – the queen of the desert in those years – won the other three stages and the final classification. But especially the victory of her teammate Pieters has stayed with me. “She was in a leading group with Anna van der Breggen. And Amy won!”

In the Omloop she is on the road with two of the best riders of that moment: the Swedish Emma Johansson and the English Lizzie Armitstead. “Or I thought she could beat those two toppers? No, of course not. Because I was behind her as a sprinter, Amy could save her legs a bit more. How she finishes this is unbelievable!”

Pieters has never become a real winner on the road. “Amy was always good,” says Van Dijk. “If you see how many places of honor she has cycled together, I think you will be amazed. In recent years she has learned to win herself, that was really nice to see.”

Just think of the European championship in Alkmaar in 2019. And last year, shortly before the Games, she became Dutch champion on the VAM mountain after a long, impressive solo.

She enjoyed the victories, but she preferred to give the spotlight to someone else. Van Dijk: “When I became European champion in Trento she came looking for me after the finish. Of course I had to do all kinds of formalities, but Amy didn’t give up until she gave me a hug. ‘I think this is so beautiful,’ she said. That’s Amy too.”

The successes piled up on the velodrome. From 2017, Pieters and Wild formed an almost unbeatable duo on the coupling race.

“Amy never seemed to care,” Wild said. “I was always very planned, wanted to keep control. Amy was more of “we’ll see”. “All that bullshit”, she would say, “you just have to cycle fast”. But in her head she put a lot of pressure on herself up. She didn’t want to disappoint anyone.”

At the World Cup in Apeldoorn in 2018, it just didn’t work out: silver. “Afterwards Amy came to me: ‘Kirsten, sorry. You lost gold because of me’. Nonsense of course, but that’s how she felt.”

“Do you know what typical Amy is?”, Wild takes a side path. “When I asked during a race whether things were going well, she always said ‘no’. Usually she was just good. But at the World Cup in Poland a year later she suddenly said: yes! Then I knew that it was not wrong that day could go.”

It was the start of a triumphal march for the duo: three times world champion, one time silver, four times bronze at the European Championships. But no Olympic medal.

“I ruined it in Tokyo,” Wild says with regret in her voice. “I made a very stupid fall and that made us fourth. Whether I felt guilty about that? Well and whether. Terribly guilty. It was our last chance.”

Previously, 38-year-old Wild had decided that 2021 would be her last season. “After the Games I was done with it. There was another World Cup coming up, but I didn’t feel like it at all. I didn’t want to anymore, but I didn’t dare say it to Amy.”

Because the Dutch track team had not ridden any World Cup races, the problem seemed to solve itself. Until the international cycling union UCI decided to admit world champions. “Amy texted me,” says Wild. “She wrote: We are allowed! She wanted so badly. I did not dare to disappoint her.”

On October 28, Wild and Pieters were shining in their rainbow jersey for the third year in a row. “We said goodbye with a hug. That was also the last time I saw Amy.”

“That she is now in a coma because of that stupid fall feels very unfair. If she gets the chance and wakes up from the coma, she will fight. Amy is a fighter, always has been.”

Amy Pieters’ team, SD Worx, will start with a special tribute to Omloop Het Nieuwsblad on the bicycles. Defending champion and best friend Anna van der Breggen is in the team manager’s car for the first time this season.