The tigers in “Fort Boyard”, it’s over! 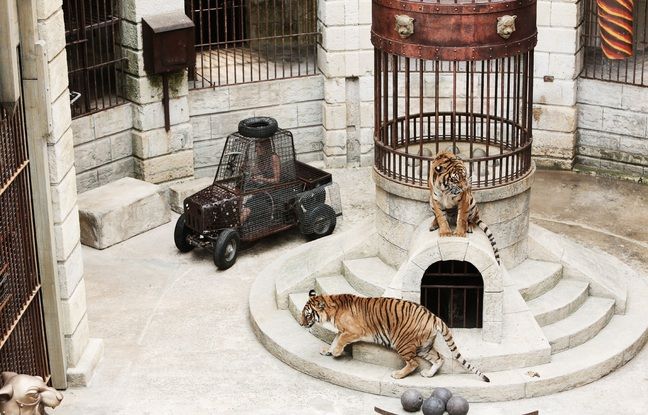 Father Fouras, Passe-Partout, a treasure guarded by tigers… All these elements already appeared in the first episode of Fort Boyard broadcast in July 1990. However, thirty-two years later, the production of the show decided to part with one of these emblems. According to our information, from this summer, fans will discover that there will be no more felines in the 33rd season of the France 2 game.

“I feel that there is a fundamental societal movement that we must hear about the protection of large animals and in particular felines”, explains producer Alexia Laroche-Joubert to 20 Minutes . If she chose not to bring the tigers into the fort, it is because she reached an agreement with Thierry Leportier, the owner and breeder of the tigers, and France Télévisions. “We are going to pay him a very large sum which ensures him the food and the care of the tigers until what we have planned to be their natural death”, she reveals.

“I did not have to withdraw the tigers before 2024”

At the end of last year, Parliament adopted a bill aimed at “fighting against animal abuse” and providing for the gradual banning of wild animals in circuses. “Barbara Pompili has nothing to do with this decision, it is important to say it, assures Alexia Laroche-Joubert. I didn’t have to retire the tigers until 2024 so we could have shot two more seasons. I only do this because I consider it an important move for our viewers to make. »

Moreover, two years ago, before the bill was adopted, the production had chosen not to replace the 15-year-old Kali tiger at the time of his retirement. “It’s a difficult decision that I have carefully considered for three years, supports Alexia Laroche-Joubert. It’s very nice to remove them from certain spaces, but you still have to know what will become of them. “Thanks to the agreement signed with France Télévisions and the service provider who has accompanied the program for thirty years, it is possible for Fort Boyard to part with its mammals in complete serenity.

No significant movement from the public

It has been several seasons since the question of the presence of tigers in the program has been raised during the summer. Several animal protection associations came forward and the participation of journalist Hugo Clément, who had refused to participate in the tests involving animals, reignited the debate.

“There was no movement of viewers, I think it’s more a movement of society”, testifies the producer who appeals to politicians. “What happens after? There are private funds but perhaps public funds can be called upon to help providers who care for animals with enormous fervor,” she notes.

As part of the show, the tigers were only present at the fort about 20 days a year during filming in the spring. From now on, during this period of the year, they will remain in Thierry Leportier’s animal reserve.

Make sure to keep the “spirit of the tigers”

While the dates for the recordings of the season are not yet fixed, the teams of the summer game of France 2 are still working to fill the void created by the departure of the felines. “There are ways to bring this universe to life through the spirit of tigers, which is a very important aspect for our audience. We are experimenting with things, we are still in artistic reflection,” comments Alexia Laroche-Joubert.

The question of embedding images of tigers, filmed during previous seasons, has even been studied. “It’s not the direction we took even if that doesn’t mean we won’t take it,” says the producer. If they are no longer inside the building, the roars of the felines could therefore be heard around a cell.