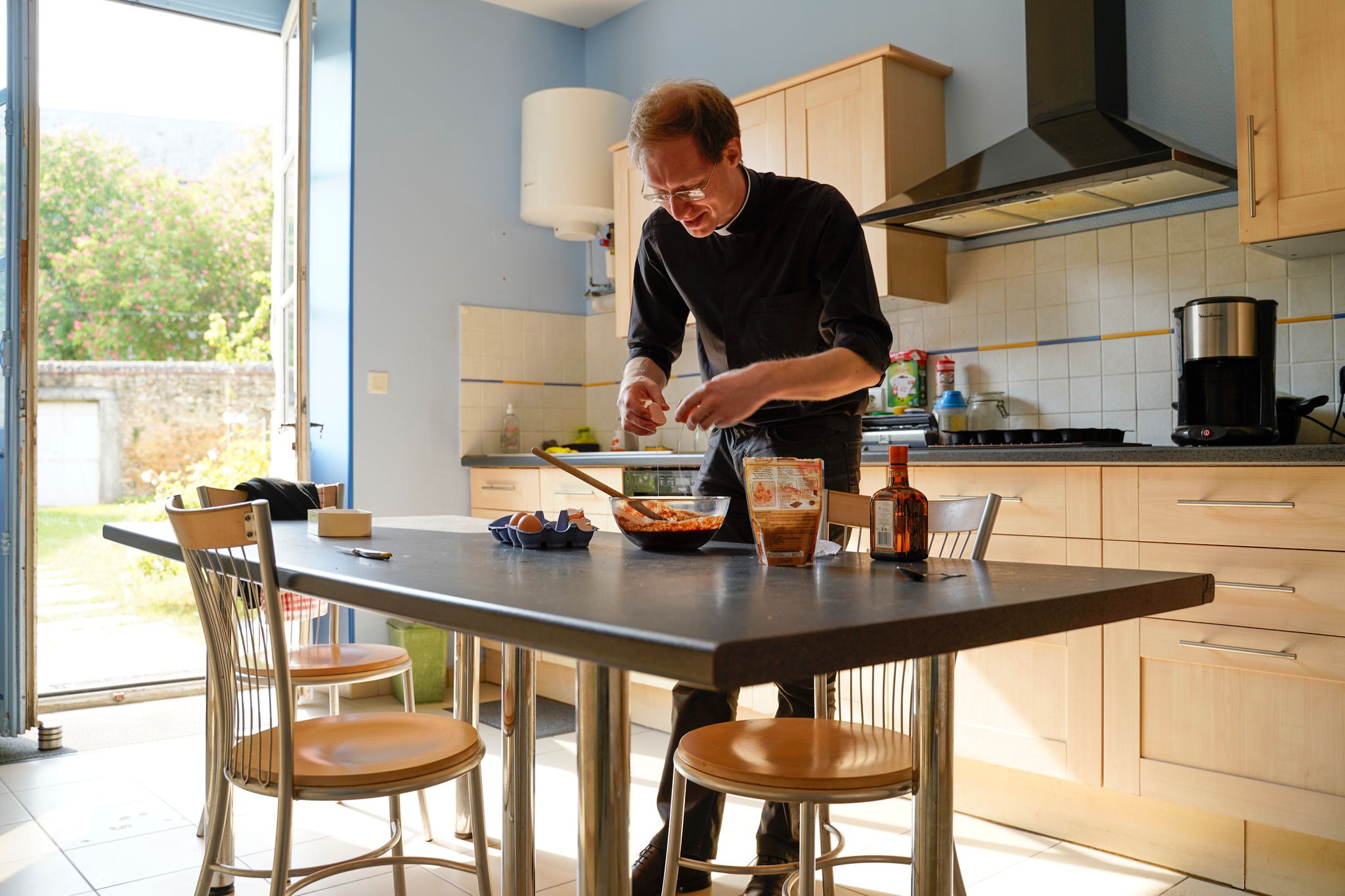 Let’s admit it: it is not so easy to illustrate an article on the celibacy of priests. We wanted to emphasize here the living conditions of many priests. A lonely man – he has a Roman collar which distinguishes him from another lonely man (there is no shortage of such in our society) – prepares a cake on the table of a functional, bright, impeccably tidy kitchen, opening onto a garden. Not all the priests are equally well housed, and neither are all their flocks, for that matter. No doubt, this cake he will share.

When we make this image a feminine reading, it appears disturbing. A priest’s wife would therefore be useful to relieve him of household chores, to concoct good meals for him? The living conditions that lead to questions about celibacy go far beyond: loneliness, advancing age, indifference from the faithful or from colleagues, the lack of solid friendships, complex relationships with women, a lifestyle that can leave something to be desired, the fatigue of very heavy pastoral charges…

Without even addressing the theological reasons for maintaining priestly celibacy or for no longer making it obligatory, imagining responding to the difficulties of a life as a priest by the mere presence of a wife is insufficient. Especially if we don’t reflect on what the life of a priest’s wife would be like. Deacon wives could help think about this, remembering that marriage is also a strong commitment.

A symposium of theologians in Rome worked on the priesthood. Celibacy was probably not at the heart of the exchanges. The pope himself, opening the meeting, recalled, starting from his own experience, that it is possible to live “with serenity” celibacy, a “gift that the Latin Church preserves”, but without friends and without prayer, he added, it can become an “unbearable burden”. Abandoning this rule would not solve the vocations crisis: Churches whose clerics are married are experiencing the same decline in vocations. It is not either marriage which, of itself, would make it possible to avoid sexual abuse: the cases of incest in families demonstrate this, alas.

→ ANALYSIS. The priest today, according to Pope Francis

However, this theme will surely come back in the national debates of the Synod on synodality, as it intervened during the Synod on the Amazon or in the debates of the German synodal path: the possibility of ordaining married men is suggested. It will no doubt also be a question of the ordination of women or, at least, of recognizing their indispensable place in the Church, by entrusting them with ministries.

Prior to any radical evolution, it is essential to question the role of the priest and his place: not a being apart placed on a pedestal, but a pastor in the midst of the people of God; it is essential to clarify the too widespread confusion between the sacrament of orders and the notion of power; it is necessary to combat “clericalism”. For this, it is also important to rethink the responsibility of the laity. Clerics or laity, women and men together, at the service of all, near or far.

The priestly vocation is demanding, as defined by Pope Francis: “Men in the midst of people”, “courageous, able to stop near those who are wounded to reach out to them” and “contemplative men”. Are we not entitled, therefore, to formulate a question that is not a claim: who can feel called to live such a vocation, men, women, single or married?