Program of the 2022 Olympic Games: Quentin Fillon Maillet for history, blue biathletes and skicross for a medal… What time and on which channels to watch Friday’s events

The 2022 Beijing Olympics continue on Friday, February 18. A day marked by the men’s mass start in biathlon during which Quentin Fillon Maillet, already historic, will try to win a sixth medal in six races in these Games.

Earlier in the day, more medals could come from skicross. Jean-Frédéric Chapuis, gold medalist during the French treble in 2014 is still part of this delegation and intends to do the double. Ice hockey, curling, bobsleigh and figure skating will also be on the program.

The Slovaks, who beat the Americans on penalties in the quarter-finals on Wednesday, find Finland in the semi-finals at 5:10 a.m. The Finns, world champions in 2019 act as favorites and hope for a first Olympic gold medal. The other semi-final will pit the Swedes against the reigning Olympic champions Russia. A meeting to follow from 2:10 p.m.

Returning empty-handed from Pyeongchang, the French skicross hope to find the medals as in Sochi, in 2014, where they had achieved a historic hat-trick. Jean-Frédéric Chapuis, gold medalist during this feat, is still there. He will be accompanied by Terence Tchiknavorian and Bastien Midol, on the podium of the general classification of the World Cup, as well as François Place. The round of 16 will begin at 7:00 a.m. The final is scheduled for around 8:20 a.m.

Moved forward one day, the women’s mass-start will precede the men’s race. A last opportunity for the tricolor biathletes, Anaïs Chevalier-Bouchet, Justine Braisaz-Bouchet, Anaïs Bescond and Julia Simon, disappointed by their 6th place in the relay on Wednesday, to seize a new medal. Julia Simon took 2nd place at Grand-Bornand in the World Cup on December 19, while Anaïs Chevalier-Bouchet, in silver on the individual, finished 3rd at Antholz-Anterselva on January 23, during the last race before the Olympics.

Last lap of honor for Quentin Fillon Maillet. Medalist five times (three silver, two gold), the Frenchman could climb to a sixth podium in as many races on Friday. Facing him, the Boe brothers, the revengeful Swedes and his teammates Emilien Jacquelin, Simon Desthieux and Fabien Claude also want to place themselves to end this Olympic fortnight well.

On this new day of the 2022 Winter Olympics, you can also follow or discover other sports such as speed skating, ski jumping or skeleton… From Friday February 4 to Sunday February 20, 2022, discover the daily program of the Beijing Winter Olympics on franceinfo: sport. 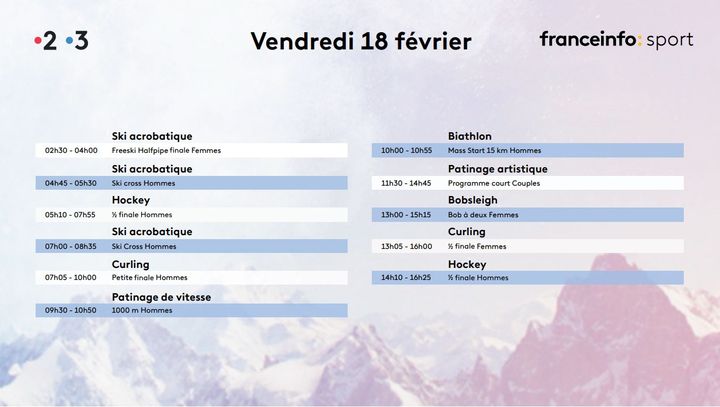