Back to the terrible fortnight of the Russian skater Valieva 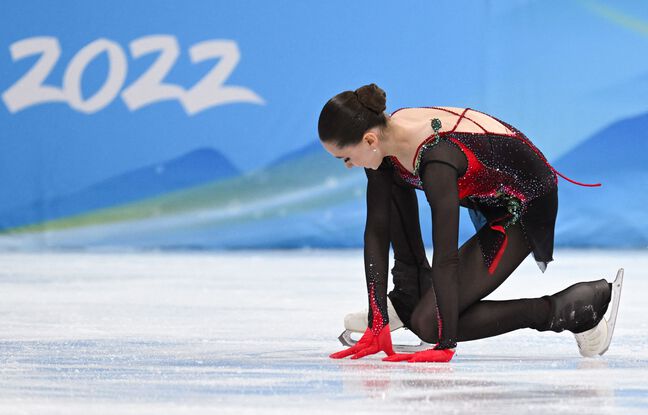 From our special correspondent in Zhangjiakou,

Whatever will give birth to this ramdam, the images are painful to see. While the eyes of the world are on her after ten days of an incredible affair of a positive test for trimetazidine, the young Russian skater Kamila Valieva, 15, enters the ice of the Capital Indoor Stadium in Beijing to the sound of Boléro by Ravel. But after only a few seconds of this free program supposed to take her to the top of the world – medal or not – the kid totally cracks and goes on a series of falls.

A first on his quadruple toe loop/triple toe loop combination, a second, even more violent with both hands pressed to the ground, on his second quadruple toe loop. The rest will be nothing but ordeal, the remaining minutes seeming never to end, even for us, huddled together with a dozen colleagues in front of a mobile phone in a restaurant in Zhangjiakou. In tears at the end of the program, the student of Eteri Tutberidze, his trainer at the famous Sambo70 center, whose sad portrait we gave you last week, could not resist the immense pressure put on his frail shoulders. teenagers for the past ten days.

From the height of her 15 years, the teenager found herself at the heart of a media and sports cyclone from which it was impossible to emerge unscathed. The day after the revelation of his positive control for trimetazindine by the Russian press and his provisional suspension by the World Anti-Doping Agency (WADA), on February 10, the coach of Guillaume Cizeron and Gabriella Papadakis, Romain Haguenauer, told us said he met Valieva in training, surrounded by “three billion cameras”. It was only the beginning of a soap opera with many twists and turns.

Appeal of his suspension by his clan on the 9th, formalization of the positive test by the ITA, the organization in charge of doping controls during the Olympic Games, on the 11th, referral to the Court of Arbitration for Sport by the IOC and WADA in the process and hearing of all parties by the Court of Arbitration for Sport on the 13th. It was during this 6-hour hearing that the New York Times told us that the Russian clan released a video of grandpa Valieva. Video in which he will explain, medicine box in hand, that he was the one who was treated with trimetazindine and that his little girl inadvertently drank from his cup. Please don’t laugh…

The same day, the American daily revealed that the Stockholm laboratory, which analyzed the skater’s sample, also found traces of two other heart medications, hypoxene and L-carnitine. If the last two substances do not appear on the list of products prohibited by WADA, Travis Tygart, the director general of the American Anti-Doping Agency (USADA) heard that day, explains that this “trifecta of substances” seems to be “targeting increase endurance, reduce fatigue and promote greater efficiency in the use of oxygen. »

Valieva skips the conference after her short program

Twenty-four hours later, the CAS finally decided to lift the athlete’s suspension, arguing that “preventing him from competing at the Olympics would cause him irreparable harm”. So here she is on the ice the next day, leading a less impressive short program than usual (82.16 pts), but more than enough to take the lead ahead of her compatriot Anna Shcherbakova (80.20 pts) and the Japanese Kaori Sakamoto (79.84 pts). We were not present in Beijing that evening but, according to our colleague from L’Equipe on site, the atmosphere in the bowels of the Beijing rink was lunar.

After passing without a word in the mixed zone, Valieva also quizzed her passage in a press conference, contrary to the rules which require the first three in the classification to present themselves to the press. “These days have been very difficult for me (…) I am happy, but at the same time I am already emotionally tired”, she simply confided to Russian television a few minutes earlier. These falls and this fourth place, Wednesday evening, will have at least spared him a passage in front of the microphones. And to the IOC to have to perform a mock podium, without an official medal ceremony. Not sure, however, that this is enough to make people forget this great extra-sporting circus.

Tremor in Mexico: earthquake with epicenter in Cintalapa, Chiapas