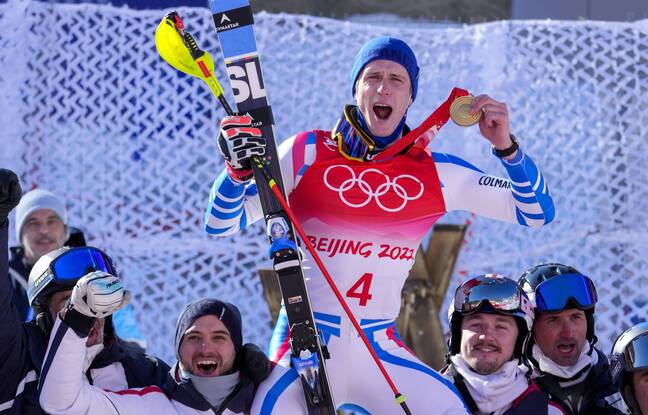 From our special envoy to China,

Little quiz, at home at home: What were the first words of the brand new Olympic slalom champion, Clément Noël, crowned Wednesday under the Yanqing sun after a second run in the form of a slap in the face of the other competitors?

A. It’s crazy, I still don’t realize, I had dreamed of this one so much!

C. What do we shovel them in this country, it was time for her to arrive so that we could finally return to the country.

Come on, as you are beginning to know our baseness a little, you will have guessed that it was answer B. Yes, gold medal around his neck, the new king of slalom had a pressing desire. It must be said that the poor did not stop a single minute after his recital. Between his passage on the podium – moving although a little sad as the bleachers were empty on Wednesday –, the collective photo with his friends, the countless passages in front of the TVs and radios in the mixed zone and the compulsory press conference, Clément Noël n didn’t have a moment for him. We therefore thank him for having taken the time to talk to us again, in the heat this time, in a kind of mixed zone improvised in a hurry in the press room, before spinning off to do his business.

Clément Noël only had eyes for her in the hastily improvised mixed zone in the Yanqing press room. You are a champ, champ! 🥇 pic.twitter.com/3iFRWkwJMa

Dispelling doubts before the medal

Note that answer A. could have done just as well, because that’s what the Frenchman started with once the microphones were on. He does not realize, therefore. So, to convince himself that he is indeed the boss of the zigzag, he looks at her again and again. “She’s beautiful,” he says, admiringly. It is impressive, it is heavy. It’s nice because in a discipline like ours, it’s hard to be present on D-Day. And since there’s only one race every four years… The last few days I thought about it a lot in seeing the other French people win medals makes you want to. »

Especially since it comes from afar. Because, if there was no photo on D-Day, the fourth in the slalom in Pyeongchang in 2018 comes a long way, after a month of January dressed in doubts and rickety results. Frédéric Perrin, the head of the technical group of the Blues, was not leading off when he arrived: “Yeah, I was afraid that he would doubt a little, I’m not going to lie to you. In the approach, I tried to take all his doubts away from him by being super detached, super quiet, cool, because there was no reason to doubt. Afterwards, when you chain everything he chained in January, it’s not easy. However, as the boy is the type to quickly tie knots in the brain, inevitably it was a lot of thought.

“It’s true that when things aren’t going so well, I tend to ask myself a lot of questions and not ask the coaches too much for help,” he confides. It is not for nothing that, when asked for a word to describe his foal, Loïc Brun, the coach of the technical group of the French team, did not hesitate for a second:

“Clement? A bubbling who hides his game. “But the coaches were tops, engages the Olympic champion. They knew how to find the words to put me back in the right direction. They know me, we’ve been together for quite a few years, they know how I work. Afterwards, it’s not just the words that count, you also have to ski well in training, you have to be confident inside, and that’s a feeling that no one can manage. »

On this point, the first sensations on the Chinese snow quickly removed the last questions. Perrin, always: “When I saw him skiing again the first few days here, I found him very mobile, very easy, very “fun” with the snow. That’s what he loves and he shouldn’t forget that. When he is like that, he excels in this kind of feelings. Feelings of magic with the snow, it becomes one with the elements. It’s great. »

“The best slalomer in the world”, according to his coaches

To find this simplicity on skis, as we have said, Courchevel skiers necessarily need to feel good up there. You will tell us that it is somewhat the same for everyone. Certainly, but with him it is perhaps even more significant. Thus, after Schladming, the Vosgien took a break. “I took myself a week at home where I was able to cut, no skiing, just a little physical preparation, he explains. And rest, above all. It did me a lot of good, I think that before the Games you have to clear your head. “In slalom, confidence plays a huge role in the result. He lacked it, he said it, and this cut did him good, ”validates Brun.

It is therefore inflated to block that Clément Noël approached the day of Wednesday. And without (too much) pressure. He says: “It was fine, frankly. Afterwards, these are never pleasant days to spend, it remains a moment when we are waiting, we are under tension. So we try to get a little bit between the two rounds. And then I’ve always had people around me to chat, I don’t like being alone, if I find myself alone I think too much. I managed the day rather well, not too tense at the start, just enough to be 100% focused on what I had to do. »

And what he had to do, according to Loïc Brun, was “do Clément Noël: don’t let go and send the weld. To the delight of Frédéric Perrin, who kept staring at the Yanqing track, while talking to us, as if to recall the Frenchman’s fiery race live. “I love this discipline when there is speed, when it bombs, when there is magic on the snow and that’s what I saw on his second run, he rejoices. I enjoyed watching him ski. I saw him skiing at a very high level. In fact we saw Clément Noël, what! The best slalomer in the world. »