What will become of oysters in a warmer, more acidic ocean? 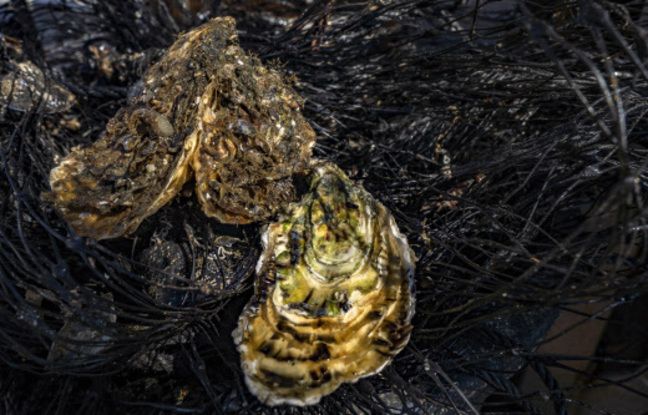 Will oysters have shells hard enough to withstand unprecedented variations in their environment in the coming decades? We know, according to the most realistic predictions of the IPCC (Intergovernmental Panel on Climate Change) that the temperature of the ocean could rise by three degrees by 2100 and that by dissolving in In the water, the CO2 present in the atmosphere forms carbonic acid which contributes to acidifying the oceans. Launched 18 months ago,
the CocoriCO2 projectled by Ifremer and the CNRS, is interested in the impact of this climate change on the oyster farming sector and on the possibilities for it to adapt to it.

Fabrice Pernet, biologist specializing in the cupped oyster and coordinator of the study for Ifremer, recalls that this is a species which is a “good indicator of the climate changes in progress and of the effects they will have on marine organisms. This shellfish is not only the main aquaculture resource in France but also one of the most cultivated species in the marine world.

Its shell in danger

The acidification of the ocean leads to a drop in the observed carbonate content, but this is what constitutes the shells of oysters. The molluscs will therefore find themselves lacking the raw material to build them. “All calcifying organisms are threatened by this acidification (corals, phytoplanktons, etc.) known since 2003″, specifies Fabrice Pernet. According to the IPCC scenarios, the PH could oscillate between 8.1 and 7.8 in 2100 or in coastal areas, natural fluctuations of 7.6 to 8.2 are already observed and the PH could drop there to 7.3 ” where we know that there is no possible larval life”, warns the specialist.

Although research projects on this topic have existed for fifteen years, we do not know how the PH will evolve in farming areas because its variations can be very significant, particularly in the coastal environment. There is an observation network at six shellfish sites in France, which is a world first, says the biologist, but the long-term effects are not known. “We submit today’s organisms to tomorrow’s conditions, for a few weeks or months, and we measure their ability not to adapt but to acclimatize,” believes Fabrice Pernet. Perhaps they will adapt over the generations or, on the contrary, pay a high price and wither away. It takes experience over at least three generations. The latter has just begun and will continue for three years.

In this research project, the shellfish will be put to the test, unlike farming areas in which they are pampered, sheltered from predators and always provided with sufficient food. In addition to exposing them to heated and acidified seawater, it will be a question of respecting the “natural parameters”, specifies the researcher to better assess their vulnerability.

Impossible to cool the oceans but on the other hand, there are ways to fight locally against acidification. “By combining oysters with seaweed, because they photosynthesize, capture CO2 and raise the pH, this offers a temporary refuge against acidity”, points out Fabrice Pernet.

Several types of algae have been tested (green, brown, and red algae) and green algae would make oysters more susceptible to the flu virus, which they catch every year. Laminaria, a kind of brown algae, would be promising because they have a high photosynthesis activity, and a co-culture with shellfish will be tested.

Another way to straighten the PH is to put the empty shells reduced to powder (sodium bicarbonate) back into certain natural environments, such as semi-closed lagoons. Clearly, instead of throwing the shells in the trash where they will not end up being incinerated, it is a question of using them to locally realkalinize the environment. If the predicted variations are confirmed, the capture of young oysters in the natural environment could become rare in favor of hatcheries, where it is easier to adjust the pH.

The oyster is a robust organism accustomed to low pH because it initially lives in estuaries, but the intensity and frequency of the announced changes are still very worrying for its survival. On the Bassin d’Arcachon for example, it is already subject to drops in pH but very sporadic “It closes and waits, to resume its life afterwards. But it will happen more often and more and more severely and it will no longer be a PH of 7.6 but 7.3,” warns the biologist.

The cocoriCO2 project continues until July 2023, when the first conclusions will be proposed, but it will take several years to obtain consolidated results.