Olympic Games 2022: the men’s biathlon relay wants to shine, Tess Ledeux in search of gold, the two-man bobsleigh must write its history… At what time and on which channels to watch Tuesday’s events?

Will Quentin Fillon Maillet continue his 100%? Nothing is less certain in a discipline like biathlon. But, in relay with his companions, they are among the favorites and should play at the forefront for a new medal, Tuesday, February 15. In addition to the biathlon, the French downhill riders Romane Miradoli and Laura Gauché are expected on the Yanqing track.

Antoine Adelisse was due to contest the final in freestyle skiing slopestyle after the disappointment in big air, but the Frenchman had to forfeit after a fall in training. He suffers from a sprained right knee, with damage to the anterior cruciate ligament. Four French people will compete in the Nordic combined event on a large hill. In two-man bobsleigh, Romain Heinrich and Dorian Hauterville can aim for a good place in Beijing. Discover the full program of the day:

After having qualified without the manner in 9th position, Tess Ledeux will set off on the slopestyle of Genting full of ambition. Revanchist after her silver medal in the big air, La Plagnarde will once again have to be wary of the Chinese Eileen Gu, who had stolen the gold from her in the first event, but especially the Estonian Kelly Sildaru, a great specialist in slopestyle.

After a lackluster super-G for the French, Romane Miradoli and Laura Gauché will be aligned with ambition on the Yanqing descent. Rather at ease on this track, Miradoli could well create a surprise against top names like Sofia Goggia or Corinne Suter. Two other Tricolores will also race down the track: Tiffany Gauthier and Camille Cerutti.

It is one of the most anticipated races of this fortnight for French biathlon. The tricolor relay is one of the best with a composition at the height, at least, of that of the Norwegians. With Fabien Claude, Emilien Jacquelin, Simon Desthieux and Quentin Fillon Maillet, France will dream of gold after the poor 5th place in Pyeongchang four years ago.

Four French people will compete in this Nordic combined event on a large hill. Leader Laurent Mühlethaler will obviously be there with a knife between his teeth after the disappointment on a small hill. The young Mattéo Baud, youngest of the tricolor delegation and best Frenchman on the first event, will still be keen to shine. Antoine Gérard and Gaël Blondeau will be the other two Blues lined up.

With the four Frenchmen to follow, perhaps placed after the large hill jumping event.

After the experience of four in 2018, Dorian Hauterville and Romain Heinrich arrive at two not without ambition. In the top ten at the last world championships just a few tenths from winning, the French bobsledder duo can surprise everyone.

On this new day of the 2022 Winter Olympics, you can also follow or discover other sports such as Nordic combined, figure skating or even bobsleigh… From Friday February 4 to Sunday February 20, 2022, discover the daily program of the Beijing Winter Olympics on franceinfo: sport. 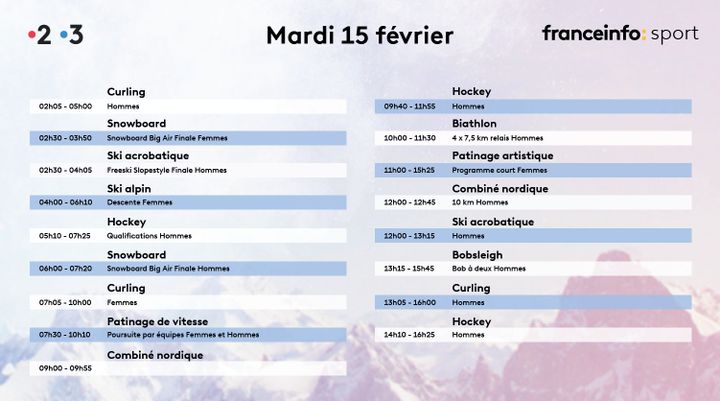 The program for Tuesday, February 15, 2022 at the Beijing Olympics. (FRANCEINFO)