Indoor mask at school: “It is desirable” that it be removed “as soon as possible”, probably “in the spring”, hopes Jean-Michel Blanquer 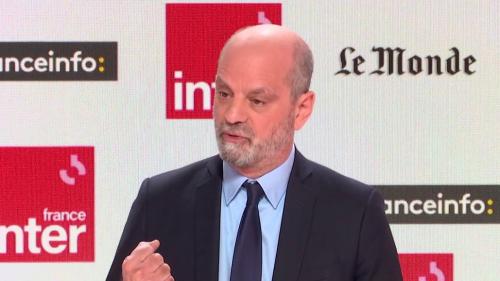 “I am very happy to be able to have this new relief and I hope that we will gradually take steps”, indicated Jean-Michel Blanquer, the Minister of Education, invited Sunday February 13 in Political Questions on France Inter, franceinfo and Le Monde, concerning the passage of the health protocol from level 3 to level 2 in schools. The minister made no secret of his desire to go further “in several weeks”.

The mask should “most likely” no longer be mandatory for students in class by the “end of the school year”, says @jmblanquer#PolQuestions pic.twitter.com/jPzrcfpqaA

While children no longer have to wear the mask outside, “which is a very big change”, Jean-Michel Blanquer considered that it is “eminently desirable that the mask can be removed from children”, indoors, “as soon as possible”. “And that’s what will happen,” he promised. Asked about the possibility of this happening “in the spring”, the minister replied “yes, in the spring, it is the right formula” after having already indicated that “this is probably what will happen before the end of the year school”. “It is my dearest wish” he assured while specifying that “for that it will be necessary to have crossed several levels of the health situation”.

For the time being, “we have the feeling that the 5th wave has its peak behind us and that the current descent in health figures allows us to have relative optimism”, specified Jean-Michel Blanquer. According to him, “it’s a favorable situation” for relief.

On the question of tests for students, whose protocol has been lightened from 3 tests to 1 test on D 2 for contact cases, Jean-Michel Blanquer acknowledged that this had represented “a lot of constraints for everyone” and that “it was a cause of exhaustion for the principals and principals of schools, for the teachers and the parents”. “We had said from December 15 that January would be terrible, we knew it, and we had said it”, continued the Minister of Education, congratulating himself on having “crossed the month of January” where “close the schools would have been the easy way out”.

“One of the challenges was to provide replacements [d’enseignants absents à cause du Covid-19], have we ensured it perfectly? No, of course, we had a lot of imperfections”, he also admitted. “But you cannot, in times of extraordinary crisis, have public service operating requirements, exactly as if we were in normal times”, justified Jean-Michel Blanquer.