UdeG: Museum of Environmental Sciences goes despite the decision of the SCJN, says Villanueva

At the opening of the exhibition “Raíces de lo vivo y el futuro”, the rector general of the University of Guadalajara (UdeG), Ricardo Villanueva Lomelí, stated that the Museum of Environmental Sciences will be completed, despite the fact that the Government of Jalisco celebrated the rejection of the Supreme Court of Justice of the Nation (SCJN) to the constitutional controversy over the 140 million pesos (MDP) readjusted from the state budget.

“I see the State Government celebrating that the Court did not accept the constitutional controversy. I wonder, what are they celebrating, that the most important museum in Mexico is not going to be built? From here we tell them: In Jalisco the Museum of Environmental Sciences (MCA) is going to happen with them, without them and despite them”, said the rector.

In addition, Villanueva Lomelí pointed out that the Supreme Court rejected the controversy because the UdeG is constituted as a Decentralized Public Organization (OPD) and not as an Autonomous Constitutional Body (OCA), although he confirmed that this Study House is not subordinate to any of the three constitutional powers and enjoys autonomy. 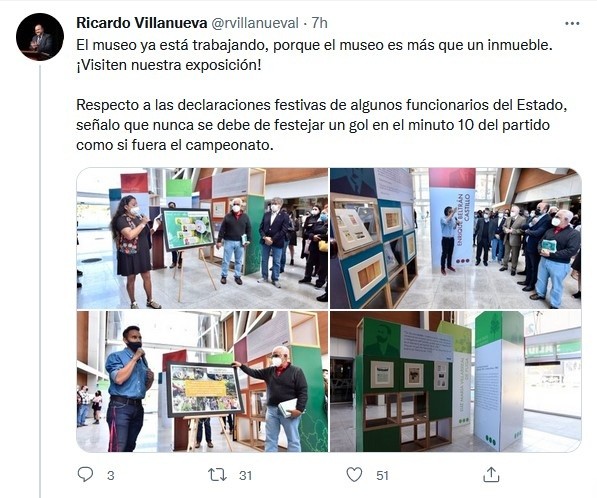 For Villanueva Lomelí, the substance of the matter is still in the SCJN, since the State Executive violated the Expenditure Law by indicating to Congress changes in the approved 2021 budget, which contravenes the separation of powers.

If the matter is not resolved in court, they will resort to the Superior Audit Office of the Federation (ASF) to set up criminal proceedings for alleged diversion of resources if the government uses the funds earmarked for the MCA in something other than what was approved.

Villanueva Lomelí said that the MCA has been working for several years in nearby communities with the painting of murals and exhibitions to put together a strategy to spread awareness around the environment, one of the most important agendas of humanity.

“Raíces de lo vivo y el futuro” is presented as a background to the objectives of creating the MCA to contribute to the educational, cultural and social development of the Metropolitan Area of ​​Guadalajara (AMG) and Jalisco.