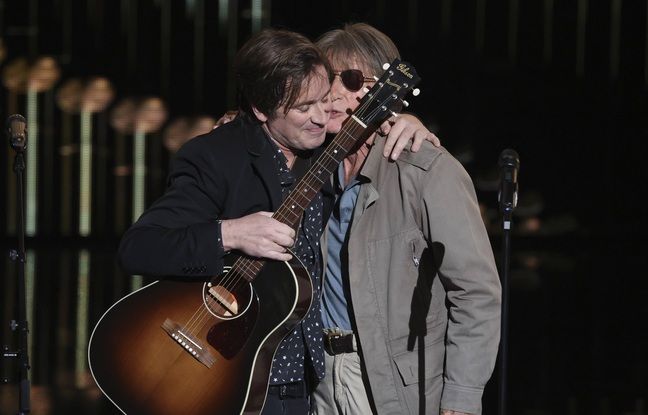 Jacques Dutronc was honored at the 37th Victoires de la Musique ceremony. “Monsieur Jacques”, as his son Thomas called him, was applauded for a long time at the start of the evening on France 2. “I cannot say ‘my father, this hero’, he is not a firefighter. But I can say “my father, this number”, launched the 48-year-old singer after a retrospective of his father’s career in pictures.

Sitting in the front row of the room, Jacques Dutronc listened to the few anecdotes delivered by his son, and especially listened to the beautiful statement he made to him. “I’m proud of you, proud to be your son and so happy to be touring with you soon. I know we’re going to enjoy it because your music rocks and people love you very, very much, and mom and I love you even more, ”said Thomas Dutronc, visibly moved.

A few seconds later, Jacques Dutronc went on stage to perform Et moi et moi et moi, a hit released in 1966. “See you soon on the stages of France”, launched the artist at the end of his performance, referring in their series of concerts entitled Dutronc & Dutronc, so the kick-off will be given in April. The last time he participated in a tour, it was alongside Johnny Hallyday and Eddy Mitchell as part of the Vieilles Canailles show.

Although he left with his Victory of Honor, Jacques Dutronc did not take the time to send a message of thanks to the public. And yet, it’s not for lack of trying, Laury Thilleman would certainly say. The host tried to catch up with the singer to no avail as he headed backstage. ” Thank you both. Jack? If you can hear me? I’m not sure… I don’t think he can hear me… But his thanks were done in song,” she exclaimed with a laugh. AIE Aie Aie ! Ouch! AIE Aie Aie !