Program for the 2022 Olympics: Papadakis and Cizeron on the ice, men’s sprint in biathlon… At what time and on which channels to watch Saturday’s events?

The Games continue on Saturday February 12. Like every day, curling will open the ball at 2:05 a.m. with three group matches of the women’s tournament to follow on France 2 and france.tv. The first event for the tricolor clan will take place at 3 a.m. with the first rounds of snowboard cross by mixed teams.

The two great French moments of the day will take place at 10 a.m. with the men’s biathlon sprint and at noon for the ice dance with Gabriella Papadakis and Guillaume Cizeron, favorites of the competition. Ice hockey, speed skating and ski jumping will be followed on the antennas of France Télévisions.

3h00: snowboard cross by mixed teams to follow on France 2

It’s a brand new event that the French could see themselves winning. In this format with sixteen teams starting in the quarter-finals, the male athlete starts first. The gaps at the finish are transferred to the women who then leave and the first to cross the line wins. With Chloé Trespeuch, Olympic vice-champion Wednesday as finisher, France has a formidable asset. She will be partnered with Merlin Surget, fifth in snowboard cross on Thursday. Another French duo composed of Julia Pereira de Sousa-Mabileau (silver medalist in Pyeongchang) and Loan Bozzolo will also be at the start.

5:10 am: quarter-final between Russia and Switzerland in women’s ice hockey to follow on France 2 then France 3

Bis repetita, as in 2018 in Pyeonghchang, Swiss and Russian find themselves in the quarter-finals of the women’s ice hockey competition. The two teams have only won one match in the tournament and have already faced each other in the group stage. Russia had won 5-2, a river scoreline reminiscent of the 6-1 quarter-final four years ago. The Helvetians will therefore try to take their revenge.

8:30 am: women’s 4×5 kilometer relay in cross-country skiing to follow on France 3

The French are far from being among the favourites. But with sprinter Léna Quintin to start, leader Delphine Claudel to continue in classic before giving way to Flora Dolci in skating style and Mélissa Gal to finish the job, Thibaut Chêne’s protégés can hope for a good result. The favorites remain Norwegian, Finnish and Russian. The latter, winners of the only relay of the season, will leave with a psychological advantage, but the titles of Therese Johaug (Norway) in the classic 10 kilometers and in the skiathlon give hope to the Scandinavians.

After the title on the individual (20 km) of Quentin Fillon Maillet, the French biathletes are back in business. The new Olympic champion will be accompanied by Simon Desthieux, Fabien Claude and Emilien Jacquelin. The latter, in full doubt, will be keen to succeed in this race. The Grenoblois has been on the podium twice this season in the sprint and is in third place in the specialty classification. Quentin Fillon Maillet will try for his part to stay on his cloud and slide towards a second consecutive Olympic title.

Quadruple world champions and five-time European champions, the couple Gabriella Papadakis-Guillaume Cizeron hit the track on Saturday. His goal is simple: to do better than in Pyeongchang where he won the silver medal. In South Korea, it was on this rhythmic dance event that the French had lost the competition following a costume problem.

On this eighth day of the 2022 Winter Olympics, you can also follow or discover other sports such as speed skating, ski jumping or skeleton… From Friday February 4 to Sunday February 20, 2022, discover the daily program of the Beijing Winter Olympics on franceinfo: sport. 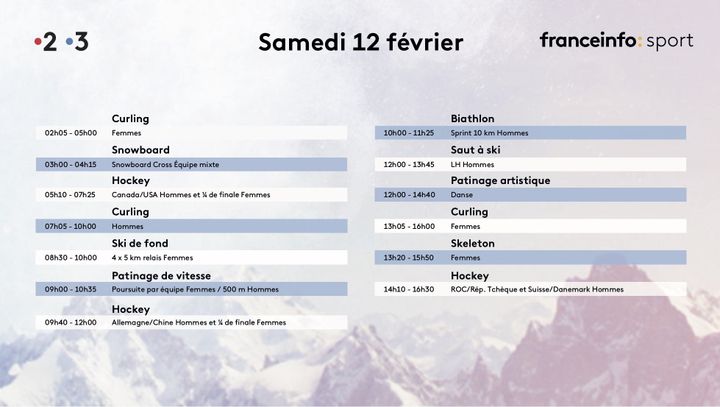