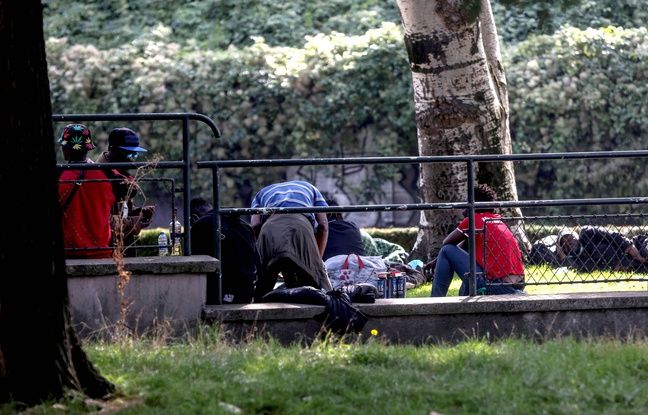 The town halls of Paris, Pantin and Aubervilliers, as well as the department of Seine-Saint-Denis, announce that they have seized the administrative court on Wednesday to oblige the State to provide medico-social care for crack users who have been living in a square since September. Porte de la Villette. The request for interim relief “useful measures”, which the four communities say they have filed before the administrative court, aims to enjoin the State to take “emergency measures in order to resolve the very worrying situation which we have been witnessing for months de La Villette”, declared Nicolas Nordman, the deputy (PS) for security at the Paris City Hall, during the city council.

The State must, “on a provisional and protective basis”, offer “emergency accommodation allowing medical and social care for drug addicts living in the 18th, 19th and 20th arrondissements of Paris and on the edge of the Seine-Saint -Denis, or, at the very least, any useful measure making it possible to preserve the health, the dignity of the people concerned as well as their safety and that of the residents, ”estimate the communities in a joint press release.

Since September and the movement of these 150 to 200 drug addicts to relieve the Jardins d’Eole (18th century), the previous meeting point, “the inertia of the state public authorities is obvious when they are competent both in health […] than in terms of emergency accommodation or public order”, still believe the communities. On February 1, the State services announced the financing of 70 additional accommodation places for these drug addicts, corresponding to the number of drug addicts sleeping permanently on site, and bringing to 510 the total number of places financed by the crack plan. .

At the end of January, the prefect of police Didier Lallement announced that he wanted to move this same group of drug addicts from north-east Paris, their historic district, to a railway wasteland in Bercy (south-east). He had given up three days later in the face of the “virulent opposition” of the Paris City Hall, joined by the right-wing elected officials of Val-de-Marne.

Present at the Council of Paris for current issues, Didier Lallement castigated the legal action taken by the City of Paris. “You cannot at the same time call for common solutions and at the same time explain that there is a debate in the courts. I don’t understand anything anymore and I’m sorry about that,” he said. “The thing is very simple to understand, we are questioning the non-action of the State”, replied Anne Hidalgo (PS), sitting right next to her.

Our file on crack

The tense exchange had begun when Anne Hidalgo questioned the action of the Minister of the Interior Gérald Darmanin (LREM) in this file: “The Prime Minister has arbitrated a position which consists in saying: “we need a global approach “, and then we have a problem since this solution is not supported by the Minister of the Interior. “We do not have the support of the police force necessary to maintain places in which we can both secure local residents and support drug addicts,” added the socialist candidate in the presidential election.