No, this video does not show “the humiliation of a Malian in France” 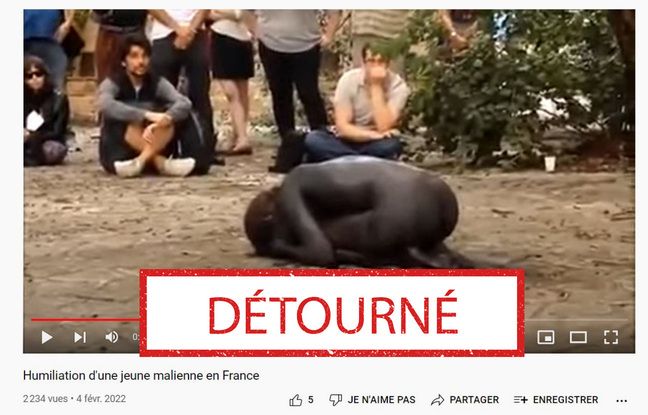 These are shocking images circulating on WhatsApp. A video, wrongly titled “humiliation of a young Malian in a city in France”,
show two white men and a white woman urinate on a naked black woman curled up on the ground as impassive onlookers watch.

A reader alerted us to these images, which can also be found on other social networks.

By performing a reverse image search, we find the source of this video: it is not about the humiliation of a Malian woman in France, butof an artist’s staging. The woman being urinated on is Guatemalan artist Regina José Galindo. His performance, called “Piedra” (“stone” in French),
took place on January 17, 2013 at the University of Sao Paulo, Brazil, as part of the meetings of the Hemispheric Institute, a center that brings together “artists, scholars, writers, learners and activists from all over the Americas” . Their mission is to “focus on social justice and [et faire] research on politically engaged culture and performance”.

South American artist Explain having covered his body with charcoal to – symbolically – become a stone and carry within it “the history of the world”. Turned to stone, the artist describes in a poem “not feeling the blows/the humiliation/the lustful looks/the bodies above mine/the hatred”.

An artist who stages her body

Regina José Galindo regularly uses her body in her performances. She explains from the context of Guatemalan society, torn apart by a civil war for more than thirty years, to “explore and accuse the ethical implication of social violence and injustices linked to gender and racial discrimination, as well as violations of human rights resulting from endemic inequalities in the power relations of contemporary societies”.

The diversion of this staging arises on social networks at a time of renewed tension between France and Mali. Mali’s ruling military junta expelled the French ambassador on January 31. French troops have been present in the country since 2013, but could reduce their presence there.