Mount Abantos stands out proudly over countless jet-black roofs. Chalets crowned with slate that this same territory has provided since time immemorial. An urbanization that rushes downhill until it reaches the urban center of San Lorenzo de El Escorial (Madrid, 18,400 inhabitants) and which lacks nothing. Centennial pines, a profusion of hedges, luxurious swimming pools and steep slopes frequented by fans of skateboarding. Although a disturbing presence takes shape a few meters from the houses. This is the El Romeral reservoir, cataloged with the highest category for potential risk due to its proximity to people. It was born to supply the monastery and was later adapted to its current function: collect avenues for the fire-fighting system. In its conditioning tasks, National Heritage has emptied the dam from the 1920s and uses a disused barrier built by Juan de Villanueva in the 18th century.

The infrastructure of 15 meters high and large ashlars has proven to more than fulfill its function. It is being tested by Luis Pérez de Prada, head of the National Heritage Department of Architecture and Gardens. “It’s surprising, but it doesn’t leak, it works perfectly,” he says in a dry bed where three dams from different times overlap. The first of these dates from 1563, when the architect Juan de Herrera took on the historical task of turning Philip II’s wishes into stone, and its masonry was reduced to rubble after some type of structural damage. Due to this problem, a new wall was built upstream around 1768, which is attributed to Villanueva, master master of Carlos IV. The man who would later build both the Prado Museum and the Astronomical Observatory was distinguished in that year as an architect of the Hieronymite order and it was in El Escorial where he amassed his first commissions. 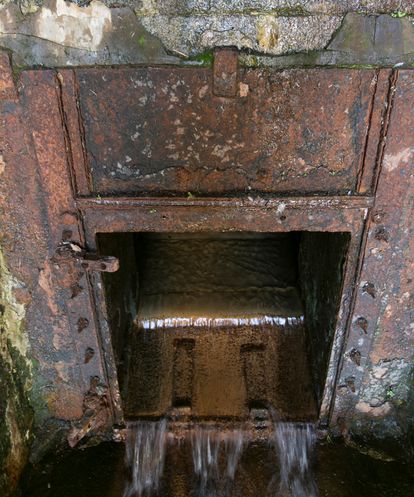 The third retaining wall is more recent and the only one operative under normal conditions. Its creation in the twenties of the last century increased the storage capacity by 90%, up to 250,000 cubic meters of water. The good state of conservation in which the Villanueva wall is found has allowed the water collected during the work to adapt it to regulations to be diverted there. They will cost a million and a half euros and will last a year. They began with the cleaning of the bed, teeming with underwater life. It is now the turn of two outlets and as many other outlets, important in the case of gravity dams. These base their resistance on the heavy friction with the ground on which they rest. If water leaks were generated between the surface and the structure, these could give rise to an upward force that would damage the whole. Risks of playing with physics.

Therein lies the importance of drains —”as happens with any wound,” says Pérez de Prada— and of cement injections that fill voids in the foundation. The intervention has also been used to restore the Villanueva dam, a canvas with three gates that resembles the defensive walls of the Remamiento with granite ashlars. An impost divides the whole in two where the upper part is set back. The voussoirs of the main arch could well reach a meter and a half in length. The entrance seems intimidated by the colossalism of an infrastructure in which other constructions were used. “It is possible that much of this ashlar masonry comes from the Herrerian era dam. Recycling was already practiced then”, jokes the National Heritage architect, shortly before touring the interior gallery. 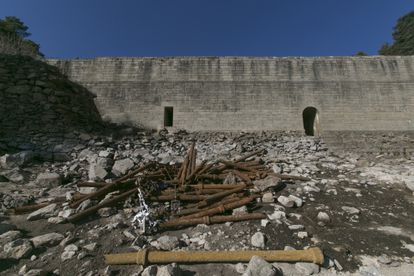 Access to the interior gallery of the El Romeral dam, designed by Juan de Villanueva commissioned by Carlos IV.Santi Burgos

This was drawn for reasons of technical observance, but it seems designed for the enjoyment of the public, the one that cannot now visit its nooks and crannies. When the 1920s dam works, the wall at its tail is difficult to access. This is the reason why this work by Villanueva, which left no known documentary trace in the Palacio General Archive, remains off the tourist route. “Be careful, floors are very slippery,” warns Pérez de Prada when he descends to the arcana of civil architecture. The noise of the water surrounds some corridors that cross the wall longitudinally. At the meeting point with the transverse axis, vaults governed by one-piece keystones in the shape of a cross open up. The corners were also lowered in order to save blows, just as the turning positions were marked with slight niches.

Only for technical staff

Details that for two centuries have only been enjoyed by the technical staff who accessed the interior from time to time. Now not even that. The gates of this dam always remain open, while the other, whom it looks at face to face, fulfills its mission. Villanueva’s wall still stands only because it provides occasional service. It was at the beginning of this century that the working dam was emptied for the last time for overhaul. Then, it was also necessary to use the work of the most universal Spanish neoclassical, co-author of the Plaza Mayor in Madrid and responsible for the Royal Academy of History, a building for official use that was erected without a single wooden slat. Everything was granite and brick in what was to be the new Jerónimos library. There they would deposit printing presses and prayer books, after some works in the Royal Cabinet of Natural History that required amputating part of their church. 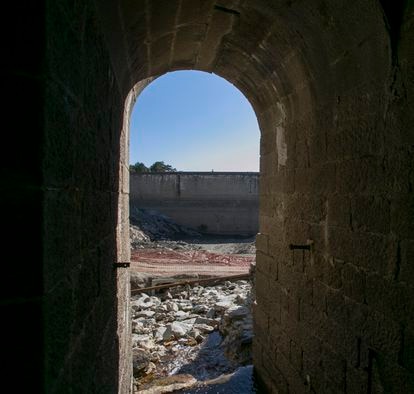 The accesses to the galleries designed by the architect Juan de Villanueva commissioned by King Carlos IV. Santiago Burgos

The San Lorenzo reservoir was the headwaters, the first point in an extensive map of canalizations, dams and fountains. The fineness of its finishes transcends hydraulic work and points to an architectural mind. That is why Pedro Moleón, author of The architecture of Juan de Villanueva. The Project Process (Akal) attributes this construction to Villanueva without documentation to support such assumption. “It could not have been someone else, neither because of the time, nor because of the style, but the files that confirm it are missing and for now they have not been found. It was typical to detail the conditions of the order, the weekly costs and the delivery time. One day all of this will be found”, argues the academic from San Fernando. It happened with another well-certified reservoir, although smaller, destined to irrigate the residence of Gabriel de Borbón, son of Carlos III. 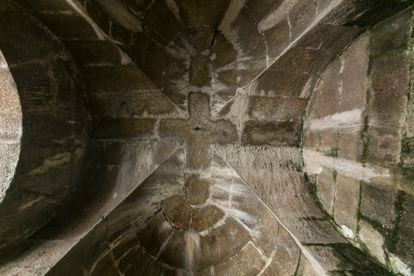 Detail of one of the vaults that were exposed this week after the removal of the water from the Romeral reservoir. Santiago Burgos

In La Ginebrosa (Teruel), however, Villanueva failed miserably. There he projected the greatest hydraulic initiative of the 18th century, only two years after intervening in the Herrerian architecture of El Escorial with a new staircase and standing out with the fish market in the same town. His action at the confluence of the Bergantes and Guadalope rivers was to launch an ambitious irrigation program for the town of Calanda. But the river course overflowed its banks in October 1788, destroying a decade of work that was still in progress. The Infante Antonio Pascual could not face the losses and abandoned his plan, claiming by legal means to this Teruel town the liquidation of his part. The vestiges of that company were submerged in a contemporary reservoir, although they emerge from time to time if the level is very low.

So that of El Romeral constitutes the largest reservoir that Villanueva managed to raise. The teacher found in El Escorial a certain school where he could try out the trades of architect, engineer and urban planner. Noble residences and royal palaces that only on the inside reveal their true grandeur. At the age of 28, he approached his debut film, the House of the Infantes and the Queen, which should not compete with a main facade of the monastery that is right in front. Only on its rear face does the designer allow himself greater licenses without fear of eclipsing what was the residence of Felipe II. She is visited on a hot Friday afternoon by two couples from Extremadura with their children. “We had never been here, but this whole atmosphere is overwhelming,” she says. And he adds: “It doesn’t bother me that the author also dedicated himself to making dams.”