The tension is palpable at the beginning of the afternoon in the entrance of a huge prefab construction site in La Défense. The general evacuation order has fallen. A lifting device caught fire at the entrance to the west tunnel in the huge construction site of the future RER E station. The 150 workers present must leave the site. “I’m sending the rescue basket,” spits the walkie-talkie of the main incident manager (CIP) of E-DEF, the group that manages the work. Quickly, the 18 is called and the emergency services are triggered.

Luckily, the Paris fire brigade is already there, or almost. Because of fire, there is no. It is indeed an exercise so that the firefighters train to intervene in these particular environments. The La Défense station construction site as part of the Eole (East-West Express Link) project to extend the RER E line is indeed atypical. It is located 50 m deep under the Cnit’s six underground car park floors, which does not make working conditions any easier.

Every month, the firefighters carry out an exercise on the construction site of this extension or that of the Grand Paris Express (GPE), which are similar. In 2021, they intervened 33 times on this work, including 7 times for fire reasons, even if it was generally only smoke release. This afternoon, the scenario is much more serious, but it is to better test the soldiers of the fire. Three principles guide the day’s session: anticipation, with the different actors, consistency, in the approach techniques, and follow-up, of the exercises. 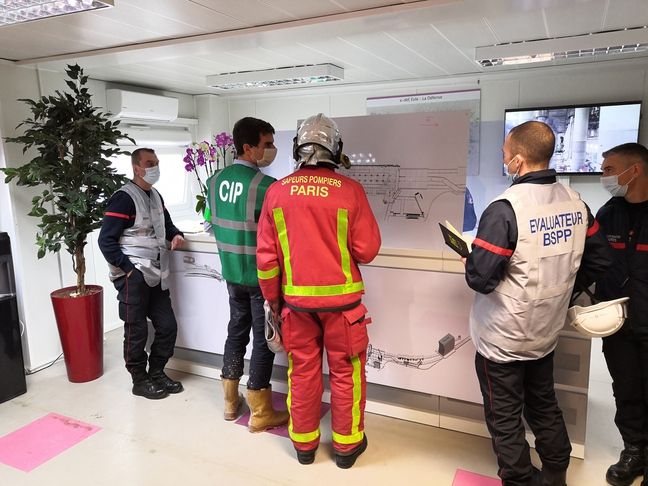 The manufacturer’s CIP indicates to the head of guard where the damage is located. – G. Novello

Shortly after the call to 18, the head of the BSPP guard arrives in the prefab and contacts the CIP. Questions abound, but always very precise: “Is it an electric or diesel vehicle that caught fire? Are there gas bottles? A fuel depot? Is the ventilation switched off? The CIP responds as best as possible by designating the scene of the accident on a plan of the site. He adds that one injured person is on site and that four others are missing.

Experts to the rescue

Faced with the seriousness of the fire, more resources were deployed with the arrival of the command post (CP). A captain of the BSPP then appears who takes over the COS (rescue operations command) from the hands of the head of guard after the latter has informed him of the situation. Given the configuration of the site, many BSPP specialists are mobilized. Those of communications are thus already on site to ensure the relay between the radios of the firefighters 50 meters underground and the PC. A Crac (compressed air reserve van) was also called to ensure that the firefighters have enough oxygen bottles to intervene. 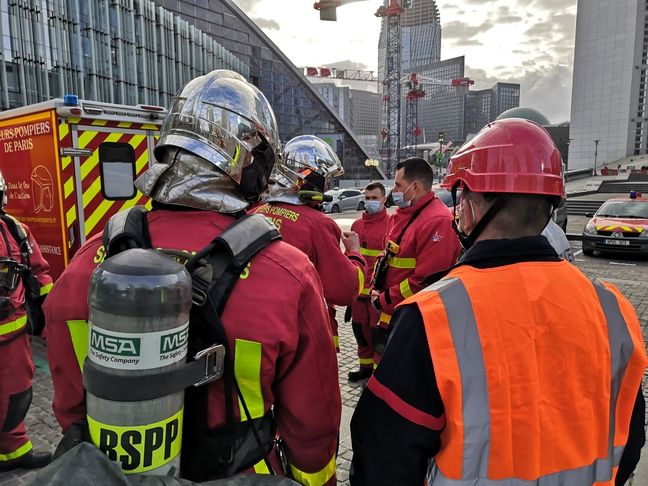 The chief guard briefs his men on the strategy adopted. – G. Novello

Place Carpeaux, near the Pouce de César, the chief of guard, relieved of the COS, gathers his men to go into contact with the fire. Equipped with lances, they go down to the construction site via the underground car park and then come out on a kind of balcony overlooking the station under construction, an impressive concrete cathedral, as Stéphane Bern would say, whose nave will serve as boarding platforms. Below, the first firefighters to arrive on site are trying to extinguish the disaster. One of them goes back up to report to the head guard. There is no pressure on the water network and everything is smoky, we cannot progress without respirators. The head of guard orders the withdrawal in order to reorganize the device and to return better equipped. 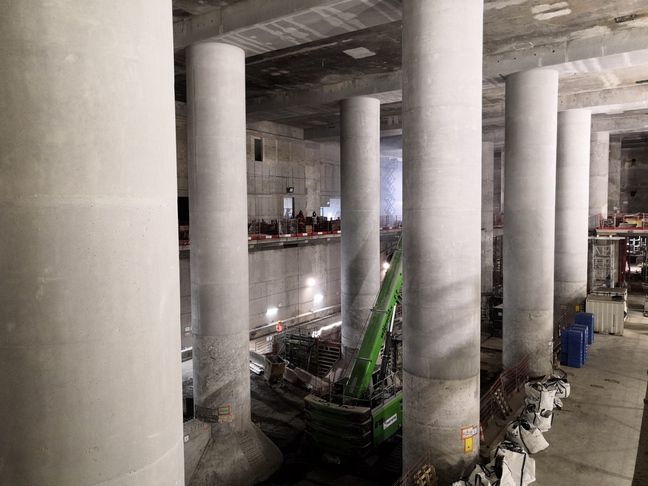 Admire this nave! It’s not Saint Peter’s in Rome, but not far. – G. Novello

The ELD attacks the fire from another front

At the other end of the West tunnel, at the level of the Triangle de La Défense, are deployed ELD specialist firefighters (long term exploration). Dressed in more resistant outfits and devices that recycle exhaled air for more autonomy in smoky areas, since 2018 they have also had the REX robot, the BSPP’s all-purpose droid. Piloted via a tablet and equipped with a mobile lance, it gradually sinks into the tunnel under construction. Thanks to its tracks and its power – “it can push a Twingo with the handbrake”, assures its driver – REX is almost unstoppable. He had also intervened during the fire of Notre-Dame de Paris. 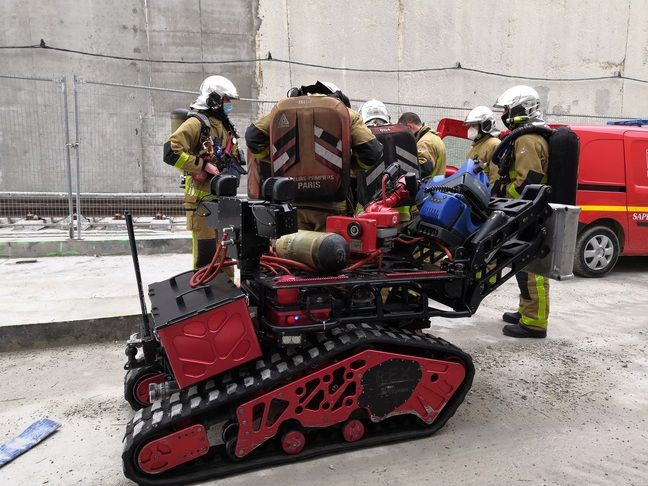 The firefighters of the ELD and their robot REX prepare to intervene. – G. Novello

After 500 meters of tunnel, the ELD firefighters arrive at the scene of the disaster, almost deserted by their colleagues. Indeed, a fire, a real one this time, broke out in a private basement, not far from the Cnit. End of the exercise and immediate redeployment on the new fire. Priority to reality!