Teachers in indigence: the bitter portrait of a union hit by the Venezuelan crisis 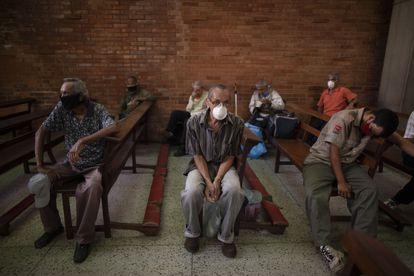 A group of people wait to receive free food at a church in Caracas in May 2020.Ariana Cubillos (AP)

While the firefighters tried to open the door of the apartment of the university professor Pedro Salinas, his moans could be heard in the background in a video that circulated on social networks. The dehydrated 83-year-old engineer was diagnosed with malnutrition and depression. He was next to the body of his wife, Ysbelia Hernández, 74, a bioanalyst and community lawyer from the Universidad de Los Andes, in Mérida, in western Venezuela. The woman’s body also had signs of malnutrition. He had died of a heart attack, according to the first statements of the rescuers.

The news of finding two university professors dead or about to die from malnutrition is plausible in the Venezuela of 2022. For this reason, despite the fact that some relatives of the couple denied from abroad that the elderly were in a situation of abandonment and assured that there were food in the pantry of his house, the case of Hernández and Salinas, who is recovering in a hospital, became the bitter portrait of an entire union that survives on starvation wages.

A university professor in Venezuela receives a salary of between 3 and 11 dollars a month, the lowest remuneration in Latin America. Those of higher rank, such as Salinas, who is an eminence in ecology, forest studies and planning of natural protected areas, trained at Imperial College London and director of peer-reviewed journals, the remuneration can reach $20 a month, a figure very far from the price of the food basket in Venezuela, which at the end of 2021 exceeded 400 dollars per month for a family. “They have reduced us to destitution,” acknowledges Mario Bonucci, rector of the Universidad de Los Andes, the university from which the couple retired. “We are dismayed.”

The University of Los Andes is one of the most important in the country and is the heart of the city of Mérida. Looking at their numbers gives an idea of ​​how the public university sector has been cornered. Bonucci processes one or two staff resignations from the university on a daily basis. In five years, he has seen the number of students halve. With the budget they received in 2021 from the State, each university unit had just $295 to function for a year. There is no cafeteria, no transportation, no student scholarships, and no medical coverage for teachers. There are areas of the campus closed due to the impossibility of maintaining them. Bonucci points out that they are about to measure again the desertion in the faculty plant, not only the numbers, but the type of qualified personnel they have lost, a common problem in all Venezuelan universities.

In a recent publication by the Academy of Physical, Mathematical and Natural Sciences, researcher Jaime Requena warns that there are more scientists who retire and leave the profession than those who enter it each year in Venezuela. He puts a number on the brain drain that Venezuela has experienced in recent years: more than two thousand researchers have left the country in two decades, the study refers. In the midst of the massive migration that has pushed more than 6 million Venezuelans to cross the borders fleeing the crisis, the classrooms have been emptied and the oldest ones have remained, the retired teachers, like the relief, one of the least visible signs of the humanitarian crisis that the oil-producing country is going through.

The Universities Observatory evaluated in 2021 the living conditions of the university population in Venezuela and found that 8 out of 10 teachers aged 60 or over suffer from chronic diseases and 9 out of 10 find it difficult to acquire medication. Within this group, 35% eat less than three times a day and another 35% do not receive any extra income on top of their salary from the Ministry of University Education. Likewise, 26% have not had a medical check-up or routine exam for more than three years and 21% have never managed to buy their medications.

At ULA, with the help of graduates, clothes and shoes have been collected for teachers and workers who don’t even have a way to dress. “When a salary is assigned like the one Venezuelan professors have, the State ignores the universities,” Bonucci points out. Since last year, the Blue Brigades organization has also regularly collected food and basic supplies for professors from the Central University of Venezuela, in Caracas, in a vulnerable situation. This same week, a request for help was sent to another teacher who required everything from medicines to soap for cleaning and food. Solidarity and campaigns to collect donations and international humanitarian aid that comes in trickles, are what sustains a large part of Venezuelans. When it comes to the fact that 96% of Venezuelans live in poverty and the 9.3 million people in moderate and severe food insecurity —data from Encovi and the World Food Program, respectively—, they also talk about these cases, professionals that have been impoverished by the voracious loss of value of the bolivar in Venezuela.

At least five million pensioners and almost two million public employees, including university students, belong to the group hardest hit by the crisis and escape the dollarization bubble that has allowed the recovery of some economic sectors last year. . A harsh adjustment has fallen on this population in the attempts of Nicolás Maduro to maneuver against the rise in prices. In the last two years, the Government has sacrificed fiscal spending and maintains a comprehensive minimum wage of 10 bolivars, which is barely two dollars a month, to contain the exchange rate and put a brake on the hyperinflation from which the country will finally come out. this 2022, without this meaning a total relief to the high cost of living in Venezuela. Although the Government assigns monthly bonuses, they are insufficient to raise their heads in the midst of poverty.