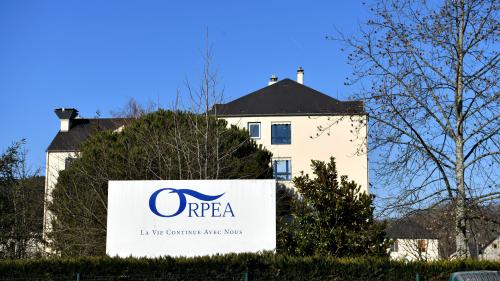 A former nurse’s aide, Aline* worked in an establishment of the Orpea group for several years in the Poitevine region (Vienne). The facts denounced in the book “Les Fossoyeurs”, published on January 26, she knows them well. At the time, she had tried to warn about the living and working conditions in her nursing home.

If Aline* agrees to give herself up, it’s because she would like her “testimony to be of some use”. For six years, she worked as a caregiver in an nursing home near Poitiers (Vienne), belonging to the Orpea group. .

In the wake of the publication of the book Les Fossoyeurs, the story of a three-year investigation by independent journalist Victor Castanet, Aline also wants to denounce the living and working conditions in the retirement home where she worked.

“My first morning of work there, I finished it crying,” recalls Aline. “I was being pressured to be faster. It was very violent.”

Above all, she remembers, you had to be quick to wash the residents. The former caregiver says that this one was unworthy. “If we managed to give them a shower a week, it was good!”, Denounces the former caregiver. “We were never given the time, nor the means, to concentrate on the shower, because we are convinced that these people are too old to have known the bathroom!”

We were never given the time, nor the means, to concentrate on the shower, because we are convinced that these people are too old to have known the bathroom!

Aline, former caregiver in an nursing home in the Poitevine region

Each morning, the nursing assistants have four hours to perform “between 15 and 17 toilets”, she specifies. “With some residents, it could go quickly. But others have senile dementia like Alzheimer’s, or sequelae following strokes… in short, everything that can be found in nursing homes. We should have taken the time with them! But it was impossible, so it was a bad job.”

Aline assures her, these conditions, she did not hide them from the families. “When we ran out of time or when there was a lack of staff for the toilet, I explained it to the families. They understood it, but they never accepted it.”

What particularly shocked Aline during her experience was the lack of urinary protection. “Sometimes in the morning the sheets were soiled. But during the night, we didn’t have enough protection!”. The same thing happened in times of gastro, the team of nursing assistants encountered enormous difficulties in providing protection with “sufficient absorption” for the residents.

For several months, with her team of caregivers, Aline fought to obtain more protection, she recalls. “We have organized ourselves to ask suppliers for a more suitable number. It lasted 5-6 months before we were stopped.”

Understaffed staff, Aline suffered. “We were dependent on the result of the grids of the Regional Health Agency. In my day, there were seven caregivers during the day for 80 residents. The worst were the nights. We did them in pairs: a nursing assistant and an ASH (hospital services agent). When you have to go around the 80 residents, it’s complicated.”

It had to be filled, it was important not to have less than 80 residents!”

Aline, former caregiver in an EHPAD in the Poitevine region

According to Aline, the establishment could accommodate 80 residents. However, some T2s, intended for a single person, sometimes accommodated two residents, one in the bedroom, the other in the living room. Aline remembers, the Ehpad received up to 88 residents for 80 places. “It was necessary to fill, it was especially not necessary to have less than 80 residents!”, She denounces.

These residents, insists the former caregiver, needed affection. Some want to be familiar with and called by their first name. “The management blamed us for it. We were told that we were not there to establish familiarity. But we spend all our time with them, even more than with our kids!”

Aline was fed up. She ended up siding with families who complained about the care of their loved ones. “I contacted the ARS to report the situation,” she says. “It earned me a one-day layoff. I was told about the duty of reserve. I don’t care, I don’t work for the public!” A few months later, Aline leaves her post. She now works in the medical field.

A choice she does not regret. “Sometimes I ended my day at the nursing home, I said to myself: “We did shit today.” A professional experience that will have traumatized her from the way our elders are treated.

Just because an elderly person lands in an Ehpad does not mean that they are nothing! Frankly, that freaks me out. I told my son never to put me in Ehpad

Aline, former caregiver in an nursing home in the Poitevine region

Faced with the scandal caused by the revelations of the Gravediggers’ book, Aline feels disillusioned, she who had already sounded the alarm, like other caregivers in recent years. “I don’t know how these establishments are going to be able to get out of this. We are fighting against a wall. Orpea is above all an armada of lawyers.”

*The first name has been changed at the request of the person concerned.