perfect strangers, the first original arabic film Produced by Netflix, it was a daring bet and it didn’t take long to prove it. Based on the successful 2016 Italian production of the same title, which was also made into a Spanish version by Álex de la Iglesia, the film portrays an intimate dinner between a group of friends that takes an unexpected turn when they all agree to share calls and messages that reach their mobile phones, which brings to the table sensitive issues in the region. The result, although applauded by many, has generated intense controversy, especially in Egypt, for addressing issues that, for some, undermine the traditional values ​​of society.

The film, presented in Dubai and released on the platform streaming on January 20, deals with issues such as extramarital relations and premarital sex, includes a homosexual character, shows the protagonists drinking alcohol and smoking, and contains a scene in which one of them removes her underwear, although there is no no nude. Due to content and details such as these, the film has created controversy: it is celebrated by some for offering a more representative image of society, but also harshly criticized by others who have wanted to see in it an attempt to promote or normalize infidelities or homosexuality.

“One of the main functions of art is to discuss how we live and how we deal with everything around us, and technology, of course, is one of these elements; so I think the film is very important, because it is putting us at the center of these issues,” says Egyptian film critic Rami Metwally. “A lot of people think that Netflix is ​​trying to change Egyptian society, customs and culture. It is a mistake, but people have been thinking like this for many years,” he adds. 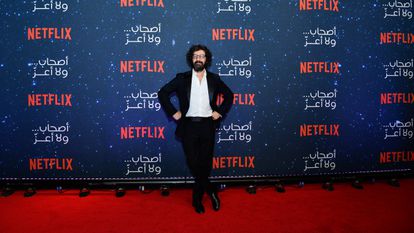 Wissam Smayra, director of the film ‘Perfect Strangers’, on January 17 in Dubai.Netflix

Among the latter are figures who have often self-appointed in Egypt as guardians of public morals in the face of events they perceive as a threat to strict social values. In this sense, the most popular locally produced films and series in the country are very conservative and heteronormative in the construction of their characters, particularly the female ones. At the end of last year, without going any further, the film Eternals, de Marvel, it was censored in Egyptian cinemas for its homosexual scenes. But the entrance of Netflix allows to overcome these restrictions. And judging by the figures, the bet seems like a success: perfect strangers tops the list of the most viewed titles on the platform in the country.

One of the most ardent critics of the film has been the journalist and deputy of the Egyptian Parliament Mostafa Bakry, who has come to file an urgent petition against the film for “addressing issues that violate the traditions of Egyptian society, the main one being the promotion of homosexuality and marital infidelity.” A lawyer, Ayman Mahfouz has claimed to have filed a lawsuit against Egyptian star Mona Zaki, one of the protagonists, and has indicated that he would send a warning to the Ministry of Culture to prevent the film from being screened in Egypt, something that the country’s censorship authority has already explained to local media that it cannot do. production too has aroused the ire of the Party of Light, an Egyptian Salafist formation. 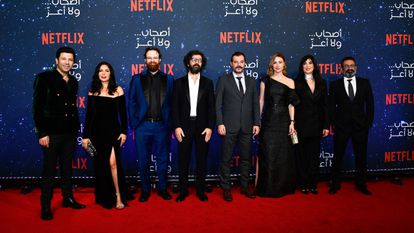 The director and the actors of the film ‘Perfect strangers’, at the premiere of the film on January 17 at the Bulgari hotel in Dubai.

On social networks, many users have joined these fierce criticisms against the film, which has been the subject of thousands of comments, echoing accusations of violating the values ​​of Egyptian society, of reflecting a certain moral decadence in the artistic field or of normalizing “the image of a broken society”. It is worth mentioning that some of the disapproved content, such as smoking, drinking alcohol and having extramarital affairs, are very common in male characters in Egyptian series.

On the other hand, the film and in particular Mona Zaki, who has been the main target of the insults, have received the support of a good part of their sector. The The Egyptian Actors Guild released a statement on Monday in which it reaffirms its commitment to defending artistic freedom in the country, shows his opposition to attempts to intimidate an Egyptian artist for his work and underlines the role of the arts in tackling thorny issues.

Colleagues of Zaki’s profession, such as the stars Amr Waked and Hend Sabry, have defended the actress in the networks and in interventions in the Egyptian media. “The madness that is happening with Mona Zaki must stop. Extremism and fanaticism are increasing in society as if we were a society without history,” criticized Waked, famous for his role in the American film Syriana, in a message on Twitter.

Other users on social networks have underlined the double standard of many of those who have launched to criticize the film and Zaki, and who then remain silent in the face of widespread crimes in the country such as child marriage, rape and sexual harassment. There has also been users who have reminded those who don’t like the movie that it is their right not to watch it. And commentators, like the Egyptian Eman Adel, who have attributed the “irrational agitation against the film” to a “widespread obsession with denial and the supposed assertion that any social problem can happen anywhere in the world, but not in this country.”.

Nicolas Bay indicted after a complaint by rapper Médine

Indonesia: a ferry runs aground on a submerged island with more than 800 people on board

Van Bronckhorst with Rangers started the final against Frankfurt | NOW