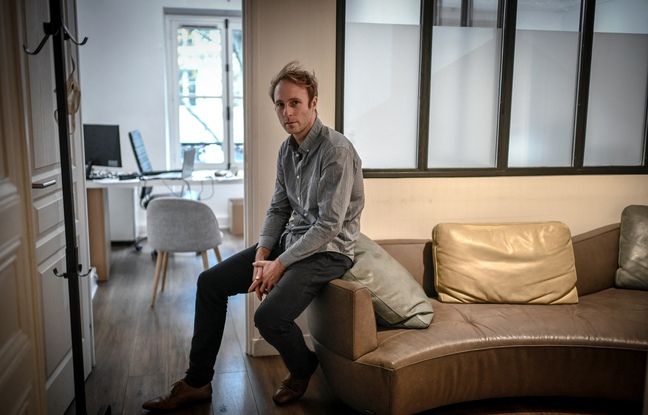 This is perhaps also what we will remember from this Covid-19 crisis, when it is behind us. The scientific community was listened to, divided even torn apart, opposing as much on form as on substance, on the mission of doctors as on the scientific method. Among the doctors who emerged during this health crisis, one of them was the subject of numerous criticisms and at least as many television appearances: Martin Blachier.

But on closer inspection, this public health doctor – registered with the Order – is much less caricatural than his rants on CNews. What is less often put forward is his entrepreneurial hat. About ten years ago, Martin Blachier set up Public Health Expertise, a start-up with ten employees, which sells health models to public authorities and laboratories. And he has not finished explaining his positions: in March, he will publish a book on his journey during the Covid crisis in
Editions du Cerf. Ideal to continue to attract the favors of antivax, the criticism of many colleagues and the light of the media?

“There will probably not be a second wave”,
“Omicron, I called it the phantom wave”… Martin Blachier made himself known for his assertions on the continuous news channels… some of which turned out to be false. With his double role as doctor and mathematician, his outspokenness, his clear-cut positions – sometimes against the grain – and his availability, the epidemiologist has become a regular on TV shows. To the point of sometimes contradicting himself from one intervention to another… He was much criticized for not having anticipated the second wave. “An error”, recognizes the person concerned lip service, when he receives 20 Minutes, Wednesday January 26, in the Parisian premises of his company. Hair in battle, accustomed to defending his convictions, he admits that “there were communication errors”.

On the other hand, for him, there is no doubt: the vaccination pass is not the right method, the vaccination of children is not urgent and the Omicron wave is not dramatic for the hospital. What make some doctors scream, who are looking for places in crowded departments…

His new battle horse? “Leave the children alone”. In December 2021, it goes so far as to launch a petition to keep schools open, without masks, without tests. No regrets, he assures us: “It’s the role of a doctor because the psycho-social impact on children is not sufficiently taken into account. »

“It pissed me off”

But how did Martin Blachier, an unknown before the pandemic, become an omnipresent expert, hated by antivax before being erected as a herald? In March 2020, “when the Covid crisis broke out, we said to ourselves that we were going to embark on a model [épidémiologique] that no one knows how to do,” recalls Martin Blachier. “We”, because the start-up Public Health Expertise is also Henri Leleu, a partner who remained in the shadows, whom Martin Blachier describes with a smile as the “brain” of the company – he would be the “face” .

In April 2020, their modeling under their arms, they set off to tour public institutions: Matignon, the Institut Pasteur, the Ministry of Health and Inserm. With little success. “It got me drunk,” summarizes Martin Blachier, sure that his baby will be useful to decision-makers and not really a fan of public institutions.

On leaving his medical studies and ESSEC, a business school, he had chosen the private sector. “The public is not the place where you can develop the most, especially when you are young, if you refuse to do fifteen years of kissing boots for a career. Not a man to let go, he obtained recognition from his peers in July 2020 by publishing his modeling in the scientific journal Nature Medicine. The attention of the general public, he will seek it himself, by canvassing journalists. And it pays off quickly: he is establishing himself as one of the essential experts at the start of a pandemic.

“We didn’t do the model by saying to ourselves ‘Martin is going to be on TV'”, specifies Henri Leleu. For business, then? “It did not bring us any customers, assures Martin Blachier. We work 80% with foreign countries and in general, it’s on call for tenders. WHO girl ain’t gonna call me ’cause I’m on CNews! Worse, after a while, the business could suffer from this media presence. “There is a risk, Martin asked himself the question, confirms Henri Leleu. Especially since it takes time…”

However, among the customers is the Johnson and Johnson laboratory, which has developed an anti-Covid vaccine. “I never left my domain, he defends himself. I have never touted any treatment or vaccine. »

“It’s someone who removed the conditional from his communication”

After two years, is his image tarnished by his outbursts? Jérôme Marty, general practitioner and member of the collective On the side of science, has regularly crossed swords with the epidemiologist on TV sets: “I saw him emerge as a juggler. He’s someone who removed the conditional from his communication, which is annoying when you’re talking about medicine. He affirms, he is mistaken and reaffirms with the same aplomb. “He assures things without ever relying on anything,” adds Mathias Wargon, head of emergencies at Saint-Denis hospital, another heavyweight in the sphere of media doctors. But who has a precise knowledge of the field.

This is also one of the reproaches made to Martin Blachier, who juggles with the figures, but does not see any patients. “He is one of the people who do poetry medicine, explain the world to us without confronting it”, attacks Jérôme Marty. An inadmissible criticism for many. “A public health doctor does not take care of a patient but of a population, nuance Nicolas Hoertel, psychiatrist and modeler who has known Martin Blachier since 2012. This level of reading can come into conflict with that of a resuscitator. But he insists: Martin is a “hard worker” who knows how to surround himself and respects the scientific approach. “His ability to change his mind shows that he does not have software with an ideology,” insists Nicolas Hoertel, who admits not watching his television appearances. “It’s not just a lone expert opinion! He is a doctor who has the humility to submit his work to criticism and rereading by his peers. Afterwards, the more interviews we give, the more nonsense we say…”

And his defenders regret that he has become a model for opponents of vaccination. Especially since his outings against the vaccine pass. “The antivax cling to part of his speech, they forget that Martin was quickly in favor of compulsory vaccination [des plus de 50 ans], corrects his partner Henri Leleu. Martin has his style, that’s also what he likes. Science is made up of nuances, but at some point, there is a need to simplify the message when you are on a TV set. »

But the wind seems to have been turning for a few months for the ex-darling of the television sets. If Gala, CNews and LCI continue to give him the floor, the other media have distanced themselves. “I go where I am invited,” replies Martin Blachier. I set myself a single limit: the extreme right media. »