The Inter-American Commission on Human Rights (IACHR) condemned this Friday the murder of journalist Lourdes Maldonado, the third case of violent death of reporters in Mexico so far in 2022, and urged the Mexican State to take action.

Lourdes Maldonado, who covered police, corruption and local politics in Baja California, had been in police custody for a year by the time she arrived and left her house, but last Sunday he was shot just when he was in his car, in front of his home in Tijuana. 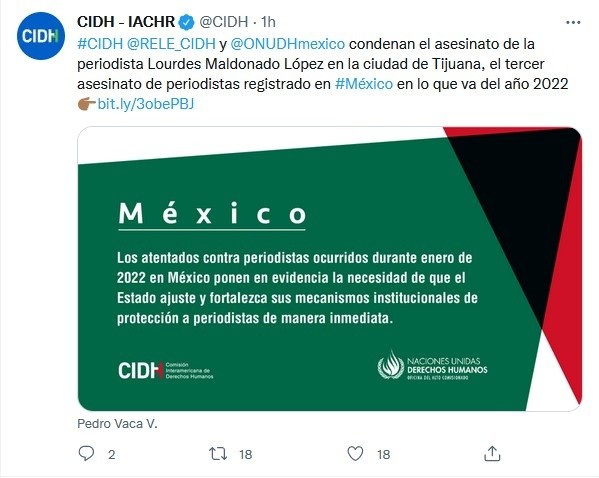 In a statement, the IACHR, together with its Office of the Special Rapporteur for Freedom of Expression (RELE) and the Office in Mexico of the United Nations High Commissioner for Human Rights (ONU-DH) they urge the State “to promptly, seriously and impartially investigate the facts.”

The investigation, they add, It must “clarify not only the perpetrators of the events, but also the intellectual authors of these attacks.”

Four days before her murder, she made public the decision in her favor of the Federal Board of Conciliation and Arbitration (JFCA).

The attacks against reporters in Mexico “reveal the need for the State to adjust and strengthen its institutional mechanisms for the protection of journalists immediately,” the statement added.