Ian Tarrafeta, the new brain of Spain who reads Machiavelli 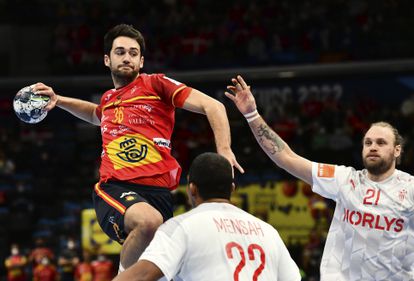 Given the imminence of the generational change that was coming in the Spanish handball team, whenever someone knocked on the door to find out who was coming from behind, the technicians were quick to drop a name: Ian Tarrafeta (Sabadell, 23 years old). For being the most talented of their generation, they exhibited; for occupying the most strategic position in the Hispanic device (central); and because it was going to appear in the same position and just after the last icon, Raúl Entrerríos. So, from one day to the next, the future fell on this young man with a body light (1.88), student of Political Sciences and with an unusual speech that exceeds the margins of sport.

Two weeks ago he appeared in his first major tournament with just 13 caps, with no room for any transition, and he cannot complain about the collective result. “The core of the team has known each other for many years, they know the automatisms by heart and, at this level, where everything is decided by details, that helps a lot”, he underlined this Saturday on the other side of the phone in the preview of the final of the European against Sweden (18.00, La 1). Nobody expected Spain in the last season, among other things, due to the unknown of having so many debutants like him (five in total) instead of such contrasting pieces, but the reliability of the group wrote one of its most unexpected chapters by defeating Denmark in the semi-finals.

Apart from the immediate present in Budapest, his is a complex mission due to the inheritance he receives and he does not shirk responsibility. “There have been times when I have suffered some stress because Raúl [Entrerríos] and Dani [Sarmiento] They have been very important in the last decade, and those of us who are new entrants can feel this pressure. But I try to abstract myself. Now Augustine [Casado, el otro central] and I have to fill that gap. I think we are doing it with note. Neither can we be required in the first championship to make a legend like Raúl forget, ”explains this young man with a Spanish father and a French mother who, he says, never doubted what his team would be.

“That pressure comes and goes. When you play a good game and feel confident, the stress goes away a little bit. Then when you go through a rough patch, it comes back because you feel like, in a way, you’re letting it down. In each experience I learn to mold emotions. It’s like a roller coaster. It’s not something you say: ‘I’m over it’. But it comes and goes,” he adds.

Two seasons ago he left Granollers, where he nursed from the age of 12, and went to Pauc, now third in the powerful French League. “It was a train that did not know if it would pass again. It’s a good place, with options to play in Europe, the salary also has an influence and it has a good physical trainer, which is one of the things to improve. Everything is more physical there. They don’t ask for so much technical and tactical intelligence from central defenders,” explains Tarrafeta, who points out that his mission in a team is to “light the fuse so that everything flows.”

His appearance in the great showcase of the national team is something that has been cooking in recent years. “Ian is the most exceptional thing I’ve ever had. It would be a surprise if it wasn’t someone important”, says Alberto Suárez, one of the most veteran base technicians in Spain, who has had practically all current Hispanics under his command. “It is very difficult for him to do it wrong. To begin with, because of his head, because he has had things very clear since he was a child. He makes play and he plays. It is nothing like Entrerríos, but I have trained both at the same age and Ian is better. Raúl had a slower growth, he couldn’t with his body. Tarrafeta does more extraordinary things, although he still has a long way to go to become Raúl. Ian’s problem is that he is weak in defense and in current handball balanced players are required. He is smart, although he lacks physicality. That will take away minutes”, he warns.

“I would like to transmit the values ​​of sport to society through public policies. It fills me to help people”

But the life of this young Catalan does not end on the slopes. In fact, it looks like he’ll be more out of them than in when he hangs up the shoes. “I study Political Science at the Autonomous University of Barcelona. I understand that it is a bit atypical, but it is a very interesting world. Every year I take subjects”, he points out. “The sports branch catches my attention. That the values ​​of sport that have been instilled in me can be transmitted to society through public policies. Carrying out activities for the children, building facilities… These are values ​​that are sometimes not present and could be achieved with certain policies. It fills me a lot to help people, to do something for society. It’s something I have in mind. For now in an abstract way, but it is defined over the years”, he develops.

The award that he says he is most proud of was an honorable mention from the Higher Sports Council in 2017, in his second year of high school, for his academic and sports results. “I knew that I had to get a high grade in the selectivity, I was with the French baccalaureate degree and I was beginning to climb with the first team. It was an incredibly stressful year and it paid off. I was thrilled to have a little thing at home that symbolizes all that sacrifice.” Now to the European the biography of André Agassi has been taken, although his great literary recommendation in the field of political science is Prince, of Machiavelli.