GREAT MAINTENANCE. Addictions, mental health… How do the “Euphoria” and “13 Reasons Why” series influence their audience?

After a shocking first season, the phenomenal series Euphoria is back. Broadcast on OCS in France, it immerses the viewer in the daily life of American high school students, who seek, in drugs and various excesses, a way out of their discomfort and their anxieties.

The actress Zendaya embodies Rue, a teenager struggling with her addictions and narrator. The actress warned on Twitter : Euphoria “is aimed at a mature audience” and “this season, even more than the previous one, can be difficult to watch”. The series is also crossed by many scenes of physical and psychological violence, as well as nudity. Euphoria is also not recommended for people under 16 in France.

To try to understand how such a series can be received by the public and people affected by addictions and mental health disorders, franceinfo asked Jean-Victor Blanc, psychiatrist at Saint-Antoine hospital in Paris. A specialist in addictions, he is also the author of two essays Pop and psy, how pop culture helps us understand mental disorders (Plon editions) and Addicts (Arkhê).

Franceinfo: How would you describe the Euphoria series?

Jean-Victor Blanc: I think it may be necessary. A series like Euphoria shows mental health with accuracy and a new face since it is particularly well informed. And for good reason, the creator of the series, Sam Levinson, himself had a complicated adolescence with addiction problems that he overcame. What I find exemplary is that in his eyes, he refrains from judging people affected by addictions or mental illnesses, these people who we know too often are misunderstood or stigmatized. So there is a message of tolerance. Sam Levinson does not judge, nor does he trivialize the use of drugs. Euphoria, like other recent series, can also enrich everyone’s knowledge on the subject.

> Listen to Sam Levinson on this subject:

How can the series help viewers better understand mental illness and addiction?

The strength of this program is to enter the psyche of the characters. If we take the example of Rue, we understand the vulnerability that will lead her to drugs. She was born with an anxious temperament, her anxieties are very present. A succession of events, including the disappearance of her father, causes her to meet a product. Finally, it sounds like a lot of patient stories. Several factors mean that after a while, they can no longer manage their life without the products. That is very well shown in the series.

However, not everyone has this reading of the series. In the United States, the anti-drug organization Dare accuses Euphoria of “glorifying drug abuse, addiction and violence”. Can a series really encourage drug use?

Studies have shown that teenagers who have watched a lot of movies or series in which the characters consume tobacco or alcohol are more likely to smoke or drink alcohol. There can be an “incentive effect” or mimicry when the products are presented as having only positive or indispensable effects at the party.

“What I find interesting about ‘Euphoria’ or ’13 Reasons Why’ is that drugs and alcohol aren’t treated as anecdotal or shown as something glorious or romantic.”

On the contrary, we see that the character of Rue tries to get out of it, that there are times when she relapses, that a long journey leads her to recovery… So in the case of this series, the scenes filming addiction, even if they are hard, are not free.

After the broadcast of the series 13 Reasons Why, a fiction that tells the series of events that led to the suicide of a high school student, researchers have pointed to an increase in suicides among adolescents. It’s impossible to establish a direct causal link, but what do you think of this chronology?

The incentive or mimicry effect was major with the 13 Reasons Why series. It was a first with such a popular series. Netflix reacted intelligently. The platform took into account the alerts of health professionals and decided to cut the scene of Hannah’s suicide. We know that showing such a scene to people with vulnerabilities can lead to action.

The scene was therefore cut, prevention messages then accompanied the episodes and Netflix launched a site bringing together Resource, information and telephone numbers for vulnerable people. The actors also participated in the dissemination of prevention messages. It is a responsibility on the part of the broadcaster because it is not insignificant to talk about the mental health of adolescents. It’s also very clever in the sense that this topic hasn’t been censored. Because, I believe, matching a series of media can save lives.

How do you respond to people who find the Euphoria series too violent?

That everyone must respect their sensitivity. If you feel frightened by the subjects exposed, if you feel very distant from them, if you are feeling bad, then obviously it is not a question of traumatizing yourself by watching a dark series which deals with complex subjects. My first piece of advice is to listen to yourself, to avoid forcing your nature. Euphoria is a series on adolescence but one can finally wonder if it is made for teenagers, given the darkness of the themes and the maturity of the subjects involved.

A 16 year old girl died on Friday, January 21, in Lot-et-Garonne, after an overdose of medication. According to the first elements of the investigation, still in progress, she wanted to imitate the characters of the Euphoria series…

It is necessary to know more about this drama to better understand it and not to learn lessons too quickly, not to fall into a psychosis. There is never just one factor leading to risky behavior. I would like to remind you that there is a support and prevention number, available 24 hours a day, 3114. This number must be known. The series can also be used as a support for discussion with those around you to start talking about a discomfort. 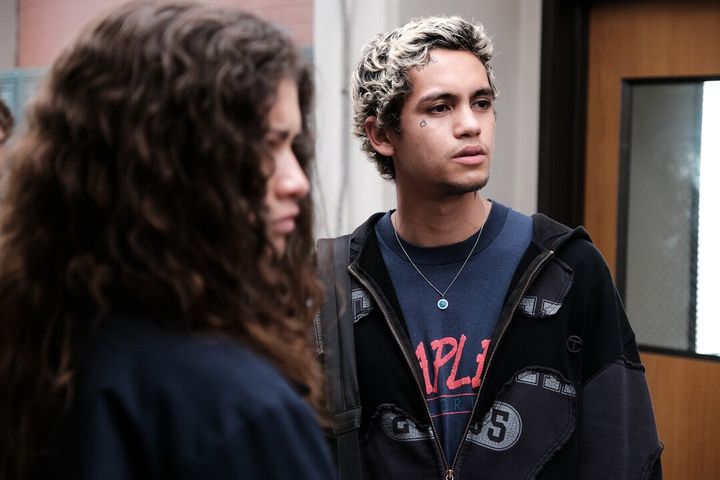 Shouldn’t we remember that Euphoria is a work of fiction, even if it is inspired by the experience of its creator, Sam Levinson?

Indeed, Euphoria remains a fiction above all, it is not a documentary. So there are obviously elements that will be pushed and dramatized, while others will be ignored. There is also a question of rhythm in the writing of an episode. All this, it is good to remind the viewer. The characters are invented, they can represent certain things of reality but it is not a question of transforming them into patients and into reality. Image education is needed. But we also see that adolescents and parents are still poorly informed about mental illnesses. It is therefore also necessary to be educated on these questions to better know what is real or not, and thus take the necessary distance from fiction.

In your book Pop and psy, you write: “It is not normal to go badly in adolescence.” However, it is a period often crossed by turbulences of various orders. What exactly do you want to say?

Yes, I repeat it and you have to say it to yourself when you are a teenager: “It is not normal to go badly in adolescence.” Obviously, adolescence is a period of transition, a time when the personality will be formed. But we often find that the very vague term “adolescent crisis” masks many situations and sometimes the beginning of addiction or mental disorder. Hence the idea of ​​being attentive to these disorders and not trivializing them. Fortunately, most teenagers are free from these mental disorders.

“Nevertheless, the advice that can be given to parents is to trust their instincts because they are often right to worry when they do.”

There are also general signs such as disinvestment in school with a drop in grades, which can be a marker of psychological distress. The fact of turning to the consumption of narcotics or alcohol is also a warning sign, as well as scarifications, attacks on oneself or suicidal thoughts. It is then necessary to turn to a professional who will make an assessment of the adolescent’s health.

If you need help, if you are worried or if you are confronted with the suicide of a member of your entourage, you can reach the 3114, the national suicide prevention number, available 24/7. Line suicide listening can also be reached on 01 45 39 40 00. Other information is available on the website of the Ministry of Solidarity and Health.