Crisis in Ukraine: Macron and Putin agree on “the need for de-escalation” 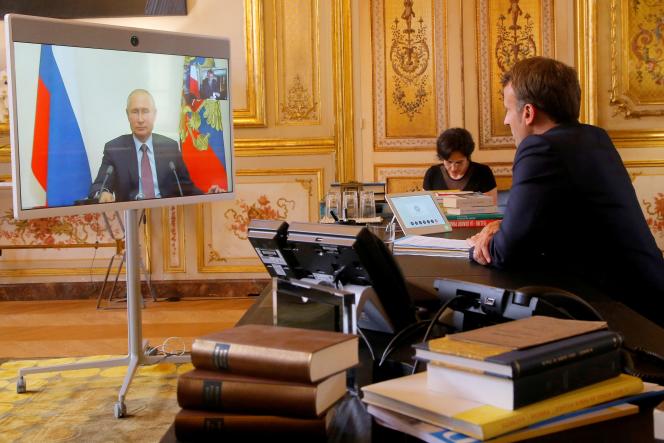 Emmanuel Macron and Vladimir Putin agreed on Friday, January 28, on the “need for de-escalation” and “continued dialogue” in the Ukrainian crisis, announced the French presidency, while on the American side, we still considered a Russian invasion of Ukraine as a real threat. The Ukrainian president expressed concern about the “panic” that Westerners risk creating within his country.

Some 100,000 Russian soldiers have been camped on the Ukrainian border with their armored vehicles since the end of 2021. Russia denies any plans for an invasion, but considers itself threatened by NATO expansion as well as Western support for Kiev. She demanded an end to the enlargement of the alliance, in particular to Ukraine, and a return to Western military deployments on the 1997 borders. The United States and NATO, unsurprisingly, rejected these demands on Wednesday. keys, while leaving the door open to negotiations.

The discussion with Russia remains open, according to Emmanuel Macron

During a telephone conversation between the French and Russian leaders on Friday, “President Putin did not express any offensive intention (…). He said very clearly that he was not looking for confrontation,” reported the Elysée, adding: “Dialogue is difficult”, but the “channels of discussion are open”.

Regarding the conflict in eastern Ukraine – where pro-Russian separatists have opposed Kiev since 2014 – the Russian president himself insisted on the importance of discussions in “Normandy format”, according to a press release from the Kremlin. These talks bring together Russia, Ukraine, Germany and France and aim to implement the 2015 Minsk peace agreements, which have now stalled.

Read also Article reserved for our subscribers Despite his disappointments, Emmanuel Macron continues his policy of reaching out to Vladimir Putin

Mr. Macron then spoke with his Ukrainian counterpart, Volodymyr Zelensky to reaffirm “France’s full solidarity with Ukraine” and recall “its determination to preserve the territorial integrity and sovereignty of this country”. “The two presidents have agreed to continue efforts in favor of de-escalation and dialogue, in particular within the framework of the negotiations in Normandy format”, according to the Elysée.

In the evening, however, Russia announced that it would ban European Union (EU) officials from entering its territory who are “personally responsible for the spread of anti-Russian policy”. “This decision lacks legal justification” and will elicit an “appropriate” response, an EU spokesperson said in a statement.

For his part, British Prime Minister Boris Johnson announced, through a spokesperson, on Friday evening that he would also call Vladimir Putin to urge him to “step back and engage diplomatically”.

“The Prime Minister is determined to accelerate diplomatic efforts and strengthen deterrence to avoid bloodshed in Europe,” the spokeswoman said in a statement.

In addition to this call which must intervene “this week”, the head of the British government must make a trip to the region in the coming days.

British diplomacy must announce Monday in Parliament a toughening of its sanctions regime to allow the United Kingdom, accused of turning a blind eye to the influx of Russian funds on its soil, to target strategic and financial interests of Moscow.

Faced with this diplomatic turmoil, the Ukrainian president on Friday called on Westerners not to arouse “panic” around tensions with Russia. “The probability of the attack exists, it has not disappeared and it has not been less serious in 2021”, but “we do not see an escalation greater than that which existed” last year, assured Volodymyr Zelensky. “This panic, how much is it costing our country? he wondered. “We need to stabilize the economy” of this former Soviet republic, he added. “The greatest risk for Ukraine” currently is “the destabilization of the situation inside the country”, he estimated.

During his conversation with the French president, Mr. Zelensky called for “multiplying meetings and negotiations (…) while a climate conducive to dialogue exists”, according to a press release from Kiev. “As long as diplomatic efforts continue, the likelihood of escalation decreases. President Zelensky also called on Russia to “take steps” to “prove” that it is not going to attack Ukraine.

The United States is categorical

On the American side, the time is not yet for appeasement. Returning from a trip to Pennsylvania, Joe Biden announced on Friday that he would “soon send American troops to Eastern Europe and to NATO countries soon”. “Not a lot,” he clarified. US Defense Secretary Lloyd Austin estimated that with more than 100,000 Russian troops deployed on Ukraine’s borders, Russia had amassed sufficient forces for an invasion, but he stressed that a conflict between Ukraine and Russia was “not inevitable”. “There is still time and scope for diplomacy,” he added.

The day before, the United States had assured that the Nord Stream 2 gas pipeline, dear to Moscow, would be stillborn in the event of a Russian invasion of Ukraine. The fate of this controversial gas pipeline between Russia and Germany will be at the heart of German Chancellor Olaf Scholz’s visit to the White House on February 7. Accused of dithering, the German government has indicated that the “strong sanctions” being prepared by the West in the event of a Russian offensive also include Nord Stream 2, which is still awaiting its commissioning.

Read also Article reserved for our subscribers “Curse, the Nord Stream 2 gas pipeline illustrates the ambivalence of some Europeans on the weapon of sanctions against Russia”

In addition, the United States seized the UN Security Council on Thursday, calling for a meeting on Monday because of the “clear threat” posed in their eyes by Russia to “international peace and security”. The Democratic president raised the “clear possibility that the Russians could invade Ukraine in February”, a date already mentioned by American intelligence.

Chat: “Is Vladimir Putin decided to invade Ukraine? No one has the answer except himself”