Mexico registered this Friday 45 thousand 115 new infections of COVID-19 to reach a total of four million 873 thousand 561 cases, in addition to 437 deaths to total 305 thousand 240 deaths, reported the Ministry of Health.

Last week, Mexico reported its highest numbers of infections, with a historical record of 60 thousand 552 on January 19, in addition to daily deaths above 300.

With these data, Mexico is the fourteenth country in the world in number of confirmed infections and is the fifth with the most deaths from this cause, behind the United States, Brazil, India and Russia, according to the Johns Hopkins University count.

The health authorities recognize that, based on the death certificates, the country may be close to 455,000 deaths and they estimate that Mexico actually accumulates five million 132 thousand 305 infections.

Of the confirmed infections, there are 301 thousand 378 active cases, who have presented symptoms during the last 14 days and account for 5.9% of the total.

In addition, since the start of the pandemic, three million 940 thousand 328 persons. 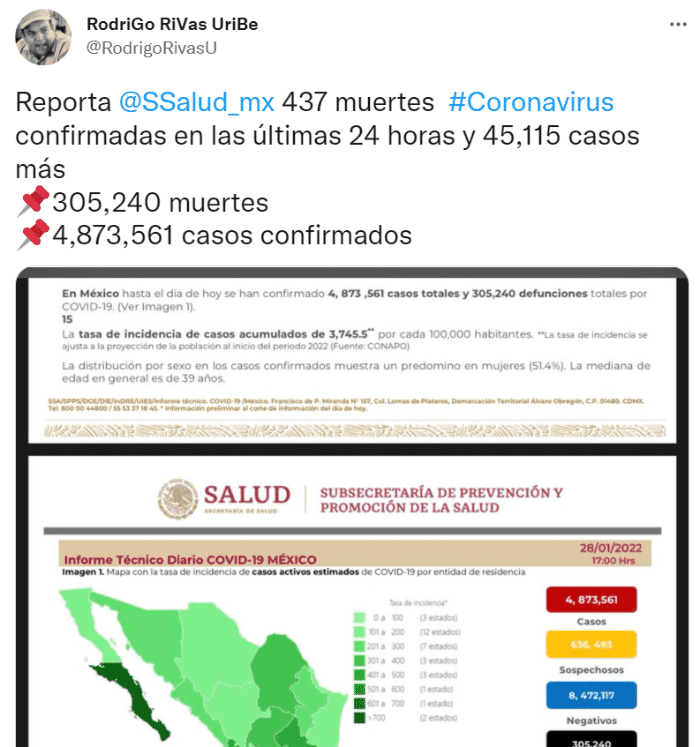 The average occupancy of general beds in Mexican hospitals stands at 46% and that of intensive care at 29%.

Unlike other countries, Mexico spent Christmas holidays without restrictions due to the pandemic. And despite the rise in infections, the Mexican government has defended its management of the health crisis.

Regarding deaths, Mexico City, the focus of the pandemic, accumulates about 17.5% of all deaths nationwide.

With the omicron variant of the coronavirus sweeping Mexico, the country remains without closing activities despite the saturation of free testing centers and which adds record numbers of infections in recent weeks.

This Friday, the Mexican government defended its vaccination plan, which for the moment still does not contemplate immunization against COVID-19 for children between the ages of 5 and 14, despite the recommendations of the World Health Organization. (WHO) about.

“Each boy, each girl is very important, there is no doubt, and childhood is the stage of life that deserves greater protection. However, the probability that a minor person will have a complication from COVID or die” is “very low”, argued the undersecretary of Prevention and Health Promotion, Hugo Lopez-Gatell, during the morning press conference from the National Palace.

However, he pointed out that the WHO issues recommendations, “no mandatory or binding mandates.”

The authorities also indicated that within the vaccination program almost 164.84 million doses, by adding one million 36 thousand 538 during the last day.

The Government of Mexico affirms that it is the seventh country that has applied the most doses in absolute numbers.

While, 76.94 million have completed their vaccination schedule.

On Thursday, the President of Mexico, Andrés Manuel López Obrador (AMLO), assured that the country has reserves of 30 million vaccines against COVID-19 for this 2022.

He recalled that Mexico was the first in Latin America to receive vaccines and added: “We have reservations for this whole year and for everyone, in a democratic way, without distinction.”

López Obrador defended the vaccination strategy, which, he said, has helped reduce deaths due to COVID-19.

Since the end of December 2020, 201.3 million vaccine doses have arrived in Mexico from the Americans Pfizer, Johnson & Johnson and Moderna, the British AstraZeneca, the Russian Sputnik V and the Chinese CanSino and Sinovac.