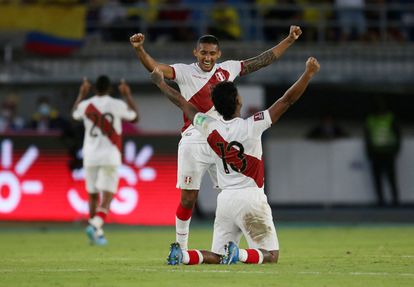 Peru celebrates its victory at the end of the qualifying match against Colombia, in Barranquilla.LUISA GONZALEZ (Reuters)

A sterile Colombia for the umpteenth time suffered the most painful of defeats, while Peru found themselves this Friday with an unexpected victory in Barranquilla that puts them on track to repeat the feat of qualifying for the World Cup. Deploying Falcao, James Rodríguez, Lucho Díaz and Juan Guillermo Cuadrado on the pitch was not enough for the coffee growers, who tried more than twenty shots without success on Pedro Gallese’s goal, who ended up as a figure on the field. Ricardo Gareca’s pupils, withdrawn for most of the match, were satisfied with a fulminating counterattack finished off by Edison Flores at the end of the match to take their first win in Colombia in 21 years.

Reinaldo Rueda, the Colombian strategist, has been unable to prevent the team from collapsing in the qualifying table and decisively compromising its chances of obtaining a ticket to Qatar 2022. Thirsty for results due to the drought of its scorers, the coach sent to the field a team that brought together all the offensive power of its greatest references. Falcao started at the top together with Rafael Santos Borré, James Rodríguez tried to seize the ideas in the midfield, Lucho Díaz unsuccessfully sought to unhinge the Peruvian defense and Juan Guillermo Cuadrado started as a right back focused on attack. None managed to open the way to the goal for a team in crisis.

Colombia already has six consecutive games without scoring, although at the point of draws it had remained installed with many difficulties in the qualifying zone thanks to the anguish of the other teams that still aspire to compete for a ticket to the World Cup. But even before stepping on the grass of the Metropolitan Stadium in Barranquilla, he had the pressure of having fallen, without playing, to fifth place in the table, which gives the consolation of the playoffs.

It was a heads or tails. Uruguay’s crucial victory the day before in Paraguay (0-1), with a goal by Luis Suárez, forced both Colombians and Peruvians to seek victory so as not to let go of the reborn Charrúas, who managed to stop their free fall. The tight fight for fourth place, the last one that grants a direct ticket, was concentrated among those three teams after Ecuador rescued a tie against Brazil (1-1), just the third time that the selection gave up points in the playoffs. Ecuador is entrenched in third place, about to secure its place, while Brazil and Argentina ride the qualifiers, remain undefeated and have secured their presence in Qatar in advance. The fifth, which right now are the Uruguayans, will have the consolation of the playoffs.

Colombia kept the initiative for most of the game. A very active James, although apparently far from his ideal form since playing in Qatar, tried it with a shot that deflected off a defender’s leg, and when he reached the nine position his header went high outside the goal . Falcao was unable to repeat his goalscoring idyll with Rayo Vallecano, and Lucho Díaz, who is second in the scoring charts in the Portuguese League with Porto, did not manage to unbalance either. Cuadrado, who alternated free throws with ten, could only get close to the goal with a closed corner kick saved by Gallese, while from the other side Johán Mójica repeated himself with long-distance shots that did not find a door. There is no way to break the dam that contains the celebrations of a Colombia that has run out of ideas.

When everything pointed to a frustrating goalless draw, five minutes from the end Cristian Cueva crowned a fast counterattack with a magnificent pass to Flores, who burst down the wing against a dislocated defense and finished off with a powerful left-footed shot to the post by David Ospina. Peru rests in the coveted fourth place with 20 points. Colombia no longer depends on itself and sinks with 17 in sixth place, two from Uruguay and three from the Incas when there are only three dates left to know the outcome of the South American qualifying marathons.