Buying a castle in Spain is not a fairy tale 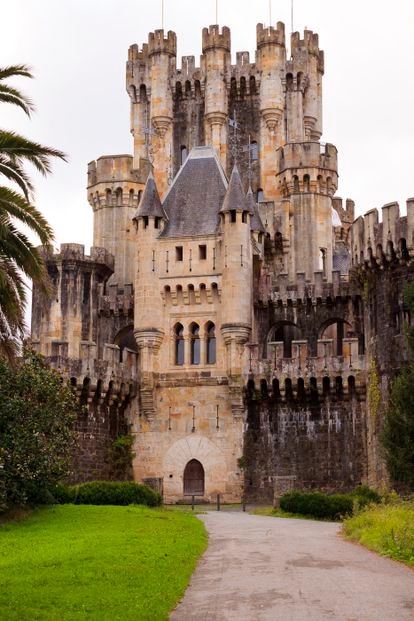 Live in a castle like the ones at Disney. This is the luxury that can be enjoyed by an anonymous tycoon who last December bought the Butrón Castle in Gatika (Bizkaia) for four million euros. The building, from the 13th century and the scene of medieval wars, was remodeled to Germanic taste in the 19th century, hence the reasonable resemblance to that of Neuschwanstein, in Bavaria (Germany), which served as inspiration for the logo of the American entertainment giant . But having a castle is not so idyllic. The problem is not so much the price as the legal obligations that having a good of this type entails.

Whoever buys a castle in Spain is acquiring a property of cultural interest (BIC). This is so by virtue of a decree of 1949, later validated by the Spanish Historical Heritage Law of 1985. These fortresses, whatever their state of conservation, enjoy the maximum protection offered by the law for national heritage assets. Regardless, says José Méndez, managing partner of the Méndez Lit firm, “whether they have been officially declared BIC or not.”

This implies that the owners have to preserve them and respect their originality. They cannot make alterations without authorization or dedicate the building to activities that may affect the property. They may even be required to facilitate visits. The reason, explains Rafael Mateu de Ros, partner in charge of the Department of Art and Cultural Heritage of Ramón y Cajal Abogados, is that, although their property is private, “they are considered to be in the public domain.”

A different question is what should be understood by castle. A generic term that today is assimilated to that of defensive architecture, and that “encompasses all defensive elements from Prehistory to the 20th century: forts, walls, strong houses or fortified religious buildings, among others,” says Pablo Schnell, member-librarian of the National Board of Directors of the Spanish Association of Friends of the Castles (AEAC). The association has inventoried 10,352, although there are many others unaccounted for.

The purchase of a castle is full of singularities. To begin with, says Roger Dedeu, founding partner of Gabeiras & Asociados, the operation may be delayed for months due to procedures with the Administration. When the owner of the property decides to sell it, he explains, he has to notify the autonomous community in which it is located “in case it, or the State, want to assert their right of first refusal (preferential acquisition) for the price offered within two months, which normally does not happen.

Then there is the issue of maintenance and upkeep of the castle, which involves “a constant and high expense,” says Dedeu. Aid for restoration, laments Mateu de Ros, “is not always granted or is insufficient”. The budget also shoots up because they must have specialized technical personnel for the works. Everything is protected, Mendez warns, “from the roof to the doorknob.” Moreover, if the owners do not meet the requirements to carry out any maintenance, they face a fine and pay out of pocket for the actions carried out. Even, ultimately, to the forced expropriation of the building.

Open to the public

Nor can the castle be disposed of with the freedom with which any private property is used. There are some limitations, Dedeu points out, “that have to do with urban planning and with access and use”. The owners have to allow inspections, and, if so provided, public visits. In Asturias, for example, they must open the doors at least four days a month unless it is “their continued residence,” says Mateu de Ros. In 2003, the Superior Court of Justice of Catalonia fined the owner of a 10th-century castle, located in Talamanca (Bages), 8,932 euros for refusing to show it to the public.

Few people live in a castle today, so to maintain it, you have to exploit it. Butrón Castle, for example, has appeared in advertisements and television programs. But any activity is highly supervised. The owners must request authorization to hang any kind of sign, advertisement or commercial poster on the facade. In addition, Méndez points out, there are a series of criminal risks. As the lawyer and collaborator of the Hispania Nostra association for the protection of Historical Heritage warns, “the promoters of a macro-party could be prosecuted if they cause damage to the interior or exterior, or minimally alter its configuration.”

The usual thing is that those interested put themselves in the hands of experts. “You have to analyze all the applicable legislation to know exactly what can and cannot be done at the urban, tourist, environmental, industrial and commercial level,” explains Dedeu. A relevant prevention when you are thinking of using it for weddings and other events. The lawyers also advise, adds Mateu de Ros, on other types of doubts such as, for example, “the discovery of some architectural remains”.

Normally, whoever buys a castle has money to maintain it. The problem, Méndez points out, is usually “those who receive it through lineage as an inheritance.” Despite the interest of the local population to preserve a piece of their history, if there are no resources, many end up abandoned. “Only the most relevant due to their notoriety enjoy real protection through public intervention,” he laments. “Many are ruins in hard-to-reach places that seldom arouse the interest of administrations,” agrees Schnell. But, for lovers of fortifications, “they are as important as those restored in the center of towns.”

In exchange for the legal obligations that they have as owners of a castle, the owners can apply for public aid for maintenance or repair works. Sometimes, the owners of an asset of cultural interest can also take advantage of the exemption from the payment of the municipal real estate tax, better known as IBI. However, to enjoy this exemption, explains Rafael Mateu de Ros, partner in charge of the Department of Art and Cultural Heritage of Ramón y Cajal Abogados, “the castle must not be subject to economic exploitation”. That is, it cannot be a hotel or have a restaurant.

This is how Friday went for Verstappen: Red Bull cannot keep up with Ferrari | NOW

Weather Mexico: They expect the first cyclone of the season to form this weekend