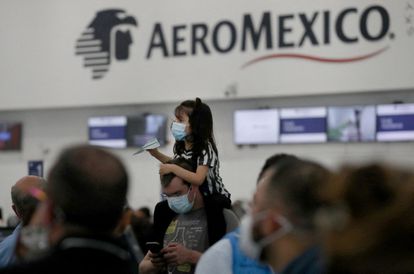 Mexico’s largest airline is one step away from bankruptcy. A court of the United States bankruptcy court has approved this Friday the Aeroméxico restructuring plan and with this the way has been paved for the airline to get out of Chapter 11 of the US Bankruptcy Law, which it filed for in June. of 2020 due to the economic debacle caused by the pandemic. After two days of hearings, Judge Shelley Chapman of the New York Bankruptcy Court has approved the plan after the last-minute agreements reached between the company and its creditors and in the coming weeks it is expected that the bankruptcy exit will be formalized. the company.

The general director of the airline, Andrés Conesa, has celebrated the decision of the US court. “I want to thank our employees and the board of directors for their invaluable support, as well as all of our restructuring advisors who did an excellent job in helping us lead our beloved airline in these turbulent times,” he said in a statement sent to the press. Mexican Stock Exchange (BMV), this Friday.

The company reached an in extremis agreement with Invictus Global Management, a creditor that agreed to withdraw its objection against the plan by agreeing that it will be paid $1.1 million. A day earlier, Aeromexico’s lawyer had declared that an agreement of 40 million dollars had also been reached with a group of unsecured creditors so that they withdraw their objection to said plan. Its restructuring project, according to the company, will reduce its debt by one billion dollars and save some 13,000 jobs. The airline also plans to build on its joint venture with Delta Air Lines and partnerships with other SkyTeam Alliance airlines, as well as expand a partnership with Latam in South America.

Delta, which owned 51 percent of Grupo Aeroméxico before its bankruptcy, will retain a 20% stake in the reorganized airline. Apollo Global Management, which led the airline’s debtor-in-possession financing package, will emerge with a 22.4% share and a group of Mexican investors who were previously part of Aeroméxico’s board will have a 4.1% stake. %. The remaining shares will be distributed among creditors and new investors.

The decision of the New York Court represents a light at the end of the tunnel in a process of multiple turbulence that Aeroméxico is still facing. The airline remains unable to add new flights to the United States after the Federal Aviation Administration downgraded Mexico’s safety rating to Category 2. The safety rating also prevents partner Delta from selling tickets on Aeromexico-operated flights.

Although operationally Aeroméxico has already shown signs of improvement in passenger flow, compared to last year, it is still going through a financial crisis. As of the third quarter of 2020, the company reported a net loss of 2,244 million pesos and income in that period of 13,234 million pesos, 28% below the income reported in 2019, prior to the pandemic. In addition, the company will have to compete with Viva Aerobus and Volaris, two airlines that have been gaining ground in recent months.