Until when will the record contamination figures get carried away? 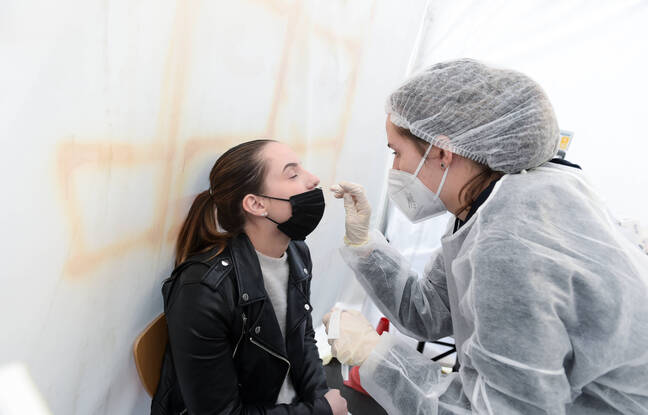 This is a record figure: 501,635 new cases recorded in twenty-four hours, according to Public Health France. This Tuesday, the threshold of half a million contaminations was therefore crossed for the first time in France. Under the effect of the highly contagious Omicron variant, the epidemic wave of Covid-19 continues to swell in France and reaches dizzying figures, making France one of the countries where the virus circulates the most in France. Europe.

But with such figures, how long will these record contaminations last? Will we all have contracted the virus and developed protective immunity against it in the coming days? Is the epidemic peak finally in sight? Or could Omicron’s BA.2 sub-variant put a part back in the machine?

On November 23, when the planet discovered this new variant unearthed in South Africa, the Delta strain dominated in France, which recorded around 30,000 contaminations in twenty-four hours. On New Year’s Eve, when Delta was replaced by Omicron, more than 232,000 cases are recorded. On January 5, it’s 100,000 more. And since then, the escalation of record numbers has never stopped. Since January 1, one in ten people tested have tested positive, according to
Public health France. And after 500,000 cases and 30,000 hospitalizations recorded on Tuesday, more than 428,000 contaminations were detected on Wednesday.

And “that’s not counting the contaminations that go under the radar: to get an idea of ​​the real figure, you have to multiply the daily data by two, underlines Mircea Sofonea, lecturer in epidemiology and evolution of infectious diseases at the University from Montpelier. That is around a million contaminations every day “in France. In a few weeks, “Omicron has changed the face of the epidemic: we are no longer even in a universe that resembles seasonal flu, which affects 5 to 10% of the population in France during major epidemics. There, we will approach 50% of contamination within the French population, notes Antoine Flahault, epidemiologist and director of the Institute of Global Health in Geneva. On such a scale, the consequences are multiplied, as we saw a few years ago during the chikungunya epidemic which raged in Réunion and affected 40% of the population. This led to significant disorganization, GDP was impacted and excess mortality was recorded. Whereas, there too, we were faced with a virus which can be mild and lead to rare deaths ”.

“It is increasingly difficult to establish epidemic trajectories”

With a strain that is much more transmissible and numbers that are racing, can we have a reliable estimate of the continuation of this Omicron wave? “The further we go, the more methodologically difficult it is to make projections. They are no less reliable, but integrate more and more parameters which make the modeling more complex to establish: number of doses received, number of infections, by which variant, at which moment… Thus, we can only do explore short-term scenarios, warns Mircea Sofonea. Then, it is much easier to model epidemic trajectories, both from the point of view of contamination and hospitalizations, when the reproduction rate, the famous R, is stable over several days, he explains. These parameters make it possible to estimate the peak, and to give visibility on the needs for critical care beds, which is important for hospitals to be able to anticipate and organize themselves”.

At the beginning of January, the models from the Institut Pasteur are counting on a peak for mid-January. “The figures stuck with the projections, then the contaminations exploded and we do not know why, indicates the epidemiologist. However, we adapt our projections to the intrinsic virulence of the variants, but the epidemic resumption which followed the start of the school year at the beginning of January went well beyond what we could expect with Omicron. This demonstrates that this is due to behavioral factors, with a significant relaxation of barrier gestures, which are difficult to translate into mathematical data. So we cannot make projections on the peak of this Omicron wave and its decline”.

But then, with around a million daily contaminations and 66 million inhabitants, it should only be a matter of days before the epidemic peak is reached? “In theory yes, in two weeks, according to an optimistic scenario”, estimate the two epidemiologists together. “The epidemic seems to be converging towards an R of 1, which means a drop in the number of people infected by a single patient. So the peak could be reached in the coming days, ”reassures Antoine Flahault. And “mathematically, if the relaxation of barrier gestures has reached its peak and considering that we accumulate post-infectious immunity, this should cut the fuel of the virus”, adds Mircea Sofonea.

But BA.2, the sub-variant of Omicron, could be a spoilsport. “In Denmark, where BA.2 is the majority, we expected to reach a peak in mid-January, but the epidemic is playing out and the peak is not in the news, the outbreak continues. And in the United Kingdom, where it is also present, the rapid decline that had begun has been stopped, notes Antoine Flahault. It would be necessary to understand these two cases and see if it is transposable to the French situation”. But for the time being, “only a few cases of BA.2 have been detected in France, which is insufficient to estimate its transmission advantage, adds Mircea Sofonea. If we want solid projections, we need French data: as each country has its own restrictive measures, its own vaccination coverage figures and a set of parameters specific to it, we cannot simply look at a neighboring country and say to ourselves that the French epidemic will follow exactly the same trajectory”.

The immunity in question

It remains to be seen whether the high figures of contaminations in France will lead to a form of immunity and how it will resist or not in the face of the sub-variant. However, “the Danes have observed cases of reinfections, but we do not know if they are anecdotal and have only affected a few immunocompromised people – which would not be surprising – or if they are legion”, raises Antoine Flahault. “If these data pointing in the direction of a possible reinfection by BA.2 after the original strain of Omicron were confirmed, then we could forget part of the immunity acquired by the current wave of Omicron, and that would be left for a round, confirms Mircea Sofonea. But we are not there today, and we know that new variants emerge frequently”.

“In any case, the current wave should not be seen as the key to magical collective immunity, tempers Antoine Flahault. There are currently 400 deaths per day in France, children hospitalized without risk factors and unvaccinated young people in intensive care. We can fear a significant mortality effect on the first trimester”. And this, “for a preventable disease, completes Mircea Sofonea. It is therefore time for cautious optimism: we have the therapeutic means to make the burden of mortality from this virus as low as possible, with vaccines and new treatments. And by keeping the barrier gestures for the duration of this wave, the risks of being sick are very low ”.

China after Biden promise to Taiwan: ‘United States is playing with fire’ | NOW

“The dirty campaign is incredible”: the rector of the UdeG accused the government of Jalisco for protesters outside his house