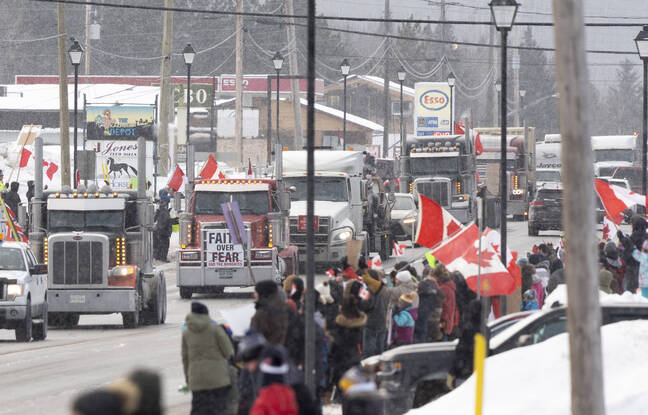 He is headwind against “tyranny”. Fiercely opposed to numerous anti-Covid government restrictions, Elon Musk on Thursday gave his support to the “freedom convoy” of Canadian truckers who are approaching Ottawa. Between 1,000 and 2,000 trucks expected in the Canadian capital on Saturday, and intend to block Parliament Hill to denounce the vaccination obligation necessary to cross the border between Canada and the United States. And the authorities fear violence from a minority that could be inspired by the attack on the Capitol in Washington on January 6.

“Long live Canadian truckers,” tweeted the boss of Tesla, who has nearly 72 million followers. Thursday evening, his message had been liked by more than 300,000 people. In September 2020, Elon Musk had indicated that he did not intend to be vaccinated immediately. But recently, he confirmed to Time Magazine that he had indeed been immunized, as had his eligible children.

Warning from the authorities

The convoy set off from Vancouver last Sunday, notably at the initiative of Tamara Lich, the secretary of the Maverick Party, a Canadian separatist party. Although there were only a few dozen trucks initially, the group has grown over the days. Le Toronto Star mentioned unsourced projections of up to 50,000 trucks. But the figure is actually much lower: according to an official police report, between 1,000 and 2,000 vehicles are expected in Ottawa this weekend. Enough, all the same, to paralyze Parliament Hill. And to fear overflows.

As pointed out by the daily The Press, there are links between a minority of participants and extremist and supremacist groups. In a video removed by YouTube, a man called for a repeat of the storming of the US Capitol. According to the House of Commons security official, some protesters were looking for MPs’ home addresses in Ottawa. On Facebook, Tamara Lich called for peaceful demonstrations and invited truckers to denounce the overflows.

Between 85 and 90% of drivers vaccinated

Canada and the United States impose a vaccine passport against Covid-19 to cross a 9,000 km long border. The measure came into force on January 15 in Canada and last Saturday in the United States. According to estimates by the main union, between 85 and 90% of drivers are vaccinated.

Elon Musk is not the only one to have supported the “truckers”. In the United States, Donald Trump Jr has called on Americans to join the movement. “Tens of thousands of freedom trucks converging on Ottawa have awakened an entire people,” Florian Philippot greeted on Twitter Thursday.

Canadian Prime Minister Justin Trudeau denounced the action of a “small marginal minority”. According to a survey of Maru Public Opinion published Thursday, only 28% of Canadians are opposed to the vaccination obligation for truck drivers.

The number of overweight people is increasing: ‘Treatment of unhealthy products too great’ | Health