Spain enters 223,382 million for taxes in 2021, the highest collection in history 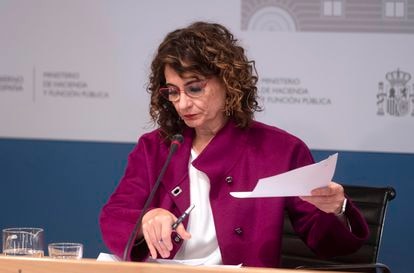 The Minister of Finance and Public Function, María Jesús Montero, appears before the media this Thursday to present a preview of the tax collection closing data for 2021, at the Ministry Headquarters in Madrid (Spain). Alberto Ortega (Europa Press)

The Spanish economy shows symptoms of unusual vigor after the blow of the year of the Great Reclusion. Employment has recovered to its pre-Covid level and tax collection has skyrocketed like freshly uncorked champagne, pushing public revenue to an all-time high. The Public Administrations entered last year a whopping 223,382 million euros, which represents an increase of 15.1% compared to last year. Never in the records of the Tax Agency had such an abundant harvest been achieved. It is also the highest growth rate since 1995, when the public records of the Treasury started.

The flow of income has surprised even public officials. “The tax collection data met the budget revenue forecasts for the first time in a decade,” said the head of the Treasury, María Jesús Montero, during the presentation of the official figures. Since 2010, the Government was unable to meet the Revenue Budget. Then the socialist José Luis Rodríguez Zapatero ruled. Spain was going through a transition stage between the Lehman Brothers financial crisis, which led to the bursting of the real estate bubble and the banking collapse, and the sovereign debt crisis, which broke out in 2011. The minister at the time designed prudent budgets for the hard experience of the previous years, and the impetus of Plan E and other fiscal stimuli managed to make the Spanish economy recover slightly, although it was not enough and the following year the financial markets were primed with the Spanish public debt. But that’s history.

Tax statistics show that only in the real estate bubble, in 2010 and last year, tax revenues improved forecasts. It is common for governments to inflate revenue budgets to match spending commitments. All governments have done it. For this reason, the Minister of Finance stood out for the good data, highlighting that “they show the prudence and realism of the estimates included in the 2021 Budgets. This Government follows a prudent budgetary policy and the results support it”, Montero stressed, who emphasized that the collection figures “reveal the solid recovery of the Spanish economy after overcoming the toughest phase of the pandemic.”

This improvement in collection is due to several reasons: firstly, the strong rebound in activity after the enormous drop in the previous year, the income maintenance policies that the Executive defended during the worst of the pandemic, with public aid to families and companies, the ERTE policies, which avoided a barrage of layoffs as has happened in other crises in Spain. The emergence of the submerged economy, due to the upturn in activity and the rise of electronic payments and the fall of cash. All these factors have been considered by experts with more or less emphasis.

These explanations justify that personal income tax improved by 7.5%; VAT, 14.5% and special taxes, 5%, but there is another explanation that some analysts also slip: in 2020, the year of confinement, banks and large companies took the opportunity to make provisions and clean their accounts, the corporate tax harvest was meager, the lowest since 1999. Last year, however, the financial sector and the large Ibex companies took the opportunity to show off profits and contributed more to corporate tax. In fact, the collection for this tax that is levied on business profits grew by 67.9%, an unprecedented rate in the Treasury’s statistical file.

Montero specified that the improvement in collection is not due to higher inflation, since the underlying inflation data is around 2%, so the rise in prices is concentrated in the energy sector, where there has been a significant tax cut. On this last point, the tax reductions on electricity or masks indicated that they had an impact of 2,392 million.

Entering the breakdown of tax collection, and after assessing the good employment data known this Thursday, Montero explained that the increase in Social Security affiliates represents an improvement in the collection of Personal Income Tax (IRPF). Specifically, the collection for this tax grew by 7.5%, to 94,546 million euros, above the budget forecast.

Due to its strong growth, the collection for Corporation Tax stands out, which increased by 68% compared to the previous year, to 26,628 million euros. This is explained, according to the head of the Treasury, by the improvement in business profits, whose declared profits rose by 73.8%. “Recovery is not a mirage, but a palpable reality”, the minister reaffirmed. Likewise, installment payments rose by 53.7%. Similarly, with the recovery of consumption, VAT collection has increased. Specifically, this tax earned 14.5% more compared to 2020 and 1.3% more than in the pre-pandemic year.

The collection figure thus stands at 72,493 million euros, registering increases in the payment of this tax by both large companies and SMEs. Regarding special taxes, the evolution was also positive, although somewhat more modest. These taxes registered an increase of 5% more than the previous year, up to 19,729 million. Montero explained that the collection for these taxes was somewhat below what was budgeted by the regulatory measures approved during the year to, for example, mitigate the increase in the price of electricity.

Specifically, the reduction of the Special Tax on Electricity from 5.11% to 0.5% from mid-September has allowed families to save 333 million euros, which is reflected in the fall of 12.2 % in the income of this figure. However, other special taxes such as Hydrocarbons, Alcohol or Beer have increased as a result of increased consumption and economic activity.