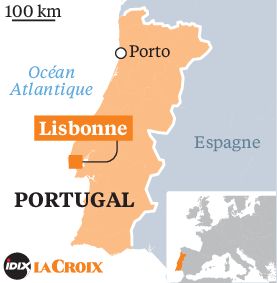 This is the story of an election that should never have taken place and which could plunge Portugal into political instability. This Sunday, the Portuguese will vote for the third time in a year. There was the presidential election on January 24, 2021, which saw the re-election of the outgoing president Marcelo Rebelo de Sousa, from the Social Democratic Party, the municipal elections on September 26 won by the Socialist Party, despite a surprise defeat in Lisbon won by the right, and this Sunday January 30, the Portuguese will return to the polls to, this time, renew the 230 seats in their Parliament.

The electoral campaign ends this Friday in the particular context of the pandemic. Posters in the streets and in the main squares of Lisbon, but no rallies. No question of tempting the devil when the country can boast of having succeeded in vaccinating 89% of its population. The campaign was mainly carried by the media and the debates on television channels. These early elections surprised everyone. “Neither Portuguese society nor the political elite expected the fall of the government. The president would have preferred to wait until 2023 for the legislative elections and continue with government stability, ”analyzes political scientist Antonio Costa Pinto, researcher at the Institute of Social Sciences at the University of Lisbon.

Since 2015, the Socialist Party shared power with the Left Bloc and the Communist Party. A makeshift team nicknamed the “geringonça” (the “thing”), which had succeeded in restoring the Portuguese economy after the years of austerity imposed by the right in power.

Today, Portugal can boast of having sustained economic growth (estimated at 5.5% in 2022), a low unemployment rate (6.3%), a balanced budget, a rising minimum wage and a increase in retirement pensions and salaries of civil servants. But the Communist Party’s refusal to vote on the 2022 budget derailed the Portuguese train, and the president had no choice but to dissolve the Assembly. The famous “Portuguese exception” is over.

After Sunday’s election, Prime Minister Antonio Costa, leader of the Socialist Party, should be reappointed as head of the next government. A 60-year-old lawyer, alternately MEP, interior minister, then mayor of Lisbon, son of journalist Maria Antonia Palla and writer Orlando Da Costa, of French and Indian origin from Goa, he can enjoy great popularity. If “the polls show that the two traditional parties, the Socialists of Antonio Costa and the Social Democrats (PSD) of Rui Rio should win two-thirds of the seats in Parliament”, according to analyst Antonio Costa Pinto, the Prime Minister will have to find new partners.

Because he may well call on the voters to give him the majority, there is little chance that he will obtain it. “After the election, we are all going to have to talk to everyone. We will have to talk to the Bloco (left bloc, editor’s note) and to all the parties that have a parliamentary seat, with the exception of Chega, with whom there is not much to discuss, “said the first Minister in an interview with Radio Renascença. Targeted, the far-right party, Chega (“Enough”), led by populist André Ventura, 39, has flourished since arriving in Parliament in 2019 with a deputy. He is now credited with 6 to 7% of the vote and could, with a dozen deputies, climb to the third step of the podium.

Two days before the election, all votes are precious, like those of the 600,000 people currently in quarantine, two-thirds of whom are potential voters, out of a total of 9.3 million registered voters on Portuguese territory. They will be able to break their isolation on Sunday to go to vote but, in order to avoid the spread of the virus, the government recommends that they go to the polls an hour before the closing of the polls

Mbappé extended to PSG, the end of an extraordinary soap opera

Juice vlogger Yvonne Coldeweijer falls into the trap of journalists