Turn your life into a flesh reality show made Kim Kardashian the millionaire and well-known star that she is today. However, a few years ago the most visible head of the klan Kardashian is trying to redirect her image and give it a more serious, more professional, more adult veneer, away from tantrums and television romances. She, logically, does not abandon the program that gave birth to her as a global celebrity —although now she has made the leap to another chain, with another name, she is still there and continues to be an irrefutable formula for showing the insatiable search for fame—, but She mixes it with her facet as a businesswoman, a student, a future lawyer and, now, a friend of the richest and most powerful.

Because if Kardashian has learned something in these two decades of fame since she began as an assistant to Paris Hilton, it has been to get closer to the suns that heat the most. Something that has been shown this week in two private but well-publicized acts, very much in his style. On Monday, the businesswoman was seen having coffee in Los Angeles, where she lives, together with the former US Secretary of State and also former First Lady Hillary Clinton and also with her daughter and former President Bill Clinton, Chelsea.

The meeting of the three women seemed like a coffee between friends, but the objective of it and the chosen place hid more intentions. As eyewitnesses have explained to the web TMZ, the three were accompanied by cameras, a complete recording team. Apparently, everything was part of the filming of an episode of Gutsy Women, the program that the Clintons are doing to premiere soon on Apple TV + and that at the same time is based on the book that both published in the fall of 2019, The Book of Gutsy Women: Favorite Stories of Courage and Resilience (The Brave Women’s Book: Favorite Stories of Courage and Resilience). 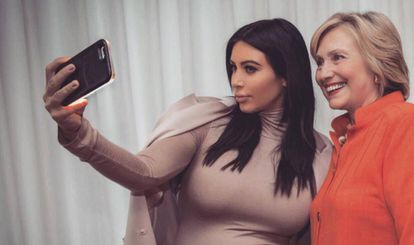 Kim Kardashian and Hillary Clinton take a selfie together in January 2016. Cordon Press

The Clintons and Kardashians had breakfast at the so-called Hot&Cool Cafe, a place located in the Canoga Park area. The place is specialized in vegan and healthy food, but it also has a mission and is very integrated with the community, since according to TMZ it only hires black employees, many of them young people who have had difficult childhoods and adolescences or former inmates. Kim Kardashian is very committed to this issue, helping inmates with what she considers to be long and unjust sentences, often because of their race, to get out of prison early, so the place seemed like the perfect setting for the interview. Kardashian went to the White House and held a meeting with then-President Donald Trump to discuss the case of an inmate who served more than 20 years in prison for a drug crime without violence. In fact, she is now studying law to become a lawyer.

However, not only social causes move Kardashian. Money and power are also his great allies. According Forbes, the businesswoman and mother of four children has a fortune estimated at around 1,080 million euros. But there are always those who have more than her, like Jeff Bezos, the founder of Amazon and considered the richest man in the world. And precisely with him he met on Tuesday for dinner.

With a fortune of 148,000 million euros, the owner of the e-commerce giant invited Kardashian to his house. She went accompanied by who now the US media say is her new partner, the comedian Pete Davidson. According to TMZ, they both went to Bezos’s mansion in Kardashian’s car, spent a few hours there, and then both went to the hotel where Davidson is staying. The comedian is based in New York, but it is becoming more and more common to see him on the west coast of the United States. 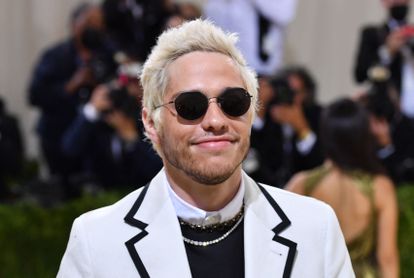 The actor and humorist Pete Davidson, in September 2021 at the gala of the Metropolitan Museum of New York. ANGELA WEISS (AFP)

Kim Kardashian’s ambition does not seem to hit the ceiling. As a business woman, she is doing better than ever. If he began his adventure five years ago in the world of cosmetics (he sold 20% a couple of years ago and thanks to that he earned 180 million euros), now his most buoyant business is underwear. Thanks to Skims, the successful line of bras, panties, t-shirts and girdles that I created two years ago and that continues to grow, she has become a renowned businesswoman. In fact, according to the economic portal Bloomberg in the last nine months of 2021 Skims has doubled its value, and is already estimated at 3,200 million dollars (about 2,880 million euros). In addition, it has just raised 240 million dollars (more than 215 million euros) in a round of financing from several investment firms.

As she explained to the portal through an email, thanks to this round they will be able to “provide more innovations and solutions” to their clients and thus become “a trusted resource for them. Kardashian is the founder of the company, as well as a designer and the perfect strategist for its marketing campaigns, but she is also its largest individual shareholder. At the moment he does not want to sell it, but according to his partner that may happen in the future. And that would make Kim Kardashian an even richer woman.