INFOGRAPHICS. How the minimum wage is increasing in several European countries

This is an unprecedented increase that awaits some European countries. For the year 2022, several governments have validated a significant increase in their minimum wage. But not France, even though several demonstrations were held all over the country, Thursday, January 27, to demand an increase in wages and an improvement in purchasing power.

It is in Germany that this variation will be the strongest. While the minimum wage was only introduced in 2015 in this country, it is expected to increase by 25% by October 2022, from 9.82 euros to 12 euros per hour. In the United Kingdom, this increase in 2022 should reach 7%, and just under 4% in Spain. This is the fourth increase in the Spanish minimum wage under the government of Pedro Sanchez, whose objective is to raise this income to 60% of the average wage by the end of the legislature, in 2023. “There will be no no economic recovery if it is not fair, if it does not reach all layers of society,” the socialist leader said last September. 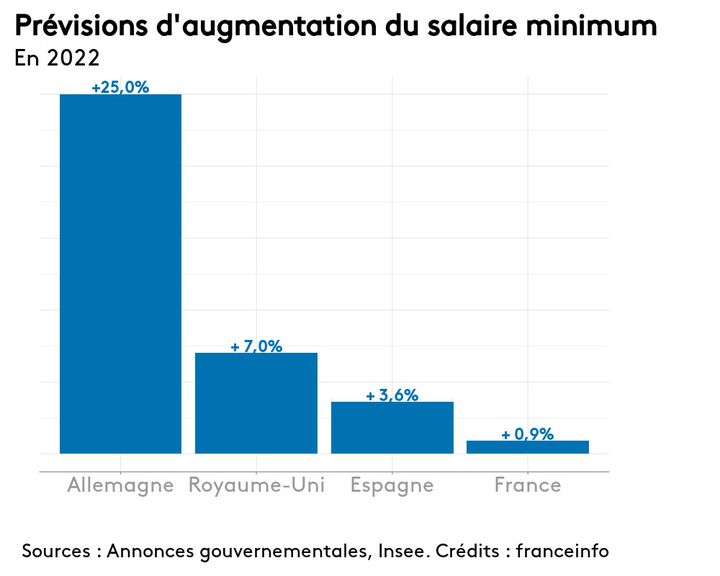 But in France, INSEE announced in mid-December last that the automatic revaluation of the minimum wage would amount to only 0.9%, from 10.48 to 10.57 euros. It had already been increased by 2.2% on October 1, 2021 to cope with inflation, and Elisabeth Borne, Minister of Labor, had indicated on December 16 that it would not benefit from a “boost”, other than beyond this automatic revaluation.

This comparison of the minimum wages of these European countries makes it possible to realize the advance that France had on the remuneration of the most precarious employees. It has long been the country with one of the best minimum wages on the continent. But France is gradually being overtaken by its neighbors.

This is shown in the graph below, which compares the evolution of the minimum wage, relative to the median wage in each country. For a long time, France was the only country above 60% of the median salary. But since 2015, Portugal, the United Kingdom and Spain have gradually reached this threshold. And the increase forecasts for 2022 should further reduce these gaps. 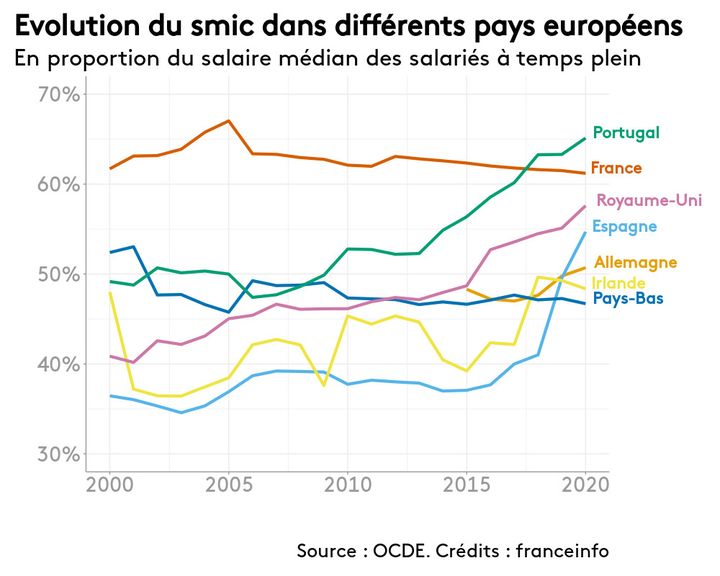 Evolution of the minimum wage in several European countries since 2000. (FRANCEINFO)

According to these OECD data, between 2010 and 2020, it is Spain that has experienced the largest increase in its minimum wage: +45% in ten years, most of this increase having taken place since 2018 and the arrival of the socialist Pedro Sanchez in power. The countries which have seen their minimum wage increase the most over the period are then the United Kingdom (+25%) and Portugal (+23.4%).

In December 2021, the 27 EU member countries had adopted a common position on new European rules aimed at improving low wages, without however setting a uniform European minimum threshold, nor obliging the six countries which do not have one. to introduce one (Austria, Cyprus, Denmark, Finland, Italy, Sweden).

The announcements of a sharp increase in German, British and Spanish minimum wages come after two years of the Covid-19 pandemic, during which many precarious employees, some of whom were paid the minimum wage, were on the first or second line. But they also occur in a context of high inflation.

In December, the ECB estimated the price increase at 5% during the year 2021. A record which is explained by strong growth in energy prices and shortages of raw materials. This high inflation could persist in 2022, with the ECB expecting a return to normal in 2023 and 2024, with inflation around 2%. France is less affected by inflation: it was 2.8% in the country in 2021.

It remains to be seen whether raising the minimum wage systematically leads to a loss of competitiveness. “When you raise the level of the minimum wage too much, you run the risk of companies hiring less,” declared on BFMTV the Minister of the Economy, Bruno Le Maire, last September.

“Faced with the question of social inequalities and the value of work, governments are more tempted to bring the minimum wage up to standard in relation to the median wage. And this, all the more so since the American experiences, under Obama, and the German , with the introduction of a minimum wage in 2015, have had no adverse effects on employment”, explained Gilles Moëc, Chief Economist of AXA IM, interviewed by Les Echos. In contrast, recalls BFMTV, the increase in the minimum wage in Spain in 2019 had prevented the creation of 90,000 to 170,000 jobs and led to the destruction of 24,000 others, according to a study by the Bank of Spain.