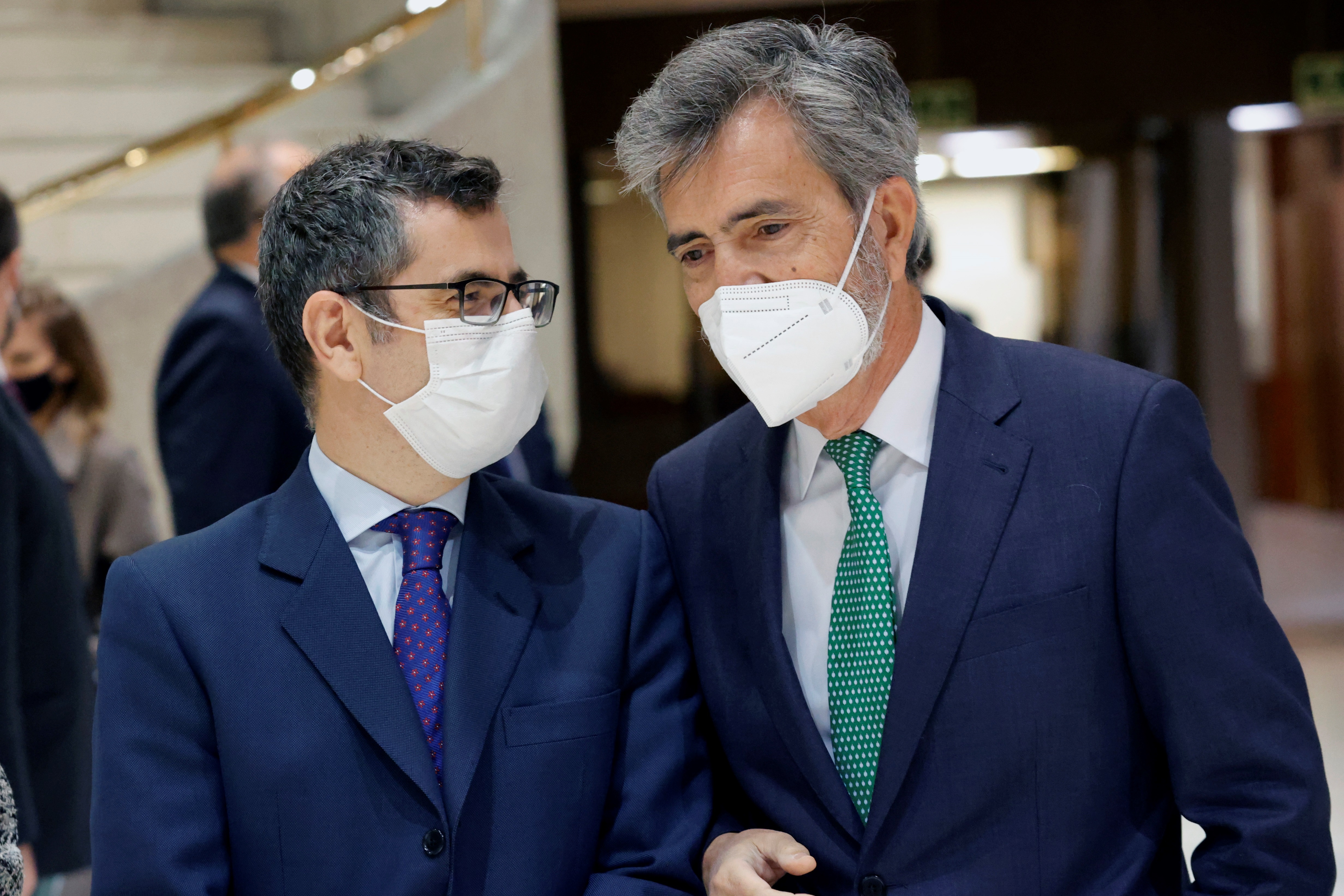 The Government had already warned that the report of the General Council of the Judiciary (CGPJ) contrary to the housing law was not going to imply any change in the draft of the norm that would force its approval to be delayed. And this Thursday, only a few hours after the governing body of the judges approved the text, the Executive has announced that it will take the current draft of the norm to a vote by the Council of Ministers next Tuesday, the decisive step that will allow the start of the parliamentary processing. “Once we have the report of the General Council of the Judiciary and a first analysis, there are no questions that cast doubt on the validity of the three articles on which it had to rule,” assured the Minister of Transport, Mobility and Urban Agenda Rachel Sanchez. In their department they have always maintained that what made the legal report mandatory was the reform of some articles of the Law of Civil Procedure on eviction procedures and they defend that the norm has been “looked at and reviewed by many jurists” during the process of elaboration.

The report of the CGPJ, which opposes the housing law for considering it a “clear limitation” of the autonomous powers in this matter, has gone ahead with the votes in favor of the same 15 members of the Council that two weeks ago knocked down the text prepared by the progressive Álvaro Cuesta, who endorsed the Executive’s norm (President Carlos Lesmes and members José Antonio Ballestero, Enrique Lucas Roser Bach, Ángeles Carmona, Victoria Cinto, Nuria Díaz, Juan Manuel Fernández, Rafael Fernández Valverde, Vicente Guilarte, Carmen Llombart, José María Macías, Juan Martínez Moya, Gerardo Martínez Tristán and Wenceslao Olea). Nor have there been any surprises at the other end: the six members who supported Cuesta’s report the previous time, all proposed by the PSOE or IU, have voted against the new text. Five of these members (Clara Martínez de Careaga, Álvaro Cuesta, Rafael Mozo, Concepción Sáez and Pilar Sepúlveda) have announced that they will sign private votes to show their rejection of the majority position.

In the same sense, some of the progressive members who intervened yesterday in the plenary session of the Council expressed themselves. The toughest, according to sources familiar with the meeting, was Supreme Court Justice Clara Martínez de Careaga, who stressed that the text written by José Antonio Ballestero and Enrique Lucas was very deficient from a technical and even grammatical point of view. The report, pointed out Martínez de Careaga, is confusing, messy and contains “inconsistencies”, criticisms from which the speakers defended themselves by alleging that they had barely had 10 days to write it since the plenary session knocked down the proposal of the progressive Cuesta on January 14.

During the plenary session, the member Concha Sáez, proposed by IU, also intervened, who, according to sources, reproached the conservative majority for having forced the preparation of a new report when, in her opinion, the objections that have been reflected in the new text could have been included in Cuesta’s. “I do not understand what we are doing here,” Sáez asked, according to these sources, implying that the staging of a new plenary session with a totally new report was unnecessary. Cuesta, for his part, also intervened to defend his report and stress that, with the new text, the CGPJ “exceeds its functions,” according to sources familiar with the meeting.

The report written by Cuesta and rejected by the majority of the plenary session will be the backbone of the particular vote that five of the six progressive members who yesterday voted against the Ballestero and Lucas text will sign. That vote, according to the sources, will also include an introduction that will define the right to housing and will defend the constitutionality of the bill. The text will also question some of the arguments of the report prepared by Ballestero and Lucas.

The plenary of #CGPJ approves the report on the draft Bill for the Right to Housing. The text has received 15 votes in favor and 6 against
📄 Information note: https://t.co/3mbfYwIKZE

The Council’s report is mandatory so that the Government can advance in the processing of the housing law, but its content is not binding and the Executive has already announced that it is not going to modify any essential aspect of its text. And, after knowing the text of the Council, the Government sees no more reason to delay the parliamentary processing of a rule to which it had committed a year ago. The tense negotiations between the two government partners were delaying that deadline until a consensus was reached last October on the draft. The promise was then to send the law to parliament before the end of 2021. But then the CGPJ report was filed, which was requested at the beginning of December, so there was no time to take it to the last plenary session before Christmas. An extraordinary session was convened on January 14, but the report proposal drawn up by the progressive Cuesta was rejected by the majority of the governing body of the judges and a new text was commissioned from Ballestero and Lucas.

In recent days, the socialist part of the Executive had been more open to considering the assessments of the governing body of the judges. The minister of the presidency, Félix Bolaños, accepted the possibility of introducing “improvements”, something that can be done during the parliamentary process. The position is different in United We Can. The Ministry of Social Rights, headed by Ione Belarra and co-sponsor of the law, met this Wednesday with associations of the movement for the right to housing and demanded that the law be sent “in its entirety” to Congress. In turn, the minority partner of the Government has been defending the possibility of introducing some amendments in line with the demands of these associations, which consider price control measures to be insufficient. This Thursday, Belarra has only spoken through a message on social networks. “The CGPJ, with its mandate expired three years ago, opposes the first housing law of democracy, which seeks to curb speculation and protect the right to housing set forth in the Constitution. It will happen as with same-sex marriage, they will end up proving us right, ”the minister wrote in a message on Twitter.

The main problem with the Government’s preliminary bill, according to the majority of the CGPJ, is that it invades the autonomous powers in housing and practically empties of content the regulations that communities have been endowing in recent years. The report approved this Thursday goes so far as to accuse the central Executive of “expropriating” that regional regulation and warn of the legal uncertainty that, in his opinion, this can generate. As EL PAÍS advanced, the law leaves in the hands of the autonomies the limitation of the rental price, the star measure of the draft. The report approved by the Council admits that the Government does not invade the powers of the autonomies in this case, but considers that, as the Executive does not have decision-making power there, the application of the state regulation is “excessively” conditioned. In addition, he believes that the Government conditions “in detail the basic rules to which the communities must abide”, which implies “a clear limitation of their powers of organization and management.”

Minister Sánchez has downplayed these considerations in her words. “I want to say in this regard that we respect and analyze them, but of course we confirm that the text of the law respects the Constitution and does not invade the powers of the autonomous communities,” he said. Sánchez has highlighted that “the Government has kept its word” when preparing the regulation and that “what it does is guarantee decent housing, avoid abusive rent increases, avoid speculation and therefore give an answer to a emergency situation experienced by many families”.

Read the report on the Housing Law approved by the judiciary