The Bourgogne-Franche-Comté Region has opened up the offer of TER trains to competition, by 2026. A vote of elected officials took place this Thursday, January 27 to validate the process. For what reasons ? And under what conditions ?

SNCF begins to lose its monopoly position in rail transport. The incumbent operator, which is celebrating its 84th anniversary this year, is seeing private operators arrive for national, but also regional transport.
The Bourgogne-Franche-Comté Region has had the delegation of regional transport since 2002.

It took place in the early evening of Thursday January 26 at the Regional Council of Bourgogne-Franche-Comté in Dijon. The regional councilors voted as follows:

The competition process for SNCF regional train lines (TER), proposed by Brussels in 2013, was voted on by the European Parliament in 2016 and was codified by a French law of 2018.

At the national level, the SNCF monopoly on TER trains ended in 2019. From 2020, the regions were able to launch calls for tenders or allocate lines to the SNCF.

At the moment, regions can “test the market” on a voluntary basis, but from December 2023, according to European regulations, calls for tenders for TER links will be mandatory at the end of operating contracts with SNCF. This has already been the case for the TGV lines since December 2020.

The Region, through its President Marie-Guite Dufay, wishes to “apply the law”. This is a first in France, an opening of 100% of regional lines to competition. This opening must come into force from the end of the current agreement with the SNCF in 2025. The first calls for tenders to private companies could therefore take place on January 1, 2026.

The Vice-President in charge of transport, Michel Neugnot, recalled in the session Thursday afternoon the context of the call for competition, which was delayed by the current agreement: “The agreement signed in 2018, put the term “after 2023 “, clearly.”

The 8 elected Communists spoke out against this opening. For Muriel Ternant, leader of the communist group at the Regional Council of Bourgogne-Franche-Comté, “we already know that multiplying operators, opening up to competition, that will involve degradations with losses of pooling with the different lines, a additional cost. We will have to manage complexities, manage interfaces. There will undoubtedly also be a problem of developing the transport offer which will become complicated.”

4 or 8 lots could be awarded to the competition, for contract periods of 7 to 10 years. The incumbent operator SNCF can of course respond to the calls for tenders which should be launched from January 1, 2026, among the other operators which could arrive on the French side: Keolis (subsidiary of the SNCF), Transdev and the RATP Dev. On the European side, Italian, German and Dutch rail operators. And maybe cooperative societies.

Michel Neugnot, Vice-President in charge of transport, wanted to be reassuring on the scope of the competition : the opening to competition of regional TER includes “two important entities”, Gare & Connexions and SNCF Réseau.
The first manages the 200 railway stations and stops in the Region, the other entity manages traffic and the organization of regional trains.
The vice-president hammered: “We have a territorial organization which is such that we have no interest in breaking this monopoly. It is SNCF Réseau which manages our very dense rail network. They are essential in our organization.
The second monopoly is the stations: I propose not to touch this monopoly. We must consider the work of restoring activity and life in our stations that we started with Gare & Connexions.”

Another point on which the Vice-President has committed himself is the offer to travellers: “Pricing will remain the same nationwide. 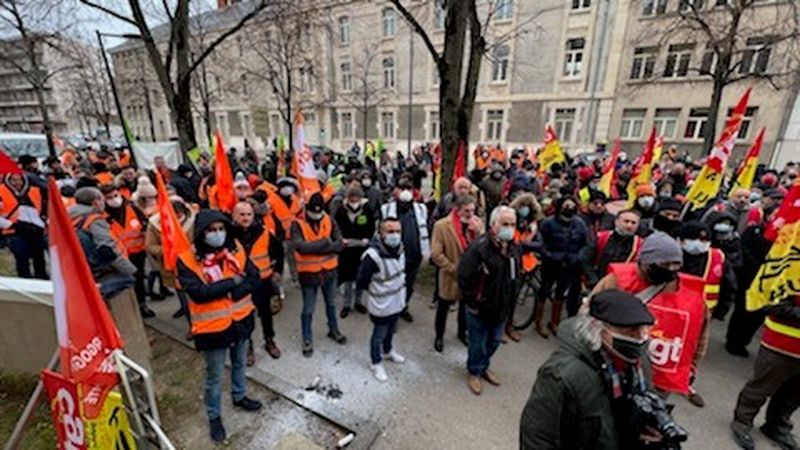 They were about 400 to demonstrate in the middle of the morning in front of the headquarters of the Regional Council of Bourgogne-Franche-Comté, made up of trade unionists and SNCF agents.
Gathered by the same inter-union voice CGT-UNSA-Sud Rail-CFDT, the railway workers refuse the opening to competition of TER trains. Already on Wednesday, the railway workers had mobilized in front of the headquarters of the Region in Dijon.

Nicolas Bay indicted after a complaint by rapper Médine

Indonesia: a ferry runs aground on a submerged island with more than 800 people on board

Van Bronckhorst with Rangers started the final against Frankfurt | NOW