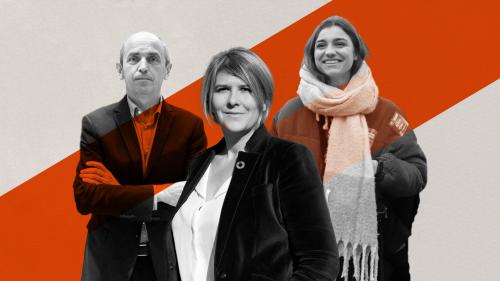 There are seven candidates on the starting line, but only four of them accept the rules of the game. Those registered in the Popular Primary are invited to vote from Thursday 27 to Sunday 30 January, to nominate, among seven personalities of left, the one that will be supported by the organization for the presidential election. The 466,895 registered voters will be able to vote on the internet. On the other hand, the main left-wing candidates (Jean-Luc Mélenchon, Yannick Jadot and Anne Hidalgo) still refuse to participate in this citizens’ initiative independent of political parties.

In the shadow of Christiane Taubira and other names from the left and ecology, three candidates are on the list. franceinfo presents them to you.

“To avoid Chaos, change the situation today”, here is the slogan of the popular primary candidate Pierre Larrouturou. Founder of the Nouvelle Donne party and author of the book Today, the spirit revolts, he was elected in 2019 to the European Parliament on an alliance list with the PS and Place Publique, and is currently budget rapporteur for Parliament European.

Pierre Larrouturou believes in rallying to the left. “I believe that unity is our only chance of winning, he said on franceinfo radio, on December 9. The primary works. Three months ago, no one thought there would be a primary on the right but the right was able to come together and there, we saw that Valérie Pécresse took 8 or 10 points in the polls. So the right came together. Are the left and the environmentalists irresponsible enough to do not do it ?”

If we come to this, it’s because if we don’t do anything for the climate for another 5 years, the consequences will be disastrous: hundreds of thousands of deaths within 20 years, first among the poorest. But hope can be reborn if we act pic.twitter.com/WzbytlseUy

What does the candidate offer? Among his main measures, a “finance-climate pact” which would represent a set of public aid for in particular the thermal insulation of housing, the massive development of public transport or even aid for farmers and the most precarious. But also a tax on speculation. according to him, would create 900,000 jobs. He also wants the four-day work week which he considers the potential for job creation at 1.6 million. Pierre Larrouturou is campaigning for the four-day week in order to “better distribute working time” and get out of precariousness and unemployment. Pierre Larrouturou also wants the establishment of a Sixth Republic, “more parliamentary”.

“I am indignant because there are concrete solutions which are economically credible and which the politicians refuse to put in place”, declared the candidate, Monday January 24 on franceinfo channel 27.

️ “I am a candidate to avoid collapse”

Public health consultant, Charlotte Marchandise, community activist, has been involved in politics since 2014. Deputy delegate for health at the socialist town hall of Rennes (Ille-et-Vilaine) for five years, she did not stand for a second term in 2020. The 47-year-old candidate had already run in 2017 and won the online citizen primary ballot laPrimaire.org. In the second round of this election, she got 32,685 votes against the other three candidates at the time. But the adventure had stopped there: she had only been able to gather 135 sponsorships from elected officials, out of the 500 required to run in the presidential election.

But this time, with 500 citizen sponsorships in hand, Charlotte Marchandise is once again committed to “putting citizens back at the heart of political debate, this is the first priority”, she explains to France 3 Brittany.

I maintain my presidential candidacy and submit myself to the vote of the #PrimaryPopular. Under no circumstances do I want to add an extra candidacy, and following the People’s Primary process, I will endorse the winner. https://t.co/HwLxzAn8oV pic.twitter.com/NlpkPLNvVL

What does the candidate propose? “What we do for you, we must do with you,” she announces on her profession of was and in his book Plus belle la politique. Among its main measures: the modification of article 89 of the Constitution to allow the citizens’ initiative referendum, one of the demands of the “yellow vests”, the establishment of a Sixth Republic called “democratic”, experimenting with a universal income and a sharing of working time or even bring the measures of the Common ground of the popular Primary.

“I consider that the only way to make people want to vote again is through democracy to allow us all to be together in the second round against the far right”, declared Charlotte Marchandise, Monday January 24 on franceinfo channel 27.

Around @MarCharlott to say more about his candidacy for the @PrimairePop

Environmental activist and co-founder of the association for the fight against industrial dangers “Our house is burning”, Anna Agueb-Porterie is the youngest of the ballot. She works in Aubervilliers (Seine-Saint-Denis) in a popular education association. Community union organizer, the candidate accompanies residents to fight against injustice.

If Anna Agueb-Porterie is a candidate for the People’s Primary, it is first of all “to make people feel fed up but also to convey a message of hope, to put life back at the heart of the subject of public debate in when everyone hears the most about politics”, she declared, Monday January 24 on franceinfo channel 27.

What does the candidate propose? Under her slogan “We, presidents”, Anna Agueb-Porterie advocates social ecology and direct democracy. Among its main measures : an overhaul of our democracies, an ecology breaking with capitalism, a social republic and commons. “My candidacy is intended to be a citizen incarnation in the face of political apparatuses”, she assures in her profession of faith. Finally, Anna Agueb-Porterie wants to “set up citizen conventions on all subjects of everyday life, at the local level so that it is adapted to the challenges of the territories.”

️ In her concluding minute, the candidate for the @PrimairePop, @AguebPorterie, wishes “to set up citizens’ conventions on all subjects of everyday life”

13 phrases from Riquelme: what happened to Battaglia after the draw against Godoy Cruz, his mother’s request and why “what Boca wins is little valued”