Xiomara Castro was sworn in this Thursday as the first female president of Honduras, a country hit by poverty, migration, drug trafficking and corruption and which he promised to refound as a “socialist and democratic” state.

“This historic day I will inform the Nation (…) about the social and economic tragedy that Honduras is facing and about my proposal to refound the socialist and democratic State,” Castro said in his first speech to the Nation at the National Stadium in Tegucigalpa. .

He assured that the efforts of his management until 2026 they will be focused on “education, health, safety and employment”.

It receives the country “in bankruptcy,” he assured. Honduras’s public debt amounts to 17 billion dollars, of which 11 thousand are international commitments.

The leftist leader was sworn in before Judge Carla Romero, flanked by Luis Redondo, president of the Congress recognized by the new ruler, after a parliamentary crisis. The congressman imposed the presidential sash before some 29,000 people.

62 years old and wife of the ousted former president Manuel Zelaya (2006-2009), Castro ended a 12-year supremacy of the National Party (PN, right) with a coalition led by his group, Libertad y Refundación (Libre).

The investiture had as stellar guests the Vice President of the United States, Kamala Harris, the King of Spain, Felipe VI, and the Taiwanese Vice President, William Lai. 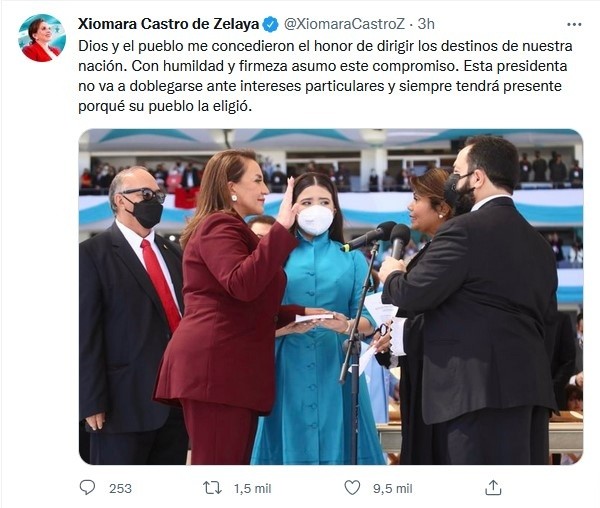 Castro proposes to improve a country where poverty reaches 59% of its almost 10 million inhabitants, according to official figures from 2019, although the NGO Social Forum on Foreign Debt and Development of Honduras (Fosdeh) places it at 71% (data from 2021).

She spoke of 74%. “This figure by itself explains the caravan of thousands of people of all ages fleeing to the north, Mexico and the United States, looking for a place and a way to survive regardless of the risk to their lives,” he said.

There is also a high homicide rate of almost 40 per 100,000 inhabitants., generated by drug cartels and gangs, to which is added the pandemic, causing strong migratory flows to the United States in search of employment.

“No more death squads, no more silence in the face of femicides, no more hired assassins, no more drug trafficking or organized crime”Castro also expressed.

His predecessor, Juan Orlando Hernández, has been accused by New York prosecutors of maintaining links with drug trafficking. His brother, former deputy “Tony” Hernández, is serving a life sentence in the United States for that crime. Both deny the charges.

Castro announced his cabinet, including Foreign Minister Eduardo Enrique Reina and Finance Minister Rixi Moncada. He will have his son, Héctor Zelaya, as private secretary, and José Manuel Zelaya, nephew, as Minister of Defense. In Honduras there is no nepotism law.

Her husband has accompanied her at all times. With him, before the inauguration, he toured the city in a convertible car.