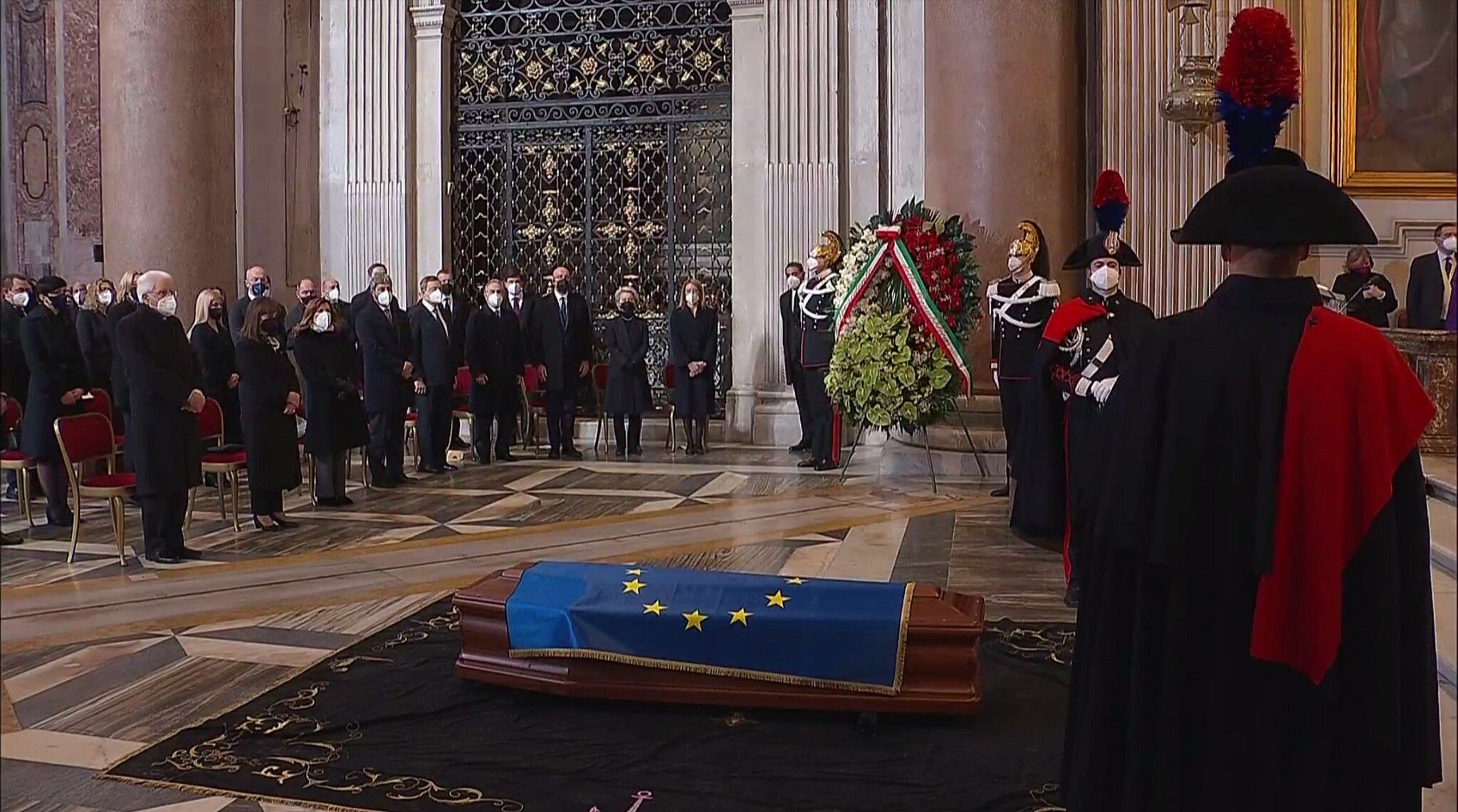 Brothers and sisters, (today more than ever this is the true title that unites us all to accompany our dear brother into the hands of the Lord) we have heard so many words in this unexpected goodbye, marked by the obvious injustice which tears a man out in all his vigor and activity. We are today in this ancient place, extraordinarily beautiful, facing the horizon of life, its limits, where heaven and earth meet. And that point is always love. The Word of God brings together all our words, which are basically all limited: he does not erase them, on the contrary, he makes them his own but clarifies them, he explains them to us, imbuing them with meaning and eternity because the first and the last letters of the alphabet of God, the alpha and the omega, are letters of love.

Jesus listens to our words, he makes them his own even today, just as he listened to those of two of his disciples on the first Sunday, wounded and saddened by the disappearance of a friend, by the hope that seems to be fading. Precisely today, as at the table of Emmaus and on this altar, we recognize Jesus, friend of men, breaking bread, he who becomes food of love only, panis angelicus, bread of eternal life. And, we need love so much, in truth always and in truth all. We struggle to understand the ending, with its unacceptable finality. John Donne wrote that “The death of any man diminishes me because I belong to the human race”, because “no man is complete in himself”. We should remember it always, for everyone, especially for those whom no one remembers alive. And let’s also remember the opposite, that if someone saves a man – a man – saves the whole world.

We share your pain Alessandra, you who walked with David, hand in hand, from the school benches, Livia and Giulio, his siblings and all those who considered him “one of us”, almost instinctively , for his air devoid of presumption, of otherness, for his empathy, in short, he was a bit for everyone, a classmate! David helps us to look at the sky – sometimes so big that it can frighten us, make us dizzy – he who always sought it, a Christian in search and nevertheless convinced, who breathed faith and Catholic commitment, democratic and civil, at home, surrounded by the many friends of his dad and then his own, impetuous and passionate believers like Giorgio La Pira or Mazzolari, like Davide Maria Turoldo, whose name he bears.

A serene believer without however avoiding doubts and difficult questions, trusting in the love of God, the source of his commitment, which he always shared with someone, as it should be, because the Christian, like any man t is not an island, but still has a community within which it can live the commandment to love one another: the scouts, the group of the White Rose with Paolo Giuntella (Sophie and Hans Scholl, leaders de la Weiss Rose, killed by the Nazis for their freedom, were for him the morning stars of Europe, so much so that when he was elected President he honored them by placing a huge white rose on the European background in parliament because “our history is written in their desire for freedom”). He shared his “I Care” with many – I am thinking, for example, of the Church of Rome of February 74 and of Don Luigi Di Liegro – always uniting his personal faith with his commitment to history, beginning with the last, the victims who “all have the same eyes”, with respect and grace, as was his character. Some affirm that the Christian is a lord precisely because he is a Christian, even if he has nothing, because he possesses a treasure of love which makes him such. A poor person who enriches others.

The Gospel speaks to us of Beatitudes. Attention, it is not different from human happiness, it is even fully about happiness, precisely the one we are all looking for. The bliss of the gospel is not an ultimate, painful reward in exchange for sacrifice, but the liberation from the countless pornographic caricatures of individual welfare bliss at all costs. There is no solitary joy! The joy of the Gospel unites and does not separate one from another. We are not looking for an artificial but real and lasting joy.

I must say that seeing all the love that has been shown around David and his family these days, I understand more clearly that joy comes from giving to others and then, that, only after having given it, one always receives because the joy is in being and not in having, in the fact of thinking oneself for someone and not in seeking one’s own interest. Blessed are the poor in spirit, those who do not know everything, on their own, but who, on the contrary, know that they are not rich and do not pretend to be, to the point of not asking forgiveness or help, those who learn and seek. Blessed are the afflicted: not those who seek suffering, but those who do not flee in the face of difficulties, and face them out of love and who, out of love, cry for the loved one. Blessed are the meek, those who do not seek straw in another, but the gift that is made there, those who do not respond to evil with evil, those who, with kindness, seek to do to others what they would like us to do to them.

I believe that, we all keep in our hearts, David’s smile, the first gesture to welcome and respect the other, without complacency, with simplicity. Someone said he never saw anyone mad at David! Blessed are those who hunger and thirst for justice, those who cannot be well if someone suffers next to them, those who do not change channels or pretend not to see or think it does not concern them, if for example, a person is in danger in the middle of the sea or in the cold outside your door. They are hungry for justice because they do not get used to injustice and remember that the justice of God is to take care of the smallest brothers of Jesus and that the suffering of the other is also mine.

Blessed are the merciful, those who judge but always with love, those who seek the hidden good, those who think there is always hope, those who choose to comfort rather than cause suffering. Blessed are the pure in heart, those who see without malice, not because they are naïve, but because they see well, in depth, devoid of all calculation, of propriety, disinterested because they have a much greater interest, those who do not have prejudices when approaching a discussion, who are not afraid to understand the position of the other, even if it is distant from their own, who do not shout but listen, because they know that there is always something to learn. Blessed are the artisans of peace, those who do not renounce “making peace” beginning with small gestures of attention, “soiling their hands with life”, the contradictions of their neighbour, the effort to forge ties with the enemy who then turns into a brother. Blessed are those persecuted for justice, not the one who coldly divides the cake into equal parts even if those who must eat it are not equal, as revealed, in a rigorous way, a just man, like don Milani, because to love everything the world, you have to start by loving the many (how many are there!) “Gianni” (first name which means “Jean” and which could be a symbolic first name here) who have no chance.

God seems to be telling us precisely by proclaiming the beatitudes that everyone has the right to happiness, that is what he wants, and that it does not end. Let’s ask ourselves what we have to give to others so that they are happy, because my happiness is also theirs. It’s exactly what someone said very wisely, that you always have to see life through the eyes of others. For that, thank the Lord for David. He was happy even in distress, during his illness which he welcomed with dignity, enduring it, devoting himself to the end, inviting everyone to look far ahead, living by the strength of his ideals and the love that surrounded and accompanied him so much. For a believer, bliss is obeying his conscience and purifying his intentions from the basis of other choices.

This is the perfect bliss that David lives today and that his life reminds and transmits to us. David was a supporter, but in favor of all, because what he was defending was the person. This is why politics was, for him, and should exist for the general interest and democracy, inclusive, humanitarian and humanist. That is why he wanted a united Europe, strong in its founding values, which he served so that its institutions functioned, which he loved because he was a child of the generation which had seen the war and the horrors of genocide and nazi and fascist pagan violence, many nationalisms, a son of the resistance and its values, on which our Republic is founded and which inspired our founding fathers. It was from this immense suffering – the one for which he wanted the President to go to Fossoli, one of the many places of suffering from the barbarism of war – that his commitment was born. No ideologies, but ideals, no calculations, but a vision, because Europe cannot live for itself either, because Christianity is not an idea, but a person, Jesus, who passes through people and history.

I make mine the words of his last goodbye, on the occasion of Christmas greetings, when he was already very ill, and today he is born to life in heaven. “This year we listened to the silence of the planet and we were afraid, but we reacted and built a new solidarity because no one is safe alone. We have seen new walls, our borders have become in some cases borders between the moral and the immoral, between humanity and inhumanity. Walls erected against people asking for shelter from the cold, from hunger, from war, from poverty. We have finally realised, after years of cruel rigorism, that inequalities are no longer either tolerable or acceptable, that living in precariousness is not human, that poverty is a reality that must not be hidden, but which must to be fought and overcome. The duty of the European institutions is to protect the weakest and not to demand further sacrifices, adding pain to pain. Merry Christmas… Christmas time is when hope is born and hope is us, when we don’t close our eyes to those in need, when we don’t put up walls to our borders, when we fight against all injustices. All my wishes for a Merry Christmas, to us, to our hope”. Thank you, man of hope for all.

David Maria Turoldo wrote a poem that David knew by heart: “God of life, it is you who is born, who continues to be born in each life. Voice for the one who dies now: because he does not die, no one dies: nothing and no one dies because You are. You are and everything lives, it is the All that lives in you: even death! “.

May Jesus embrace you in his great mercy. Good road. Rest in peace and may your smile always remind us to seek happiness and build hope, All brothers (All brothers).